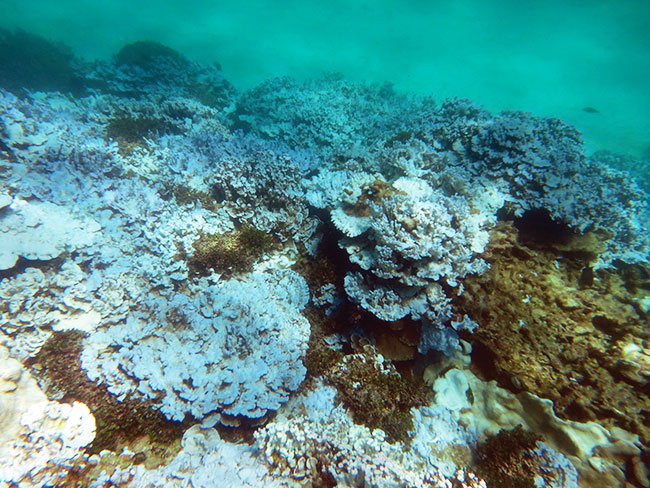 With some leading coral biologists fearing the globe’s worst recorded coral bleaching event unfolding in the waning days of 2015, the signs are especially ominous in the reefs of U.S. waters.

As record ocean temperatures cause widespread coral bleaching across Hawaii, NOAA scientists confirm the same stressful conditions are expanding to the Caribbean and may last into the New Year of 2016, prompting the declaration of the third global coral bleaching event ever on record.

Waters are warming in the Caribbean, threatening coral in Puerto Rico and the U.S. Virgin Islands, NOAA scientists said. Coral bleaching began in the Florida Keys and South Florida in August, but now scientists expect bleaching conditions there to diminish.

“We’re in shock and awe of what’s happening,” Professor Ove Hoegh-Guldberg said in an interview with the journal Nature. One of the world’s experts on climate change and a marine scientist at the University of Queensland in Brisbane, Australia, Dr. Hoegh-Guldberg is not mincing words: “It’s a doozy of an event.”

“The coral bleaching and disease, brought on by climate change and coupled with events like the current El Niño, are the largest and most pervasive threats to coral reefs around the world,” said Mark Eakin, NOAA’s Coral Reef Watch coordinator. “As a result, we are losing huge areas of coral across the U.S., as well as internationally. What really has us concerned is this event has been going on for more than a year and our preliminary model projections indicate it’s likely to last well into 2016.” 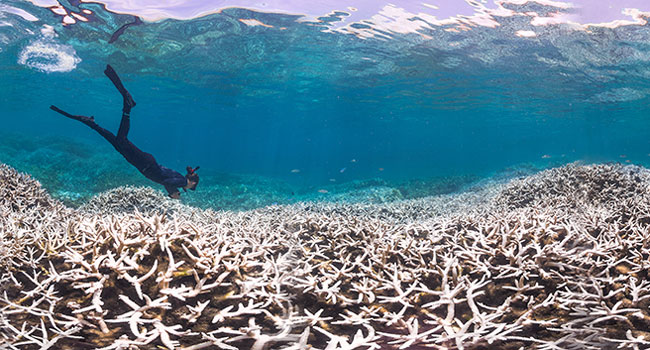 Killer Events
While corals can recover from mild bleaching, severe or long-term bleaching is often lethal. After corals die, reefs quickly degrade and the structures corals build erode. This provides less shoreline protection from storms and fewer habitats for fish and other marine life, including ecologically and economically important species.

This bleaching event, which began in the North Pacific in summer 2014 and expanded to the South Pacific and Indian Oceans in 2015, is hitting U.S. coral reefs disproportionately hard.

NOAA estimates that by the end of 2015, almost 95 percent of U.S. coral reefs will have been exposed to ocean conditions that can cause corals to bleach.

The biggest risk right now is to the Hawaiian Islands, where bleaching is intensifying and is expected to continue for at least another month. Areas at risk in the Caribbean in coming weeks include Haiti, the Dominican Republic, and Puerto Rico, and from the U.S. Virgin Islands south into the Leeward and Windward islands.

The next concern is the further impact of the strong El Niño, which climate models indicates will cause bleaching in the Indian and southeastern Pacific Oceans after the New Year. This may cause bleaching to spread globally again in 2016.

“We need to act locally and think globally to address these bleaching events. Locally produced threats to coral, such as pollution from the land and unsustainable fishing practices, stress the health of corals and decrease the likelihood that corals can either resist bleaching, or recover from it,” said Jennifer Koss, NOAA Coral Reef Conservation Program acting program manager. “To solve the long-term, global problem, however, we need to better understand how to reduce the unnatural carbon dioxide levels that are the major driver of the warming.” 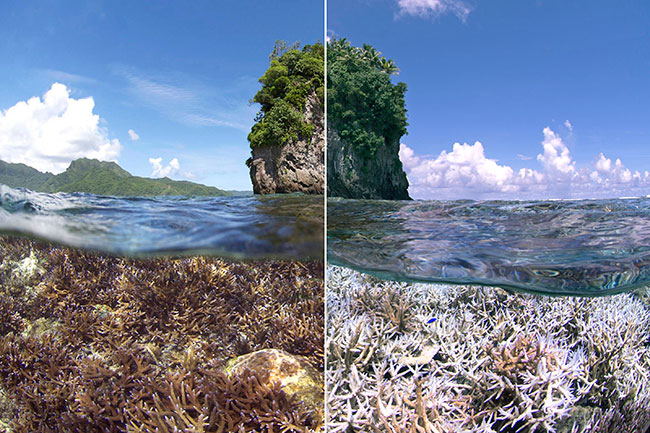 American Samoa: Coral reef in 2014 (before bleaching) and in 2015 (after). Image: XL Caitlin Seaview Survey.

The current high ocean temperatures in Hawaii come on the heels of bleaching in the Main Hawaiian Islands in 2014 ― only the second bleaching occurrence in the region’s history ― and devastating bleaching and coral death in parts of the remote and well-protected Papahānaumokuākea Marine National Monument in the Northwestern Hawaiian Islands.

“Last year’s bleaching at Lisianski Atoll was the worst our scientists have seen,” said Randy Kosaki, NOAA’s deputy superintendent for the monument. “Almost one and a half square miles of reef bleached last year and are now completely dead.” (See image at top of page.)

Coral bleaching occurs when corals are exposed to stressful environmental conditions such as high temperature. Corals expel the symbiotic algae living in their tissues, causing corals to turn white or pale. Without the algae, the coral loses its major source of food and is more susceptible to disease.

The first global bleaching event was in 1998, during a strong El Niño that was followed by an equally very strong La Niña. A second one occurred in 2010. 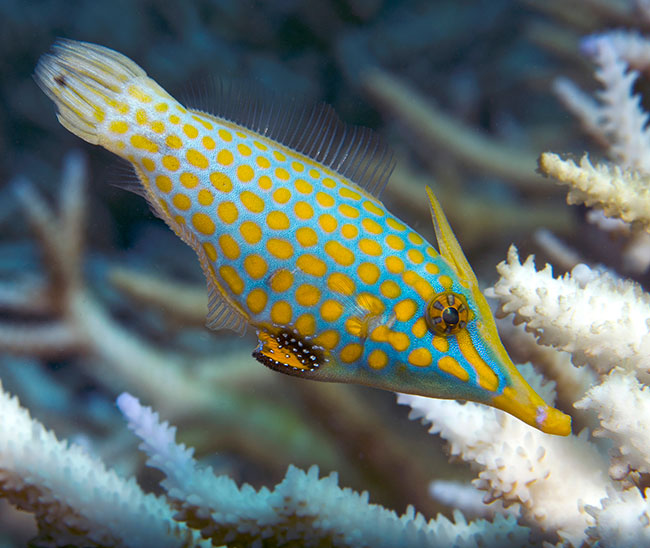 Many experts are voicing fears that the 2015-2106 event will prove the most calamitous yet. Prof. Ove Hoegh-Guldberg, director of the Global Change Institute at the University of Queensland, Australia, says that the oceans are now on track for “the worst coral bleaching event in history.”

“The development of conditions in the Pacific looks exactly like what happened in 1997. And of course, following 1997 we had this extremely warm year, with damage occurring in 50 countries at least and 16% of corals dying by the end of it,” he says. “Many of us think this will exceed the damage that was done in 1998.”

Early images coming out of Hawaii appear to support these fears. 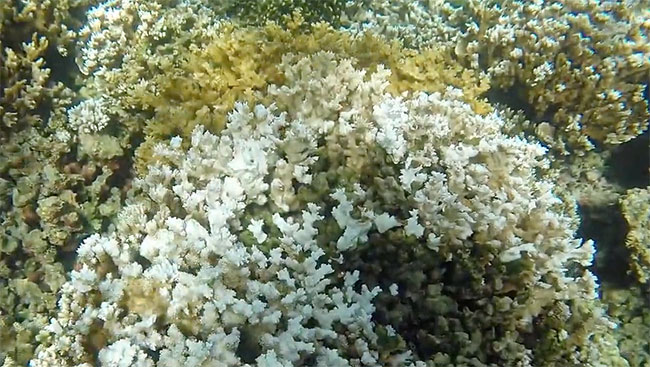 For more information on coral bleaching and these products, visit: http://www.coralreefwatch.noaa.gov/satellite/index.php.

The outlooks were developed jointly by NOAA’s Satellite and Information Service and the National Centers for Environmental Prediction through funding from the Coral Reef Conservation Program and the Climate Program Office.

October 2015-January 2016: NOAA’s standard 4-month bleaching outlook shows a threat of bleaching continuing in the Caribbean, Hawaii and Kiribati, and potentially expanding into the Republic of the Marshall Islands. (Credit: NOAA)