Here is a very brief, tantalizing and brand-new footage of the captive-bred hybrid of Pomacanthus (annularis X imperator), the resultant offspring from the mating between an Annularis (Blue Ring) Angelfish, and an Emperor Angelfish.

The fish shown above, accidentally produced by Bali Aquarich, was initially noticed as a juvenile for having markings uncharacteristic of juvenile Annularis siblings. 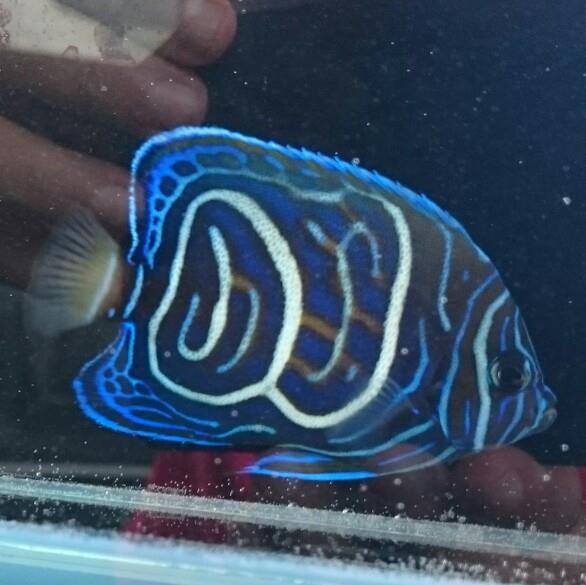 The first inklings of proof that this “annularis” wasn’t in fact an Annularis at all!

Of course, there was the outside chance that this could have also been a pure-blood Emperor (I was an outright skeptic), but waiting through full adult coloration to develop, it’s now clearly evident as the hybrid it is; the intermediate color and body shape are very apparent. 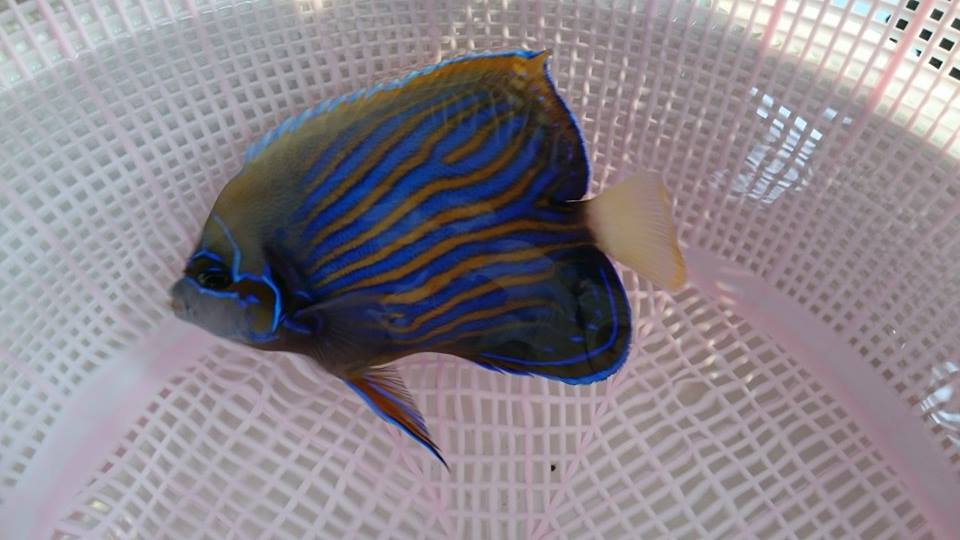 The captive-bred accidental hybrid of Pomacanthus annularis and P. imperator, shown in adult colors and ready to be shipped to Hong Kong.

It is in fact possible that other hybrids have left the ponds of Bali Aquarich for destinations around the world, including the U.S.

Wen-Ping Su, the man behind Bali Aquarich’s storied offerings, first noted the possibility of this hybrid with a photo published by Quality Marine. 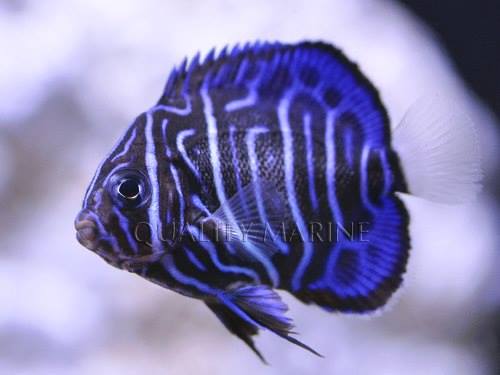 Could this captive-bred Annularis Angelfish, photographed by Eli Fleishauer of Quality Marine in early 2015, actually be a hybrid of Pomacanthus (annularis X imperator)? This image was one of the first to get Wen-Ping Su of Bali Aquarich speculating on his private Facebook page.

Perhaps some other unsuspecting aquarists have received fishes sold as captive-bred “Annularis” that will turn out to be this hybrid. Ironically, in the freshwater world, this tends to drive aquarists insane, and often dramatically reduces the credibility of farms and suppliers in the eyes of consumers who are “not getting what they bought.” But, with the fish in the video being shipped to Hong Kong, and rumored to be retailing at a price higher than some folk’s yearly wages, such a hybrid might be a welcomed and exceedingly rare surprise!

Hybrids like these could be the key to financial viability of marine aquaculture in the near term, a concept I first wrote about earlier this year with regards to intentionally hybridizing the dwarf Centropyge spp. Man-made hybrids lack any price competition from wild-caught fishes, allowing more routine market forces to set prices, and allowing vendors to ask prices that account for the actual cost in rearing the fishes without having to justify the price point as being “higher than wild-caught.” Surely some hybrids may wind up uninteresting, but others like this could become bread-and-butter productions at a price higher than pure-bred versions of the parental species would fetch. Of course, if hybrids like this continue to only be “accidents”—one-offs—the pricing will stay stratospheric for a long time to come!

It’s interesting to see these concepts play out in the relatively young field of ornamental marine fish aquaculture. While we’re a long way off from ever seeing something comparable to, say, the diversity of forms seen in Discus, it is not entirely unrealistic to see such tinkering happen now and again (there are a few hybrid Pseudochromis Dottybacks out there that are quietly but consistently being made available by ORA and Sea & Reef Aquaculture).

Since the production of Pomacanathus angelfish will likely remain solely the domain of large farm-scale operations, the conservation concerns of “unknown” hybrids slipping into hobbyist breeding efforts seem non-existent, while it’s easy enough for these large scale farms to ensure clean species lines if needed (and I’d encourage them to do so). This time around, farms have the benefit of knowing what they’re working with, which wasn’t always the case with, say, African Cichlids in the 1970s. Taking away these concerns might allow for enterprising breeders like Wen-Ping Su to support their facilities with captive-bred offerings we have yet to even imagine. In that regard, it would seem that the hybridizing history of the freshwater aquarium hobby certainly is destined to repeat itself.