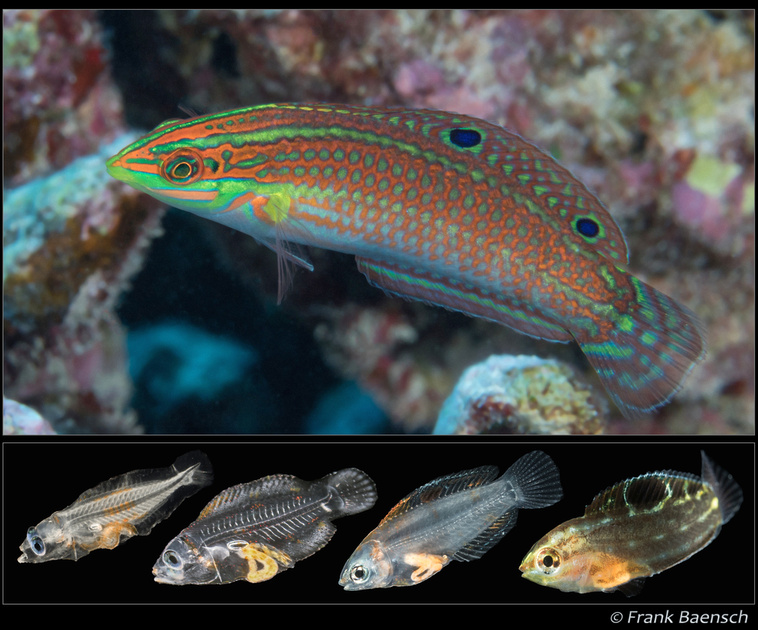 Frank Baensch’s success in creating the first captive-bred Butterflyfish is the first we are aware of (probably the first in the world), but about a month earlier (September 1st, 2015), Baensch quietly shared that he had also successfully spawned and reared the Hawaiian Christmas Wrasse, AKA Ornate or Ornamented Wrasse, Halichoeres ornatissimus, acheiving this success in his private Hawaiian laboratory.

With that, Baensch joins a very small group of aquarists and marine fish propagators who have successfully captive-bred ornamental tropical wrasses. Only Wen-Ping Su (who inadvertently reared the Cleaner Wrasse, Labroides dimidiatus, at Bali Aquarich in 2013) and Kevin Barden (who succeeded breeding the Melanurus Wrasse, Halichoeres melanurus, earlier in 2015) are members of this elite group at the moment.

Then again, researchers have also reared some non-aquarium species of wrasses in the past, including the Humphead Wrasse, Cheilinus undulatus (reported reared in 2003), and a temperate Rainbow Wrasse, Parajulis poecilepterus, which was reared in 1993. Baesnch reports that “Several temperate wrasse species (goldsinny, rock cook, corkwing, ballan wrasse) are aquacultured as cleaner fish to combat sea-lice infestation in salmon farms.”

Overall, many fish breeders and researchers have been trying to breed wrasses, and generally failing, for a long time. But perhaps the tide has turned.

Baensch’s results and observations of breeding H. ornatissimus are similar in many respects to what Barden reported in his home-based success with H. melanurus. Baensch started this project with a male and two females collected off the coast of Oahu. Three weeks later, he had his first captive spawns, which occurred daily at 4 pm (with pre-dusk approaching in the tropics). Given the small adult size of H. ornatissimus, and the ease with which they came to spawn, Baensch’s success suggests that other small wrasses like these could be at the upper cusp of what a home hobbyist could potentially tackle, albeit initially not without a ton of headaches in the larval rearing department.

Baensch remarked, “Now those were fun to raise!” when our discussions turned from his recent success being the first in the world (that we are aware of) to successfully achieving a captive-bred butterflyfish to this earlier accomplishment with the Hawaiian Christmas Wrasse. In his initial reporting of this success, Baensch described these wrasses as “difficult to rear,” citing a delicate and small-mouthed early larval stage. First foods were reportedly Parvocalanus copepod nauplii and “ciliates (primarily Strombidium sp.).”

Cultured and wild copepods were used in the second stages of larval development; it’s difficult for me to ascertain how important wild plankton may have been in this project, given that many other animals which at first were reared using wild-plankton ultimately did not require it once protocols were worked out. This could prove an area ripe for hobbyist research—can these be reared without the use of wild-harvested plankton? Given that the fish weaned over to more standard fare before settlement, I’m optimistic.

Cultured Wrasses In Our Future?

It would seem that Baensch shares some optimism about the potential for captive breeding of aquarium wrasses, as does Kevin Barden who basically issued an open casting call for hobbyists to join him at attempting to culture small aquarium wrasses at the 2015 MBI Marine Breeder’s Workshop back in July, 2015.

Unlike Baensch’s outlook on Chaetodontid culture at a commercial level, Baensch sees hope for species like Halichoeres ornatissimus in aquaculture: “Juvenile H. ornatissimus appear ideally suited for aquaculture. They are attractive, hardy, fast growing, and not aggressive toward each other at higher stocking densities.”

“The biology of many wrasse species, especially those with shorter natural larval durations, is probably quite to amenable to aquaculture,” wrote Baensch in a recent email exchange. He continued, “So, given the number of gorgeous fish in this family, there’s lots of work to be done.”

While we’ll hopefully save some further details for a future issue of CORAL Magazine, I’ll leave you with the following remark: while he hasn’t outright admitted it, I get the impression that Baensch found that success with the wrasses came more smoothly than his rearing work with Chaetodon klienii!