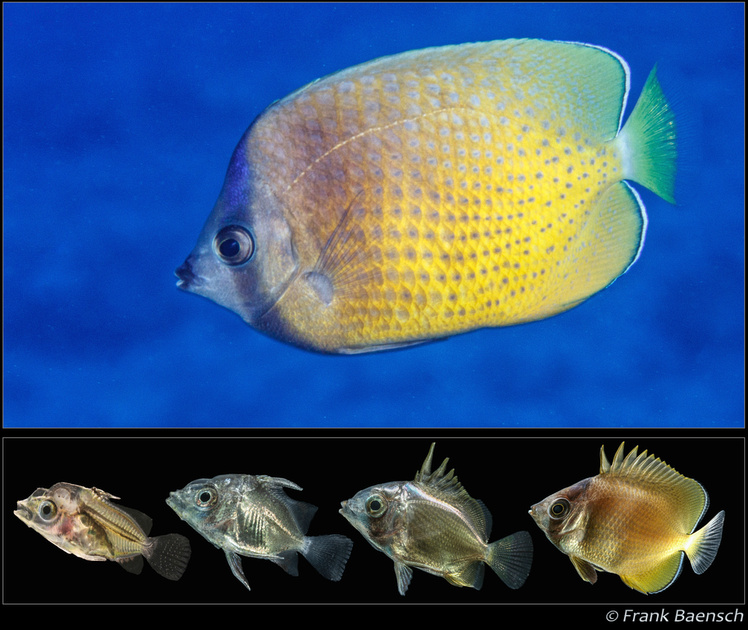 Frank Baensch is no stranger to pioneering work with the culture of ornamental marine aquarium fishes, playing a pivotal role in laying the groundwork for the captive propagation of marine angelfishes, primarily from the genus Centropyge, first accomplished by Baensch some 14 years ago. Last year, we shared Baensch’s success captive-rearing the Schooling Bannerfish, Heniochus diphreutes, from wild-collected eggs, making it a great achievement but just avoiding the definition of a truly captive-bred marine fish.

This year, working in his home laboratory in Hawaii, Baensch ticked off that one extra box, the successful rearing of the Sunburst or Klien’s Butterflyfish, Chaetodon kleinii, using laboratory-spawned eggs. The news was dated October 1st, 2015, another big “first” for Frank Baensch, ever modest and working independently and without government or institutional funding.

“Two C. kleinii adults were collected as a mated pair off Oahu and conditioned in a 100-gallon tank on a mixed seafood diet. The pair spawned immediately after being introduced to the broodstock tank and then periodically following a 3-month period of photoperiod and temperature manipulation. Spawns of up to 2,500 eggs with 30% fertility were recorded,” wrote Baensch.

From there, the 0.7 mm pelagic eggs hatched into 2.1 mm prolarvae, which began feeding 3 days later at a length of 2.6 mm. Baesnch reports the period of flexion (when the caudal fin develops) occurring between 18 and 25 days post hatch, with the larvae growing from 5.6 to 6 mm during that time period. All told, it took 94 days for the fishes to completely settle and transform into juvenile butterflyfish. Of course, everyone wants to know what the fish were fed during this time period. As Baensch reports; “The larvae were raised in multiple tanks on various live food mixes of rotifers, cultured copepods and wild plankton. Only larvae fed predominantly wild plankton survived through settlement.”

Baensch provided further details on the process, both in the initial online release and in private conversations, but the big-picture question is whether this will open the door to commercial aquaculture of Chaetodontids?  Baensch provided both background, and insights.

“Since the very early days of RCT [Reef Culture Technologies], a big part of my mission has been to find new aquarium reef fish species that have a life history which can potentially be adapted for aquaculture,” wrote Baensch. “Ideally this means that adult spawning and rearing of the larvae should be relatively uncomplicated and inexpensive – accomplished by anyone with fish culture experience in a basement, away form the ocean using 100% cultured foods. But at the very least, the culture of this species should be COMMERCIALLY VIABLE on some level by someone like Mr. Su at Bali Aquarich, spawning fish and raising the larvae in giant multi ton concrete pools using natural seawater; or the Taiwanese groups that strip spawn wild angelfish fish and raise the larvae in ponds.”

Turning to the Sunburst Butterflyfish he just reared, Baesnch remarked, “C. kleinii is a species with a long larval stage that with a lot of effort and the best nutrition that I could provide still has very poor survival. Very little aquaculture potential there so far, at least from a larval rearing perspective.” However, Baensch remains optimistic. “The good news I would say is that C. kleinii makes an excellent guinea pig/lab rat for the experimental rearing of Chaetodon larvae – to further grind through the bottlenecks of this group. It is a durable species, can be housed as pairs in relatively small tanks, forms strong pair bonds and responds to temperature and photoperiod conditioning.”

As an aquarium fish, the Sunburst Butterflyfish is generally considered one of the more ideal butterflyfish species, as a hardy and eager to please species. Success with C. kleinii is also particularly noteworthy as this is one of the species often cited as a possible alternative to fishes like the Copperband Butterflyfish (Chelmon rostratus) in the war against pest anemones like Aiptasia in reef aquarium. Generally suggested by the trade as  a “reef safe with caution” butterflyfish species, C. kleinii has mixed reports about leaving desirable reef life alone (Zoanthids, Leather Corals, and yes, even SPS are sometimes cited as being on the menu). Universally, however, they seem very eager to consume Aiptasia, keeping them at bay.

For more of the initial story (including more information on larval development time-frames and milestones), see the Hawaii Larval Fish Project Blog’s story on the Larval Rearing of Chaetodon kleinii. CORAL Magazine hopes to share more photos and details in an upcoming issue of the Magazine.