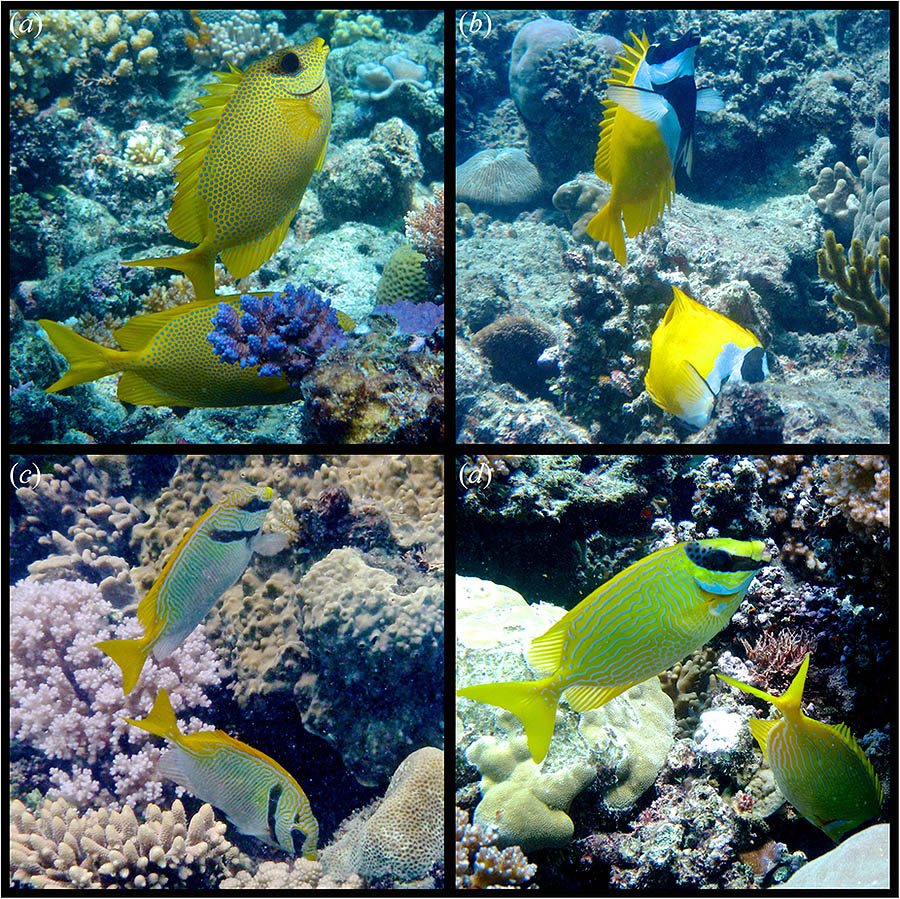 The foraging individual (in the head-down position) feeds in cracks and crevices in the substratum, while the vigilant individual is positioned in the water column with its head up. Note the obstructions to the visual field of the forager, suggesting high vulnerability to predation and the unobstructed field of perception of the vigilant fish. (a) Siganus corallinus, (b) S. vulpinus, (c) S. doliatus, (d) S. puellus. Images: Jordan Casey.

It is commonly believed that cooperation without immediate rewards is rare among non-human animals, especially when the individuals involved are not kin or playing a parental role. The relatively few examples of reciprocal cooperation in the animal kingdom previously documented were reported in certain warblers, vampire bats, Norway rats, and female baboons.

Now, researchers at James Cook University on Australia’s Great Barrier Reef have documented an extraordinary system of teamwork among pairs of herbivorous rabbitfishes, family Siganidae, with partners offering each other “coordinated vigilance” during grazing sessions when the fish are especially vulnerable to falling prey to larger carnivores. 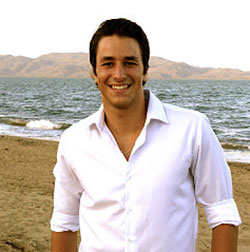 Or, as the press office at Australia’s ARC Centre of Excellence for Coral Reef Studies at Townsville distilled the findings, “I’ve got your back – fishes really do look after their mates! When it comes to helping each other out, it turns out that some fish are better at it than previously thought.”

New research from the ARC Centre of Excellence for Coral Reef Studies at James Cook University has found that pairs of rabbitfishes will cooperate and support each other while feeding.

While such behaviour has been documented for highly social birds and mammals, it has previously been believed to be impossible for fishes.

“We found that rabbitfish pairs coordinate their vigilance activity quite strictly, thereby providing safety for their foraging partner,” says Dr. Simon Brandl, who was working toward his doctorate under noted ichthyologist Dr. David Bellwood, co-author of the paper reporting the new findings.

“In other words, one partner stays ‘on guard’ while the other feeds – these fishes literally watch each others’ back,” Dr. Brandl says.

“This behaviour is so far unique among fishes and appears to be based on reciprocal cooperation between pair members.”

Reciprocal cooperation, which requires an investment in a partner, which is later reciprocated, is assumed to require complex cognitive and social skills—skills that fishes have previously been deemed not to have.

The guard partner, oriented vertically in the water column, is exposed to potential predation and is expending precious energy while not grazing. The rabbitfish in the feeding position is able to browse more freely and rapidly than if grazing solo, the researchers observed. Pairs switched positions at intervals in a display of complex coordination not previously known in these fishes. Pairs of Syganids were both male-female matches and same-sex duos, the studies of dozens of rabbitfishes of different species showed. 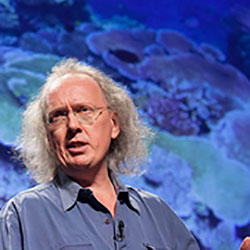 Dr. David Bellwood, noted Australian ichtyologist and coauthor of the paper: “We have to revise our thinking about fishes as being mindless automatons.”

Yet, Dr. Brandl says their research shows clear coordination and presents intriguing evidence for reciprocal cooperation between the rabbitfish pairs.

Co-author Prof. Bellwood, also from the Centre of Excellence for Coral Reef Studies, says that our perception of fishes as cold, scaly automatons is slowly changing.

“Our findings should further ignite efforts to understand fishes as highly developed organisms with complex social behaviours,” he says. “This may also require a shift in how we study and ethically treat fishes.”

“There has been a long-standing debate about whether reciprocal cooperation can exit in animals that lack the highly developed cognitive and social skills found in humans and a few species of birds and primates,” Dr Brandl says.

“By showing that fishes, which are commonly considered to be cold, unsocial, and unintelligent, are capable of negotiating reciprocal cooperative systems, we provide evidence that cooperation may not be as exclusive as previously assumed.”

Abstract
Reciprocity is frequently assumed to require complex cognitive abilities. Therefore, it has been argued that reciprocity may be restricted to animals that can meet these demands. Here, we provide evidence for the potential presence of direct reciprocity in teleost fishes. We demonstrate that in pairs of coral reef rabbitfishes (f. Siganidae), one fish frequently assumes an upright vigilance position in the water column, while the partner forages in small crevices in the reef substratum. Both behaviours are strongly coordinated and partners regularly alternate their positions, resulting in a balanced distribution of foraging activity. Compared to solitary individuals, fishes in pairs exhibit longer vigilance bouts, suggesting that the help provided to the partner is costly. In turn, fishes in pairs take more consecutive bites and penetrate deeper into crevices than solitary individuals, suggesting that the safety provided by a vigilant partner may outweigh initial costs by increasing foraging efficiency. Thus, the described system appears to meet all of the requirements for direct reciprocity. We argue that the nature of rabbitfish pairs provides favourable conditions for the establishment of direct reciprocity, as continuous interaction with the same partner, simultaneous needs, interdependence, and communication relax the cognitive demands of reciprocal cooperation.