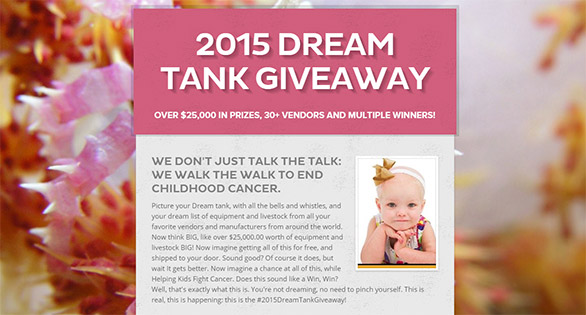 We don’t just talk the talk: We walk the walk to end childhood cancer.

Every once in a while there’s an idea that gets everyone to cooperate towards a common goal in ways that otherwise just don’t seem to happen. The 2015 Dream Tank Giveaway, organized by Felix Bordon of Reef Savvy, is proving to be such a movement.

An ever-growing list of marine aquarium industry vendors and service providers have once again come together under Bordon’s leadership to offer over $25,000 in prizes to multiple winners, with all proceeds directly benefiting St. Jude Children’s Research Hospital, in Miami, Florida.

At the top of the list, a 125-gallon grand prize reef aquarium with all the trimmings awaits, along with a beautiful cube system fully loaded with the latest technology. CORAL Magazine is contributing two one-year subscriptions to go along with the two tanks up for grabs this year.

If you’re ready to dive in, head on over to the 2015 Dream Tank Giveaway website to learn more, or even go straight to the St. Jude Fundraising Page to make your contribution – $10 gets you in!

Felix and Katiria Bordon when Bordon was honored as volunteer of the month at Florida St. Jude Children’s Research Hospital.

A Cause Which Stands Apart

In a world where everyone wants your charitable support for an endless array of causes, St. Jude stands out. We suspect most of our readers are familiar in some way with the research, service and support that St. Jude Children’s Research Hospital provides to children with cancer and their families. Some of you are probably already supporters (some years back I personally shaved my entire head [hair, beard, mustache], all to raise a couple hundred dollars for an effort benefiting St. Jude). St. Jude’s efforts are funded to the order of 75% of the overall operating budget, through public contributions, and Felix Bordon’s efforts over the past couple years recently earned him Volunteer of the Month honors from the Florida branch of St. Jude.

When I asked Bordon for more background on why he had organized the Dream Tank Giveaway, I expected to hear a relatively routine story about St. Jude being a great organization, and just trying to do the right thing and to do something to give back. Instead, I learned that this effort is much more personal, and the experience sparked a passion for fundraising where success leads Bordon to set ever-larger goals.

“We have an 8-year-old son, Brandon, and a 4-year-old daughter, Isabella,” started Bordon. “When Brandon was 4 years old, we found some bumps on his head and took him to the doctor to get them checked out. He was immediately diagnosed with Histiocytosis X by his pediatrician, and referred to an oncologist, who later confirmed the diagnosis. This was the beginning of the rest of my life. We spent several months in and out of hospitals doing all kinds of tests on him: blood work, MRI’s, bone density scans, etc. I don’t even want to remember the other parents’ faces in all the waiting rooms. I could try and explain the look in their eyes, but I could never do them justice. Sure, I’ve seen people like that before, and when you see them you simply feel sorry for them, but being one of them, in their shoes, is a different story. It’s like a private club you don’t want to be in.”

Bordon watched as the routine family and work life most readers take for granted became replaced with what amounted to days spent with doctors, at the zoo, or at church. Bordon’s business, Reef Savvy, was almost an afterthought. He remembers refusing to take new orders, offering explanations and refunds to customers and vendors. Only Bordon and a handful of our readers can truly understand what this time must have been like.

“Many months into testing, Brandon had been scheduled for a biopsy with a pediatric surgeon,” recalled Bordon. “That same morning his bumps disappeared, the the pediatric surgeon couldn’t find one to do the biopsy on. He told us Brandon had already been through too much and to cut him would be unnecessary. We went back to all the doctors who had previously diagnosed him, and none of them could explain why the bumps were gone. The new blood work also cleared him. This was the day my life changed. Could 3 or 4 doctors, blood work, and scans all have been wrong? Was it a misdiagnosis, a miracle? I know it sounds like a sappy movie, but this happened, we lived it. Every time I see Brandon I see my little miracle.” 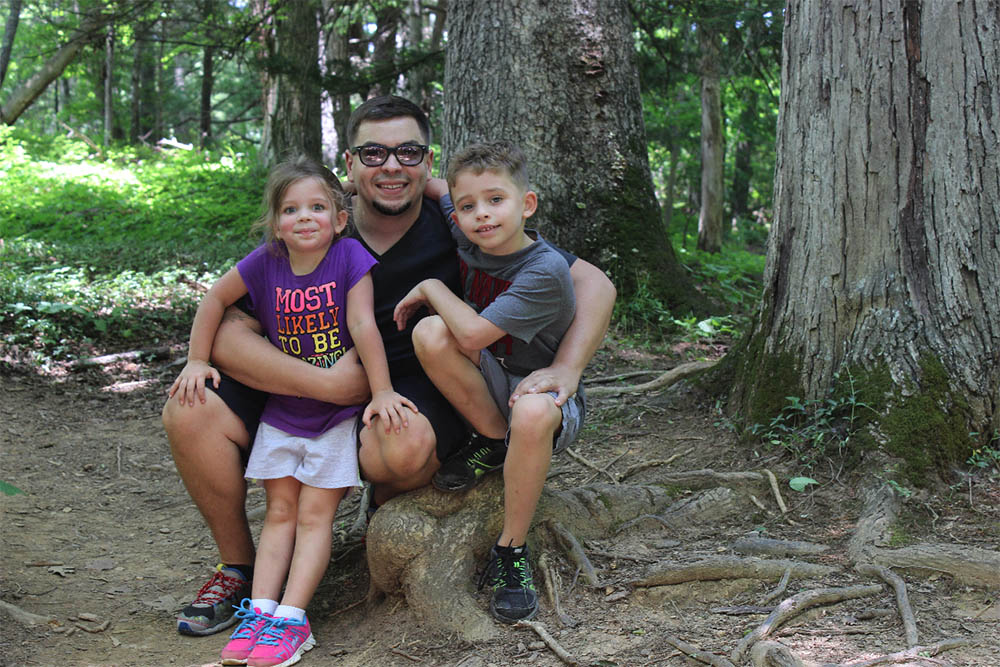 (left to right) Isabella Bordon, Felix Bordon, and Brandon Bordon, after their harrowing ordeal had passed, photographed in the Smoky Mountains, Summer, 2014. Image by Katiria Bordon.

Once Bordon’s family made it through this ordeal, something changed for Bordon. “Up until that time, I only knew of St. Jude from TV commercials and ads, and I had donated to them in that past on occasion. The first time I heard of one of their walks was probably in 2012, so I signed up for it and I ended up raising $1,000, and I couldn’t believe it! I did pretty well, considering the average person only raised $150. The following year, MACNA 2013 was set in my hometown. I had 6 booths and a huge presence, so we used that to our advantage. We built a small, 45-gal. tank and stand, and received a few items from some of the other MACNA vendors. In just 3 days we raised $3,000 at the show. We decided to do another 45-gal. tank and offer shipping anywhere in the contiguous US, so we opened the raffle up to the entire country. This worked well, as we ended up raising $15,000+. We wound up being the top fundraiser in Florida because of this event.”

Bordon’s success as a fundraiser only fueled the fire to do more. “In 2014 we set a $20,000 goal and donated a 90-gallon with all the bells and whistles. This time I was prepared: I did my homework and contacted many vendors, all of whom happily participated. The fundraising result was over $38,000 in donations! We were number 1 in FL and number 2 nationwide. We only lost the first place slot to Eric Trump and Elvis Duran from The Morning Show in NY. They had a very strong team called Elvis Trumps Cancer, and it was constantly on the radio and supported by celebrities.”

For anyone who ever wonders “who really wins these things?”, well, last year’s winner was Marty Schuum. “He’s a great guy and actually flew to MACNA in DC just to meet and thank all the vendors who participated last year in person,” said Bordon.

A huge list of tank components from dozens of vendors…and this is only the “grand prize” tank!

The Largest Dream Tank Giveaway Yet

Bordon once again set a $20,000 goal for 2015’s fundraising effort, but that’s just the starting point. “This year we really tried to do something special and over-the-top, and donated a 125-gal. tank and a 60-gal. tank plus tons of other items from 25+ vendors. The prize keeps growing and the total value is probably over $25,000 at this point.” He also noted that, even with a much larger prize offering this year, beating last year’s fundraising total ($38,000+) might be challenging, noting that St. Jude “changed the event from November to September, so we lost 2 months of fundraising.”

While I’ve focused much of this story on Felix Bordon’s efforts and motivation, the reality is that Bordon is quick to acknowledge that this is a fundraising effort that has garnered industry-wide support, and wouldn’t be possible without that support. In a recent interview with Saltwater Smart’s Chris Aldrich, Bordon noted that “This is our community doing this, it’s not just me. It’s all the different manufacturers and vendors that I talked about. We’re totally blown away by how big the hearts are of all the reefers in our industry.”

One of the most surprising items noted in the 2015 Dream Tank Giveaway is a small and growing army of aquarium maintenance professionals who have all volunteered to freely install the aquarium if the winner is in their service area. Ben Johnson of Captive Aquatic Ecosystems in The Woodlands, Texas, was happy to explain why he volunteered his time and service should they be called upon. “Initially I found out about [the Dream Tank Giveaway] because I admire Felix’s work. Then when I saw how successful he was a year ago with this campaign, that let me know that he was the real deal as far as organizing something like this. It’s a great cause that involves great companies. Why would I not want to be a part of that?”

A Call To Action

Terence Fugazzi, VP of Sales & Marketing for Neptune Systems, one of several large contributors to the 2015 Dream Tank Giveaway, joined Felix Bordon at the end of Aldrich’s interview, offering another point of view and a call to action to all reef aquarium community and industry members:

Fugazzi: “This is an important cause. I mean what could be a better cause than helping children?”

Bordon: “I can’t think of a better one.”

Fugazzi: “I’m so behind you with this.”

Bordon: “There are a lot of causes in our industry that I know are for our industry and I’m with that, too, but…”

Fugazzi: “If you’re out there, you buy the tickets, and if you’re in the industry, you donate something to this tank, OK? It’s one of the most important things you can do this year. Help the kids, help people with cancer. Let’s get it done.”

Bordon: “And we’re gonna do it, with your help.”

So Here Is How You Help!

As of late Thursday night, 9/17/2015, $36,763 had been raised already! Reef Savvy will pull the lucky tickets the evening before the walk, on Friday, September 25, 2015, so be sure you’ve made your donations beforehand. The deadline for donations to be eligible for the giveaway is Friday, September 25th, 2015, at 2 pm EST.