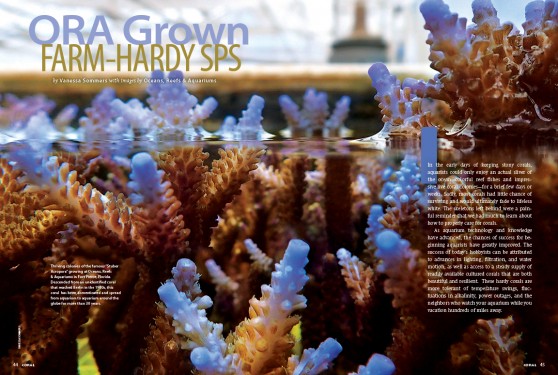 I was reading this month’s issue on the airplane ride back from MACNA and DC. Awesome content. The stuff on SPS was really well done for people that are not the experts we sometimes forget are only a small percentage of the reefkeeping population.

That was the good part.

Then on page 44 I got a 12-page advertisement for ORA. I kept turning pages hoping to see info from other outfits with other corals. Nope, just one page after another of pics and descriptions of corals labelled “ORA XXXX YYY”. What’s worse is that not a one of them even had the actual scientific names associated with them—just the usual “Orange Digital” or worse yet “ORA Plum Crazy.” I thought this was the very thing all you high-fallutin’ MACNA-inner-circle-guys… always like to make fun of?  Very strange indeed.

BTW, I did not write the above paragraph entirely from my own perspective but rather tried to capture the perspective of what I might imagine some in your readership.  The ORA article was purely a puff piece for them with lots of eye candy and a catalog of their corals from which to place an order.

If you care about the aquaculture side of things, there are many in the industry doing it and I put forward that the article could have done just that, featured three to five of them. Instead this is piece written not by a non-biased member of the Coral writing team, but rather by the company themselves.  It was written with no effort to discuss aquaculture in the broader sense or include others doing the same. It was completely biased and we will have to leave it there and must agree to disagree.

I will continue to present this issue of CORAL to my colleagues in the industry and ask for their opinion just to see how far off base I really am.

If we are really concerned about aquaculture and its survivability, next month can we get 6-8 pages of “story” on the corals offered by ReefGen or Unique Corals, I am sure they could use the publicity far more than ORA.

Sorry if I sound pissy, but you guys are better than this.

EDITOR
First, we should make it clear that ORA is blameless in this.  CORAL invited ORA and Vanessa Sommers to contribute this article, on the assumption that the majority of readers would find it useful and might discover aquacultured corals that they had not been previously aware of. It was my decision to issue the invitation to ORA and to publish the piece.

CORAL routinely asks other livestock suppliers to provide images and descriptions of interesting fishes, corals and other invertebrates, and these are typically found in the RARITIES Department. Among the others who have shared information on the marine livestock they offer are Quality Marine, Unique Corals, A&M Aquatics, Pacific Aqua Farms, Sun Pet, Segrest Farms, Sea & Reef Aquaculture and our door is always open to others.

Comments from other readers are invited and will help us in future decision-making by CORAL’s editors.