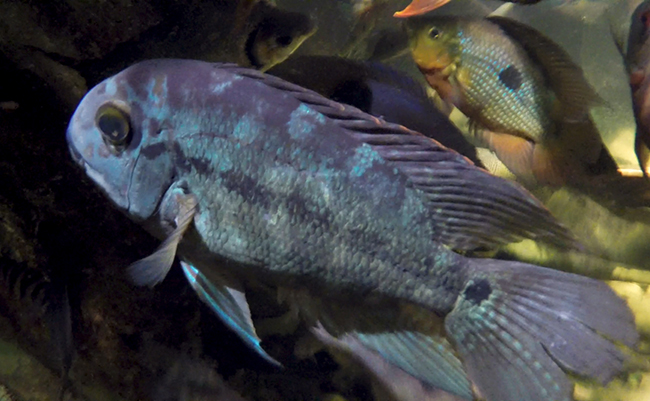 Adult Parrot Cichlid (H. psittacum) on display at New England Aquarium. Juveniles bred on exhibit were recently returned to Aquarium of the Americas in New Orleans, 10 years after their stock was wiped out by Hurricane Katrina

Recently, as the US marked the tenth anniversary of the devastation and tragedy wrought by Hurricane Katrina, the Aquarium of the Americas in New Orleans received a group of rare former residents. The fish—a group of Hoplarchus psittacum, or “true” parrot cichlids—which once graced the Amazon exhibit at Aquarium of the Americas, are direct descendants of fish bred there decades earlier.

This aquatic homecoming was brought about by a collaboration with the New England Aquarium in Boston, which has successfully bred generations of these beautiful and sought-after cichlids in their own flooded forest exhibit. The true parrot cichlid is a large but relatively peaceful inhabitant of blackwater rivers in the Amazon basin, where it can be found living sympatrically with discus, severum, Uaru, and eartheaters. The fish gets its common name from the local Portuguese moniker, “acara papagaio”, due to the vibrant green hues and deep red eyes of adults. Although not common throughout its range, the fish is somewhat abundant in the middle Rio Negro. 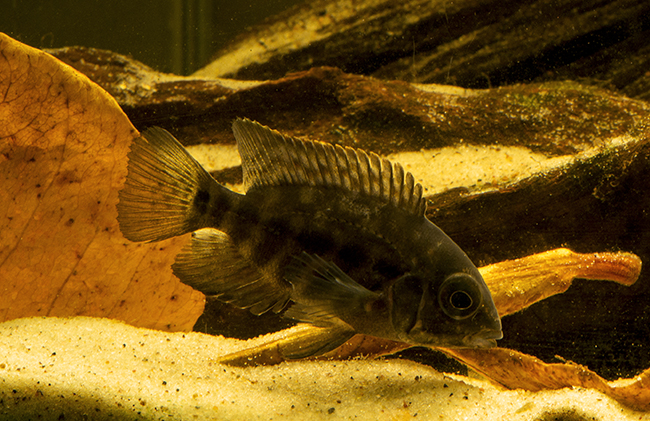 Juvenile H. psittacum in a home aquarium. The “true” parrot cichlid remains quite rare in public and private collections

“I’m guessing it was about 20 years ago when Ian Hiler from Aquarium of the Americas sent us a dozen or so Rio Negro parrot cichlids. This is a species that I had seen frequently in the wild but until recently, were not legally allowed for export from Brazil, making them very rare in captivity in the US. This species has done quite well at NEAq and can almost always be seen tending fry in out flooded forest exhibit.”

Aquarium of the Americas, although not damaged in the initial bout of winds and flooding from Katrina in 2005, lost power in the storm’s aftermath. The backup generators, not capable of powering the entire facility indefinitely, eventually failed after days without power. With aquarists and staff forced to evacuate, the aquarium sadly lost many of the fish and other aquatic life on display—including all of their H. psittacum. It was nearly 9 months before the facility was reopened to the public, and the facility has since undergone major renovations. 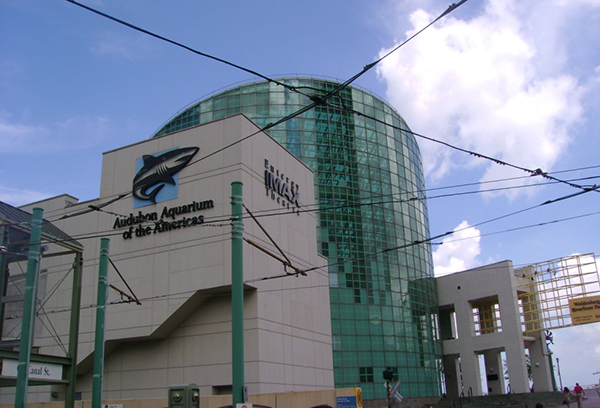 Exterior of Aquarium of the Americas in the aftermath of Katrina. Although not damaged in the storm itself, catastrophic power failures were responsible for the loss of many fish on display at the time

Dowd and Andrew Murphy, another aquarist at New England, drove the fish from Boston to New Orleans to personally make the transfer, and on site to receive the fish and acclimate them into quarantine was Ian Hiler, who had originally sent some H. psittacum fry to New England decades earlier. The transfer went smoothly and the parrot cichlids, along with some Caquetaia spectabilis (another uncommon Amazonian cichlid) are thriving in their holding tanks. After a quarantine period they will be introduced to Aquarium of the Americas’ Amazon display, where they will greet over one million visitors annually. Ideally, New Orleans’ newest cichlid residents will soon begin spawning and producing fry, just as their recent ancestors had done in the same exhibit years ago. 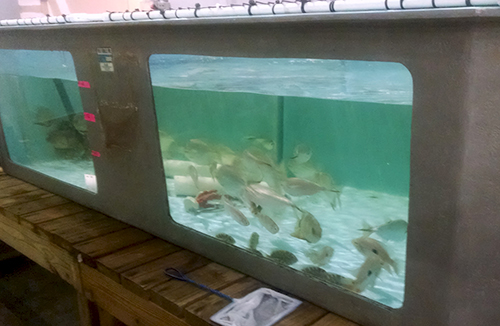 Recently acclimated fish, including H. psittacum and C. spectabilis, settle in to quarantine at Aquarium of the Americas

This transfer of fish is a prime example of the importance of cooperation between AZA institutions—ensuring not only that established bloodlines are preserved but also providing a bit of insurance against unforeseen and disastrous circumstances. It also provides a valuable reminder for home aquarists working with rare species to keep in mind: sometimes the best way to make sure a species remains in the hobby is a simple act of generosity.