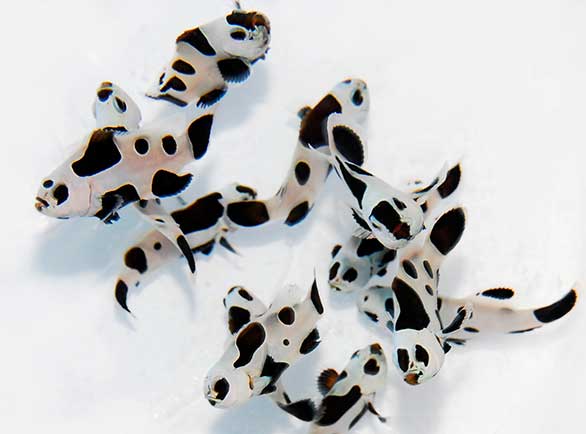 Batch of juvenile Sea & Reef clownfish, an as-yet-unnamed variant of Amphiprion ocellaris to be introduced at MACNA 2015 in Washington, DC. Image: Soren Hansen.

Attendees of the Marine Aquarium Conference of North America in Washington, DC, will get a chance to see the latest and most eye-catching new designer clownfish, which is about to become available to aquarists. 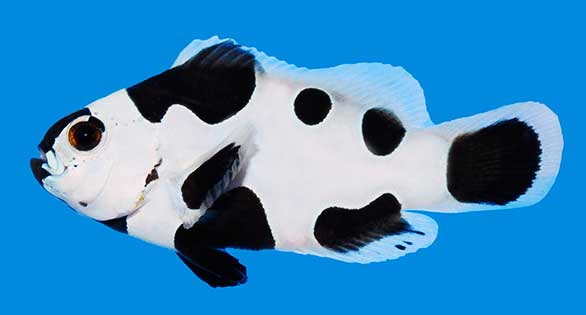 One of the new clowns, descended from Sea & Reef’s Mocha Vinci line.

“One of the MochaVinci offspring looked very different from the rest and it quickly became apparent that this was a one-in-a-million mutation. Instead of the golden coloration and swirly patterns of the MochaVincis, this single fish displayed an exaggerated white pattern that had more straight lines. Furthermore, this fish turned jet-black very early on. We initially called it the Black DaVinci Clownfish and believed we had just bypassed several generations of breeding more black into the MochaVinci line. 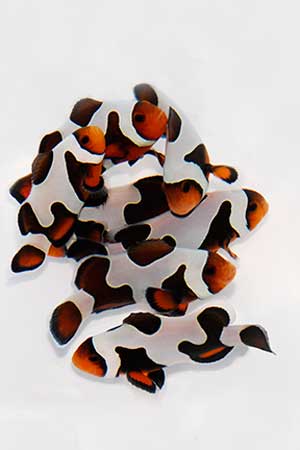 “The mutated MochaVinci Clownfish was paired up with a Black Ocellaris Clownfish with the goal of creating offspring with a pattern similar to that of its unusual parent. During the brutally cold Maine winter of 2015 the pair laid their first nest of eggs, and shortly after that we raised the offspring. It quickly became apparent that the offspring looked very different from the mutated MochaVinci Clownfish. The offspring displayed an even more exaggerated white body pattern, with an almost entirely full-white face mask.

“We would like to invite CORAL Magazine readers to help us find a name for this new and unique strain of clownfish. Please be on the lookout for our Facebook naming contest in early September (www.facebook.com/Seaandreef) or send your suggestions to sales@seaandreef.com. Sea & Reef Aquaculture will display this new strain of designer clownfish in September at MACNA 2015 in Washington, DC. Stop by booth #513 to see this fish for yourself. Once it is named, it will be released for sale in the late fall of 2015.”
—Soren Hansen, Sea & Reef Aquaculture