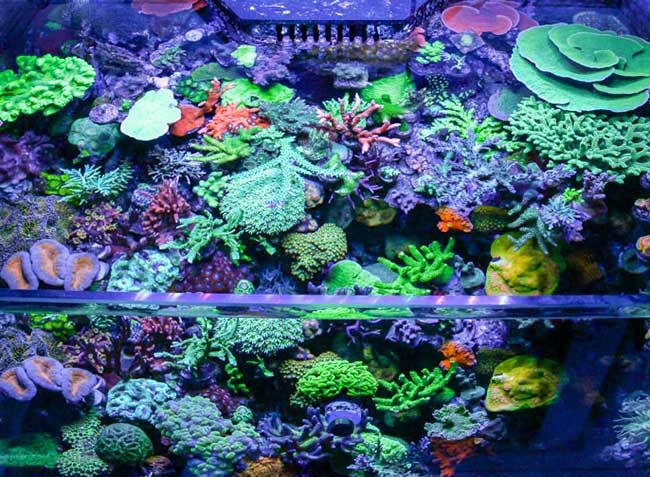 By Hernan Chaves with Jeffrey Jenney

To trace the history of my reef aquarium I need to look back to my boyhood days in Colombia, when I chased wild guppies in local ponds near my home. I now live in southern California and have multiple marine tanks, but my upbringing was humble, to say the least. My first memories of trying to sustain aquatic life consist of capturing little freshwater livebearers and attempting to keep them in my mother’s pots and pans. As you can imagine, this did not go well. When I got a little older I was able to purchase a small aquarium. This was an improvement, but still proved to be a disaster because I did not understand what aquatic organisms needed or the importance of keeping a stable ecosystem. Although frustrated, I had found a passion that has stayed with me over the decades. 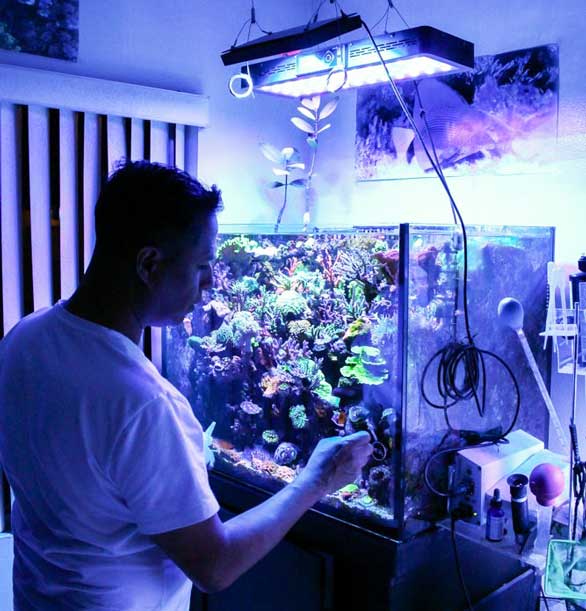 Hernan Chaves tending his intensively managed reef, a labor of love that repays its creator with exceptional coral growth and coloration.

In 1986 I moved to America and settled in Orange County, California. It wasn’t until I got a job at TIS, local fish shop, that I was reintroduced to the aquarium hobby and to saltwater fishes. My education began while I was working at this store under the mentorship of Phil Lam. Phil taught me all about keeping saltwater fishes and corals. I became obsessed with being able to keep something I’d seen in nature in my own home. I wanted to see if the animals in a captive reef would interact the same way they did in the ocean, and I spent countless hours studying their behavior in my tank.

Like most, I started my reefkeeping journey on a very small scale. I got my first tank, a 2.5-gallon (9.5-L) pico aquarium, in 2010. I had started a career as a medical translator, and did not take me long to outgrow the pico tank.I soon upgraded to a 25-gallon (95-L) tank, then to a 55-gallon (208-L) system. I set up my current 75-gallon (284-L) display tank in April 2013 and allowed it to condition for 90 days before introducing any fishes, invertebrates, or corals. This conditioning period gives the macro- and microfauna, as well as the bacteria, time to flourish without any interference. Allowing these organisms to prosper also assists with nutrient control. 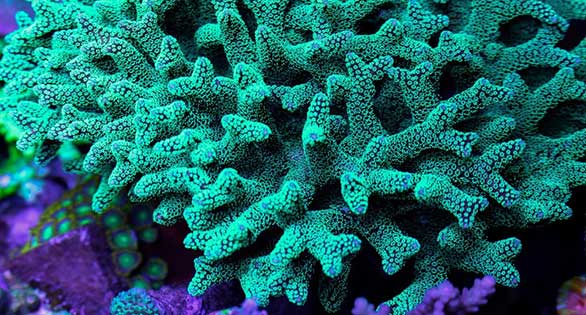 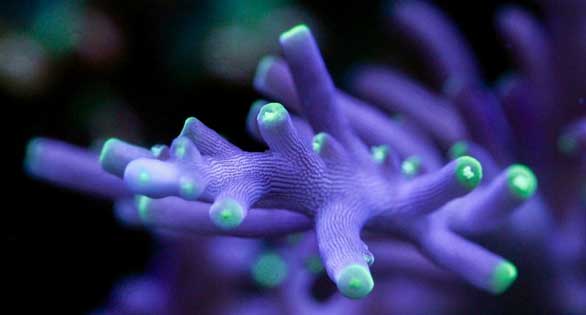 I run a low-nutrient system in my tanks—I over-filter and under-feed. The easiest way to under-feed is to have very few fishes. The heart of my system is an oversized skimmer that is cleaned regularly. I religiously perform water changes at the same time every week, always using the same salt brand. I use 0 TDS water for topping off and water changes. I employ a six-stage RO/DI unit to ensure that the water is free of contaminants before it goes into the tank. I run a makeshift refugium in my sump with Miracle Mud® and macroalgae, lit by a simple Home Depot grow light. This refugium helps to control nutrients and provides a place for microfauna to reproduce and feed the tank. A biopellet reactor help to further lower the nutrients. Two more reactors, one with Seachem Phosguard™ and the other with carbon, give an extra polish to the water. 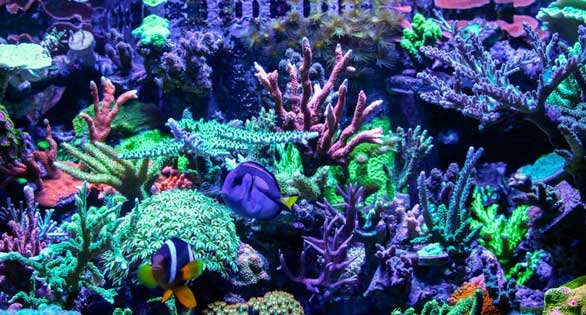 A very light fish load contributes to making this a low-nutrient system.

One of the keys to a successful tank is patience. I am a believer in letting nature take its course. In this hobby, the more you rush the more likely you will be to make disastrous mistakes. Another key to success is keeping the water parameters stable and testing them on a regular basis. There are no magic numbers that guarantee success; there are general guidelines, but every tank is different. Once I found the right balance in my own tank I wrote the numbers down and did my best to maintain them. 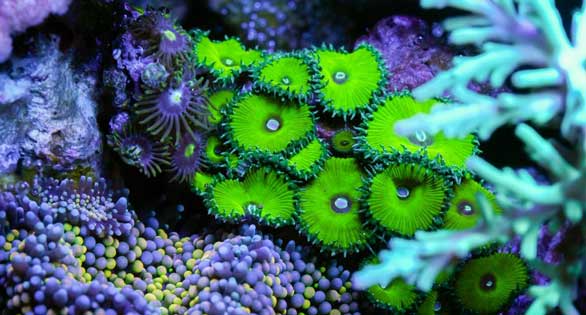 RIcordea, zooanthids and branching stony corals vie for space, as they do in nature.

There can be endless varieties of animals in our reef tanks, making it almost impossible for every animal to thrive at the same time. This does not mean you should overreact and make drastic changes. Remember to be patient and let nature take its course. Most of the time the corals or fishes will eventually adjust to your tank conditions, but if you make a rushed decision you might endanger the lives of all the inhabitants. 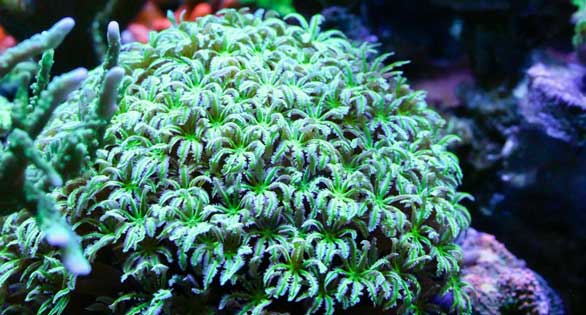 Swaying fronds of Clavularia add motion to the reef.

As my main tank became overgrown and my obsession for corals grew stronger, I added two tanks. One is a frag tank that holds a variety of corals as well as frags from my mother colonies. The other tank is dedicated to SPS corals, and there are many different Acropora and Montipora species growing in every available space. 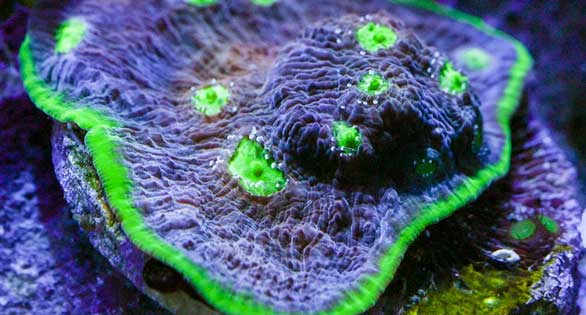 A growing chalice coral, started from a frag as are all colonies in Hernan’s aquarium.

My reef tank represents the culmination of more than two years of hard work and dedication. Every piece of coral in this tank was grown from a small frag, and seeing them develop into mature colonies has been a lot of fun. As this tank continues to grow more and more crowded, I can’t help but think about what my next tank will look like. 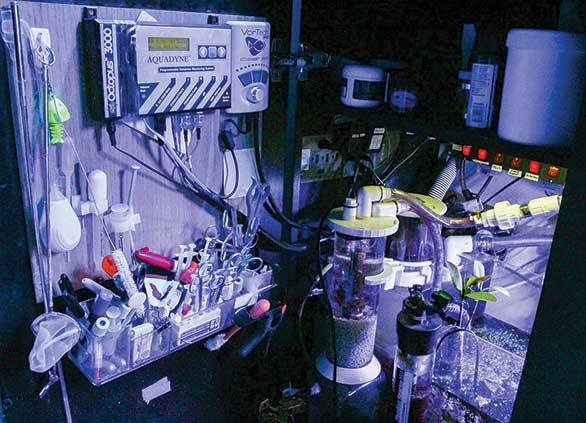 Under the hood: components mixed and matched by a hands-on experimental reefkeeper.

Lighting Summary
Photoperiod runs from 7 am to 9 pm with the LEDs slowly ramping up and down. I have tried to mimic the lighting on a reef in Papua New Guinea.
Fishes
Clarkii Clown, Amphiprion clarkii
Blue Tang, Paracanthurus hepatus
Golden Domino Damselfish, Dascyllus auripinnis
Corals
Over 200 different species of coral, too many to count.
Owner
Hernan Chaves
Anaheim, CA.