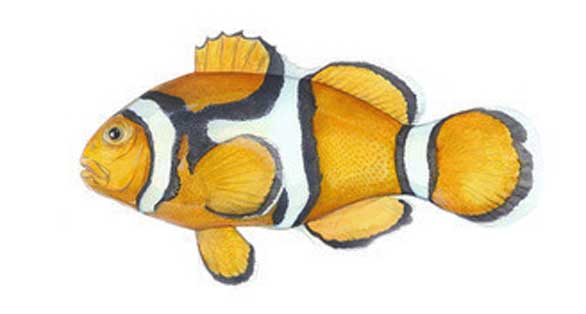 The Orange or Percula Clownfish (A. percula). [Illustration courtesy of Karen Talbot | www.KarenTalbotArt.com

by Ret Talbot, via The Good Catch Blog

The National Marine Fisheries Service announced today that they will not list the “orange clownfish” (Amphiprion percula), known in the aquarium trade as the Percula Clownfish, as threatened or endangered under the Endangered Species Act (ESA) at this time. Amphiprion percula, known to the general public as Nemo from the 2003 Disney/Pixar movie Finding Nemo, was petitioned for ESA listing by the Center for Biological Diversity (CBD). The petition was filed with NMFS in September 2012. In the official 12-month finding documented published in the Federal Register today, NMFS states:

Along with the Percula Clownfish, CBD petitioned NMFS to list these seven other damselfish species under the ESA:

NMFS Response to the Petition

In the course of the status review, NMFS looked specifically at 12 identified threats to the orange clownfish including destruction, modification or curtailment of the species’ habitat or range; over-utilization for commercial, recreational, scientific or educational purposes; disease and predation; inadequacy of existing regulatory mechanisms; and other natural or manmade factors affecting the species existence. When reporting on NMFS’s decision to undertake a status review for the orange clownfish, many popular media outlets focused almost exclusively on the affects of the marine aquarium trade on the species. Some claimed that overfishing and destructive fishing for the aquarium trade were threatening the species. A few outlets published data that was either out-of-date, misleading or flatly incorrect showing that the aquarium trade was potentially over-harvesting the species.

While the marine aquarium trade, and specifically marine aquarium fisheries in source countries throughout the orange clownfish’s range, are data-poor, NMFS determined the threat of collection for the aquarium trade “has a low likelihood of having a significant effect on the species’ risk of extinction now or in the foreseeable future.”

While NMFS found that “[c]lownfish, specifically A. ocellaris and A. percula, are among the top five most imported and exported species of marine aquarium fish in the aquarium trade,” NMFS points out that many of the imported species are actually aquacultured fishes. According to the data collected during the course of the status review, NMFS determined that 80 percent of A. percula imports to the United States originated in the Philippines and Indonesia. The status review points out, however, that “these countries are outside the geographic range of A. percula, indicating that 80 percent or more of the imported individuals were likely propagated in captivity and not collected from the wild, or misidentified.”

“If we extrapolate the U.S. import estimate [50-70 percent of aquarium reef fish in the global trade] to infer global wild harvest for the aquarium trade,” NMFS writes in the status review, “the number of globally traded wild A. percula in 2011 was likely closer to approximately 70,000-100,000 individuals, with as much as 80 percent potentially originating from aquaculture operations and not actually harvested from the wild (or misidentified if U.S. imports are considered representative of the global trade).” Based on their research, NMFS conservatively assumes 100,000 orange clownfish are harvested from the wild annually, saying this number is likely “a vast over-estimate.” Based on these estimates, fishing for the aquarium trade, according to the status review, probably represents far less than 0.0076 percent of the wild global population size of 13-18 million individual A. percula. As such, NMFS concludes:

Considering the estimated proportion of the population harvested annually, the principles of fisheries management and population growth, the ease and popularity of captive propagation of the species, and the apparent consumer preference for captively-reared fish for home aquaria, we have determined that overutilization due to collection for the aquarium trade has a low likelihood of contributing significantly to the extinction risk of the orange clownfish now or in the foreseeable future.

Stay tuned for further analysis here at The Good Catch Blog and at CORAL Magazine.