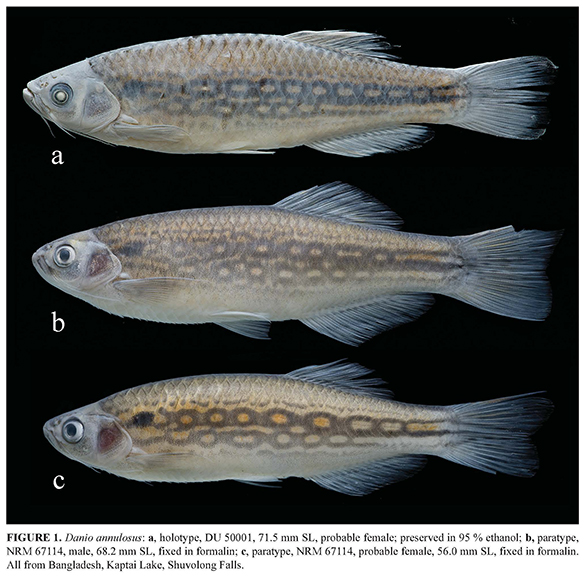 The Ringed Danio, Danio annulosus, from the paper in which it is described by Kullander et al. (Zootaxa, 2015)

As modern science scrambles to catalog the DNA of known species, most ichthyologists are predicting upheaval as hundreds and hundreds of aquarium fishes we know are re-evaluated and re-classified.

Entirely new species may also be the rewarding surprise, as Dr. Sven Kullander of the Swedish Museum of Natural History found when collecting wild danios in an effort to build a DNA barcode reference library of the genus Danio. Working with Mizanur Rahman of the University of Dhaka, and a team of Swedish and Bangladeshi researchers, Kullander found a handsome fish with unusual markings that fits no known genetic profile and has now described it as Danio annulosus. 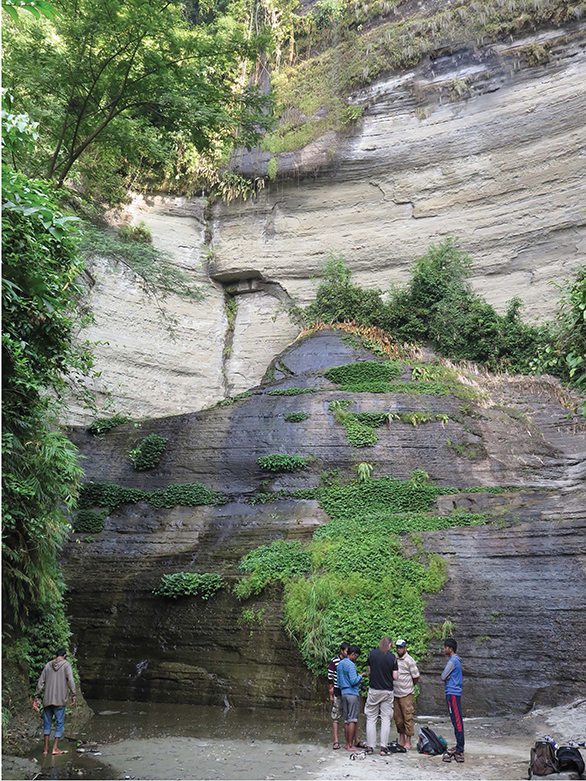 Scene of the discovery at the foot of Shuvolong Falls, a tourist attraction in Bangladesh accessible only by boat.

Discovered in a seasonal pool at the foot of a spectacular waterfall called Shuvolong Falls that is a known attraction for eco-tourists, the new Danio is related to a group known as the “Chain Danios”) (D. assamila, D. dangila, D. catenatus, D. concatenatus, and D. sysphigmatus) from the Indian subcontinent. (The genus name “Danio” can be traced to the Bangla word dhani, meaning “of the rice field.” [Wikipedia] ). According to Kullander et al:  “The southern Asian cyprinid fish genus Danio Hamilton comprises 24 valid species, most of which are native to
India, Bangladesh, and Myanmar, although some species are also found in Pakistan, Laos, Thailand, southern China, Cambodia, Viet Nam, Malaysia, and the Indonesian island of Sumatra (Fang Kullander, 2001; Kullander & Britz, 2015).” 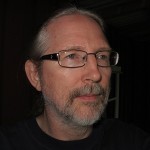 Danio annulosus is described in the paper Danio annulosus, a new species of chain Danio from the Shuvolong Falls in Bangladesh (Teleostei: Cyprinidae: Danioninae) published in the journal Zootaxa. (Free download link below.)

In their discussion of the discovery, the authors said:

“The Shuvolong Falls, type locality of D. annulosus, are spectacular and represent also a popular tourist target. The falls are a series of relatively concentrated free cascades flowing from a steep sandstone rock down to a small terrace about 90 m below. During the rainy season a large pool forms on the terrace, and water exits to the lake through a small stream. During the dry season only little water trickles down the hill. The terrace is then exposed with only at most knee deep water remaining in the shadowed, slightly deeper part, and the effluent stream all but disappears. It was not possible to ascend the hill from which the water flows to examine a possible stream feeding the waterfall, but it seems unlikely that the Danio originate from the waterfall. 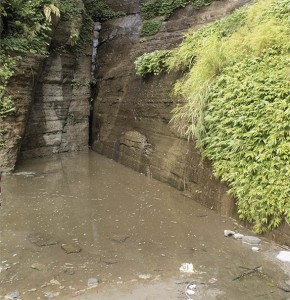 Seasonal pool where Danio annulosus was found at the foot of a 90m waterfall.

The pool at the bottom of the major fall may dry up completely in the extreme dry season, and we consider it unlikely that it harbours permanent populations of the two fish species collected there. It seems more likely that the Danio and Garra are attracted by the running water during the rainy season, and get captured in the pool as the lake level sinks, exposing the platform at the base of the hill. Most likely there was before the filling of the lake a longer stream from the fall which harboured a permanent population of D. annulosus and the syntopic Garra. There are two possible explanations for the replenishment of the habitat. Either there are small, still unexplored streams in the adjacent hills holding permanent populations which expand to reach the base of the falls during the wet season, or, more likely, a significant part of the populations survive in lake conditions close to the falls. Most of the hills in the Kaptai Lake region are still ichthyologically unexplored, and it seems reasonable to expect that both the Garra and D. annulosus have wider distributions….The continued discovery of new species of chain danios … suggests that we are far from a complete inventory of the species of this group.”

One aquarium trade observer, when seeing the images of the new Danio for the first time, said: “This is a very interesting looking fish that could find a place in aquariums if it could be collected and propagated commercially.”

Abstract
Danio annulosus, new species, is described from a small pool below the Shuvolong Falls in the Kaptai Lake system in Bangladesh. It shares with chain danios (D. assamila, D. dangila, D. catenatus, D. concatenatus, and D. sysphigmatus) a colour pattern consisting of series of dark rings with light interspaces along the side, complete lateral line, 14 circumpeduncular scales, a produced first ray in the pectoral fin, and a black humeral spot. It differs from other chain danios in possessing much shorter pectoral and pelvic fins, and a humeral spot that is slightly wider than deep instead of round or deeper than wide. The mitochondrial cytochrome c oxidase subunit I (COI) sequence separates D. annulosus from the most similar species, D. catenatus by a p-distance of 3.4%. Although recorded from only a single locality, Danio annulosus is expected to have a wider distribution in the Karnafuli River drainage.