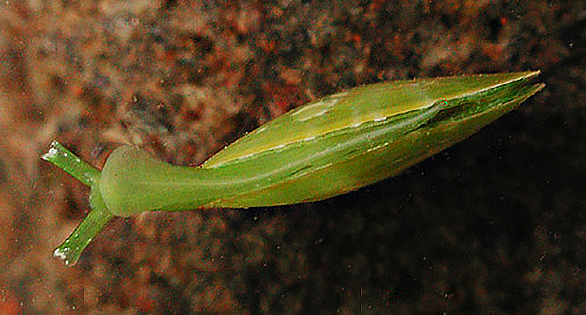 The time is in the early 1860’s, in the midst of the American Civil War, but no matter, science moves on. One of the early American pioneers of malacology, the study of mollusks, was Augustus Addison Gould, who was born in 1805 and graduated from Harvard College in 1825, receiving a Doctor of Medicine degree in 1830. He soon became a very highly-regarded physician and remained so until his death in 1866. 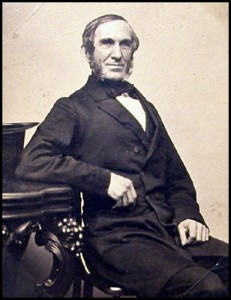 As with many other successful men of his period, he became active in science as an avocation, and soon had a worldwide reputation as an invertebrate zoologist and malacologist. During this period, famous malacologists and conchologists, or shell collectors, were often in demand to name new species, and some of them named a LOT of new species, well over 3,000 in many cases. Gould named quite a number, several hundred, I think. He received packages of shells from all over the world to name. It is important to realize that such “namers” of mollusks seldom had the whole animal to name. All they had were the shells. And for many of them, perhaps most, the rest of the animal was unimportant.

As odd as this may seem, the practice of naming mollusks from the shell alone continued well into the 20th century. I was working briefly at the Smithson Institution in the mid-1980’s doing some research and was told that one of the former curators there, a fellow whose death had occurred within the previous year, would go through specimens sent to the Smithsonian for addition to their collections as voucher specimens and discard all of the carefully preserved bodies that had accompanied the shells. I was flabbergasted. 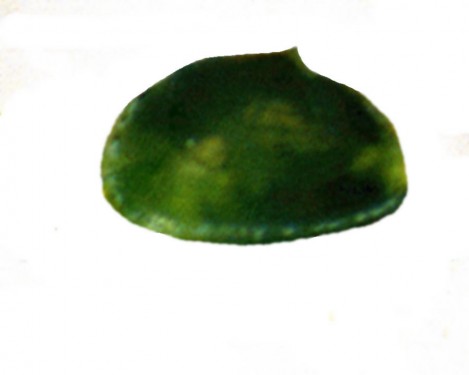 Shell of Berthelinia, a sacoglossan slug with shells, about 4 mm long.

Being a researcher working with mollusks, and being a person who has named a couple of species, I deposited the specific and highly important type specimens for newly named species at several important institutions, particularly the Smithsonian, which is also known as the United States National Museum. Fortunately, by the time I deposited my specimens, this obscene practice had been terminated.

However, when Augustus Addison Gould, M.D., received his package of shells from the Sandwich Islands, known now as the Hawaiian Islands, all he got was a package of shells. In 1862, he published descriptions of some of the species, one of which was a clam. It was unknown to science as far as he could determine, and from what is known now, he was correct in that supposition. Furthermore, the shells’ characteristics indicated that it was from an unknown genus as well as an unknown species. Consequently, when he taxonomically described the species, he also described the genus. He named the species as Julia exquisita, in a Latin species description in the eighth volume of the Memoirs of the Boston Society of Natural History published in 1862. As counted by my word processor program, the genus Julia was described in 38 words including abbreviations, and the species J. exquisita took all of 42 words. As a comparison, I have described two species, in English; the first one took 11 journal pages, while the second took 13 pages. I guess times have changed. Oh well…

Gould’s description of the genus Julia.

The species description of Julia exquisita.

Not having had a whole animal to examine, it is difficult to fault Gould for misidentifying his specimen of Julia as a clam. The shell is clam-like, and after Gould it was a full century before other folks corrected this misconception. In those heady days of short, almost one-line species descriptions, Gould’s mistake is one of the smaller ones, and one that was easily dealt with.

After Gould’s original description, many other species of Julia were described, all from shells with no mention of the soft parts of the living animal. Eventually, shells of this clam were found and enumerated as fossils. In some areas, the shells were fairly commonly collected in benthic grabs or in beach drift. However, no living Julia clams were ever found.

As it turned out, there was a very good reason that no clams with shells matching the description of Julia were ever collected. The reason is that Julia exquisita and all of its relatives having a similar shell are not clams; they are snails! This species and all of its relatives are unique among snails in having a bivalved shell that looks sufficiently like a clam, so much so that it fooled collectors and professional malacologists for about a century. Finally, around 1960, several researchers and shell collectors more-or-less simultaneously discovered living specimens. They weren’t found in collections of substrates for clams and other infauna, but rather in collections nearshore tropical green algae, particularly algae in the genus Caulerpa. There were several publications from all over the world around this time that made revisions of the species descriptions. The redescription of Julia exquisita from Hawaii, by Allison Kay, was in English and was about 336 words long.

Julia species and their relatives in the genus Berthelinia are bright green bivalved snails that are about half a centimeter in length and height. In effect, they are sacoglossan slugs that wear a bivalve shell. The various species seem to mostly eat Caulerpa, and they consume it in the typical sacoglossan manner, using their radular teeth to puncture the Caulerpa cell wall and sucking in the contents. The shells and body of the animals are bright green, matching the color of the Caulerpa quite well. 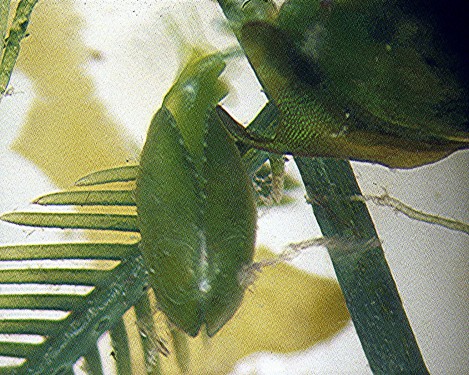 A specimen of Berthelinia showing the 2 shells, hinged in the middle. Dorsal view, about 5 mm long.

They hitchhike their way into reef aquaria by coming in on live rock that has Caulerpa on it, or in masses of Caulerpa. Their color is a close match for that of the alga, and the snails are quite cryptic. In a reef aquarium, they will survive well as long as they have some Caulerpa to consume. Otherwise, they are harmless animals; they don’t seem to eat other algae, nor do they harm any other animals. I know of no instances where they have reproduced in aquaria, but it is not terribly unlikely that they might do so. 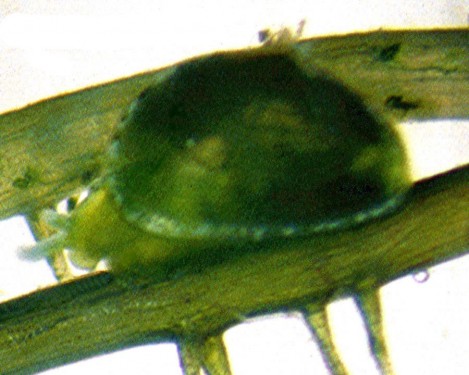 Berthelinia slug, side view, on a Caulerpa “branch.”