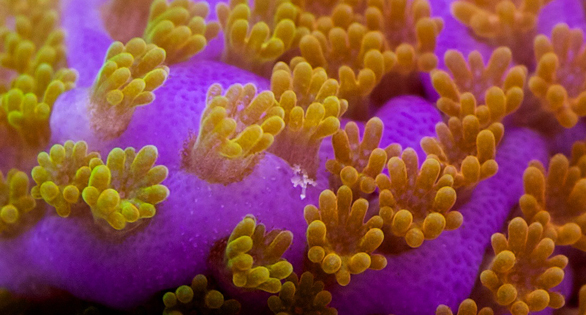 Purple Montipora. Image by Than Thein/www.tidalgardens.com

CORAL Magazine readers are invited to nominate other “Bulletproof” Corals to add to this list and help build a database that helps other aquarists choose species that increase their likelihood of success in reefkeeping.  Just use the Comment tool at the bottom of the page.

“Corals that have been captive-grown for several generations prove a lot hardier then wild pieces.”
Roy Seine

MONTIPORA
“My various aquacultured Montipora have been easier to keep than many soft corals that most in the hobby consider to be ridiculously easy to grow.”
Anonymous

“Sunset Montipora will survive the worse tank crashes, but digitatas not so much.”

“My Digi grows like a weed and has survived many tank swings.”
Daniel Murray

“i recommend starting with Montipora or Stylophora—Stylophora milka is a real survivor.”
Joakim Johansson

“I have a Birdsnest that grew from a 3/4″ frag to a huge colony in two years. The Montiporas also seem invulnerable…”
David Cohen

“Pocillopora by far my toughest coral. It self sows in the tank and will grow virtually anywhere…high light, low light, in and out of current. No problems with pests or tissue recession.”
Doug Carbine

“I have Pocillopora growing everywhere in my reef tank, on shells of live snails, even on my powerheads!”
Gene Boyer

Rainbow Pocillipora (ORA): I have left this coral on the floor for several hours and tossed it back into the tank in the sand bed and it was back and happy in an hour or two with full polyp extension. This coral also regularly spawns in captivity. This is the Kenya Tree Coral of the SPS world.
Seth Solomon