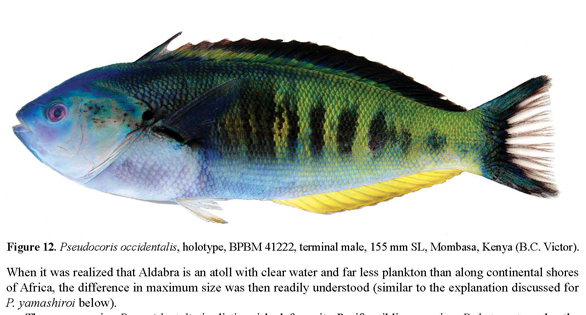 Holotype specimen of Pseudocoris occidentalis used for description of one of the new species.

“Some of the most stunning fish on the planet” is how reef fishes expert Scott Michael describes the family Labridae, and he goes on to say that the torpedo-shaped, athletic, zooplankton-feeding species are among the most eye-catching and beautiful.

Illustrating the point are two new species in the genus Pseudocoris, popularly tagged as Torpedo Wrasses, after Pseudocoris heteroptera, itself the nominal Torpedo Wrasse and perhaps the best-known of these species in the aquarium trade. Spread from Africa to Japan and the western Pacific Ocean, this genus has nine species, all of potential interest to sport divers, naturalists, and the marine aquarium trade. 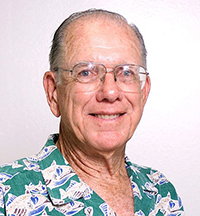 In a landmark new paper, Dr. John E. Randall, along with Allen Connell and Benjamin Victor, catalog the genus Pseudocoris and split two new species out as distinct, rather than geographic morphs of well-established torpedo wrasses. (Review of the labrid fishes of the Indo-Pacific Genus Pseudocoris, with a description of two new species. 2015, Journal of the Ocean Science Foundation, Volume 16.)

Closely related to the genus Coris, the torpedo wrasses long ago shifted away from hunting the bottom and hard substrates to pursue prey swimming the water column. According to Randall et al: “Pseudocoris is clearly an evolutionary offshoot of the genus Coris adapted to feed on zooplankton in the water column. The species of Coris are benthic feeders on hard-shelled invertebrates. They have strong canine teeth anteriorly in the jaws and large molariform pharyngeal teeth. In contrast, the species of Pseudocoris have much smaller anterior canines, have lost the canine posteriorly on the upper jaw, and the pharyngeal dentition lacks large molariform teeth. The mouth is smaller, and the snout shorter, so the eyes can converge on the small animals of the plankton. The eyes are nearer the center of the head so that predators can be seen below, as well as above.” 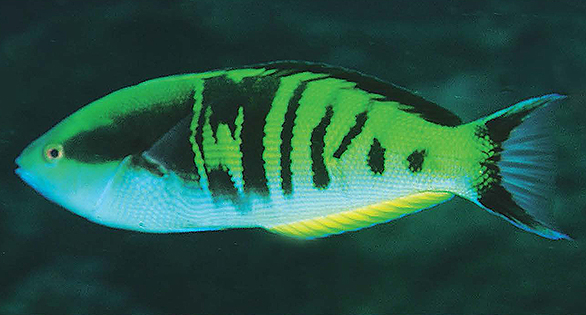 The first of the new wrasses is Pseudocoris occidentalis n. sp., found in the western Indian Ocean, off the eastern coast of Africa. Its more widespread sister species is P. heteroptera, found widely in the Pacific and eastern Indian Oceans. 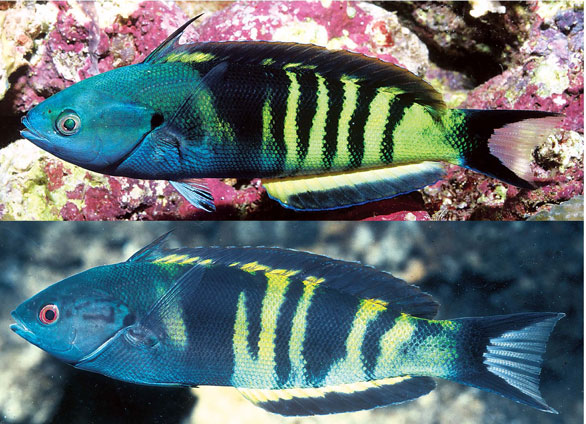 In their remarks on P. heteroptera, the authors write: “Previously considered a single pan-Indo-Pacific species, the western Indian Ocean population is described here (P. occidentalis) as a new species. The two sibling species differ slightly in the number of lateral-line scales (Table 1) and in the number of gill rakers, as well as in the coloration of juveniles and the terminal-phase male. There is, in addition, a 0.63% sequence difference in the mtDNA COI barcode gene (minimum interspecific difference by K2P & uncorrected pairwise).”

Pseudocoris hemichrysos n. sp. is reported to be found around islands in the western Indian Ocean, including the Maldives, Mascarenes, and Chagos. These is some considerable variation in the appearance of terminal males shown in the new paper, but the new species differs from its sibling species P. yamashiroi by having a bright yellow or golden orange area on the rear upper body and soft dorsal fin.

The paper goes on to show and describe the other members of the genus Pseudocoris, including many juvenile and intermediate phase forms, with a map illustrating their known distributions in the Indo-Pacific: 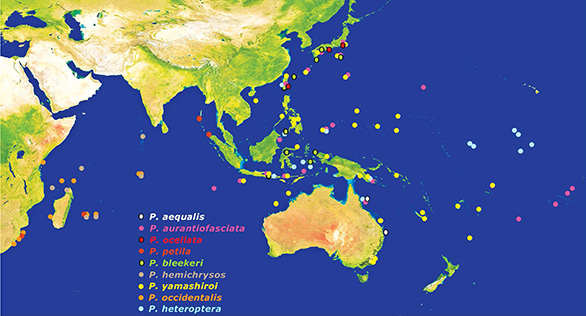 The paper is a treasure trove for all wrasse enthusiasts, and is freely available for download via the link below.

ABSTRACT
The Indo-Pacific labrid fish genus Pseudocoris Bleeker is represented by nine species: three pairs of sibling species that split between the Indian and Pacific Oceans and three endemic to various parts of the Pacific Ocean. Two of the species pairs include a new species for the Indian Ocean sibling. Pseudocoris heteroptera (Bleeker) is now considered limited to the Pacific Ocean, ranging from the Line Islands to Indonesia, north to Taiwan and southern Japan, and south to the Great Barrier Reef, while Pseudocoris occidentalis n. sp. is from the western Indian Ocean. The terminal male of both species have a large dark bar anteriorly on the body, followed by a series of irregular black bars; the Indian Ocean species differs by having shorter bars, a bright yellow anal fin in the terminal male, and the juveniles blue becoming yellow posteriorly. Pseudocoris yamashiroi (Schmidt) is now considered limited to the Pacific Ocean, wide-ranging from Japan, Taiwan, and the Marshall Islands, south to Samoa and New Caledonia, while Pseudocoris hemichrysos n. sp. is from the islands of the western Indian Ocean, including Maldives, Mascarenes, and Chagos; the terminal males of the new species differ by having a right yellow-orange area on the rear upper body and soft dorsal fin. The third sibling-species pair had already been split; comprising the Pacific Pseudocoris bleekeri (Hubrecht) from Indonesia north to Ryukyu Islands, the terminal male with a broad bright yellow bar on midside of body, flanked by numerous dark bars and ovals, and Pseudocoris petila Allen & Erdmann, named for its slender body. The latter was described from two initial-phase specimens from the Andaman Islands, and an underwater photograph of the terminal male from NW Sumatra (the range is extended southwest to the island of Réunion and South Africa based on underwater photographs of terminal males); the terminal male of P. petila differs by having two yellow bars on the midside of the body. The three endemic Pacific species comprise Pseudocoris aequalis Randall & Walsh from the Coral Sea and southern Queensland, the terminal male bright blue without elongate anterior dorsal spines; Pseudocoris aurantiofasciata Fourmanoir, wide-ranging in the Pacific (with records in the eastern Indian Ocean at Christmas and Cocos-Keeling Islands), the largest species (to 193 mm SL), with the greatest body depth (to 2.9 in SL), the adult male with a narrow white bar on the side and with two long caudal-fin filaments; and Pseudocoris ocellata Chen & Shao from Taiwan and Japan, the terminal male with a large, irregular, blue-edged black spot on midside. Sequences of the barcode mtDNA COI marker for all but one species of the genus (P. ocellata is unavailable) show the eight species to be distinct monophyletic lineages, with the sibling-species pairs from different oceans diverging 0.63% in P. heteroptera/P. occidentalis, 2.51% in P. yamashiroi/P. hemichrysos, and 1.08% in P. bleekeri/P. petila.

Review of the labrid fishes of the Indo-Pacific Genus Pseudocoris, with a description of two new species
Journal of the Ocean Science Foundation, Volume 16, pp 1-55, 2015.