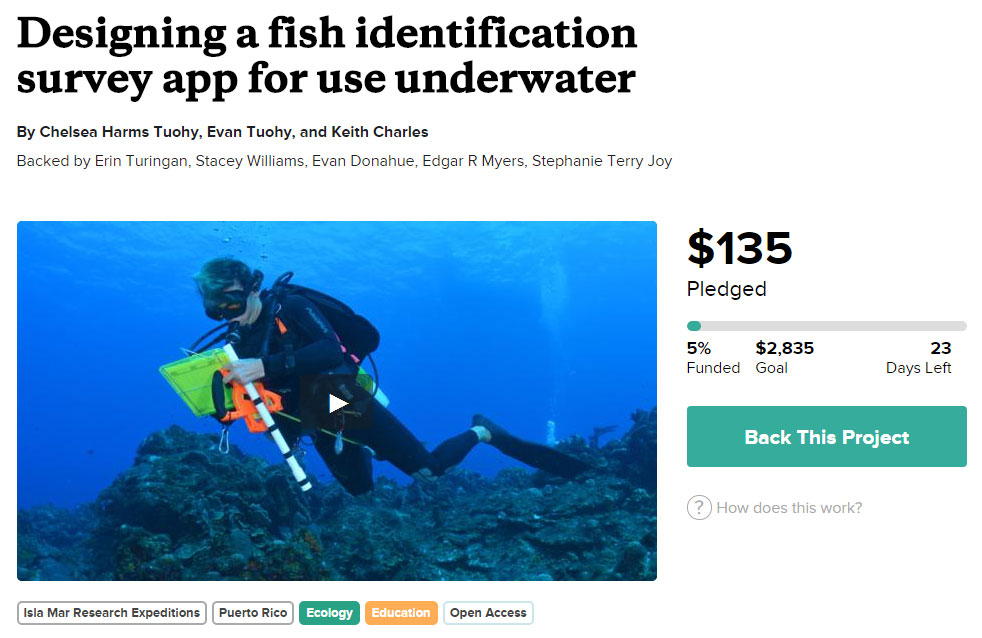 The app is currently in development by Keith Charles – a Chicago, IL based independent software designer.

The company founded by Chelsea and Evan Tuohy – Isla Mar Research Expeditions – is the face of the application. The company was established as a field course coordination and teaching institute for undergraduates and field researchers. After instructing new fish biologists in Caribbean reef fish identification, they realized there is a steep learning curve to this fish identification technique. They sought to find a more efficient and faster way to teach these new scientists how to identify fish underwater, and increase the reliability of the data they collect.

They are seeking the most cost effective solutions to make this technology available to all budgets. Students and citizen scientists are their inspiration; they are working on collaborations to identify budget-friendly alternatives to more expensive tablets and underwater housing.

Who will use the App?

The app is designed as a teaching tool to assist students, field researchers and citizen scientists. There are many volunteer-based organizations that rely on divers to census fish around the Caribbean and Western Atlantic. The quality of their data will be enhanced by this app, and inexperienced fish surveyors will quickly be familiarized with the fish and can learn the basics without the help of an expert. The company is also building a more robust version of the app which will be utilized by experienced fish biologists for field data collection.

Isla Mar Research Expeditions will use the app to train students and scientists in Puerto Rico. They will also visit other Southeast Atlantic, Gulf and Caribbean organizations and universities to train workshop leaders and field instructors on how to use this technology.

To learn more about the app and to support their effort, please contact