Algae Happen: They are everywhere, but there is no reason to panic 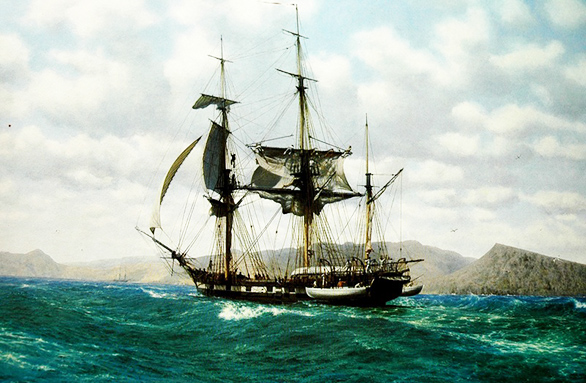 Darwin’s ship, HMS Beagle, where airborne algae cells were discovered forming a layer of dust at the top of the mast.

Remember that wonderful feeling you had when you put your new reef aquarium system together and got it powered up and running for the first time? After months of plotting, researching, and selling off the sailboat, you have brilliant cube of saltwater, swirling with the latest filtration and propeller pumps, glittering under the newest of LED lighting, a thing of beauty, just as you had hoped. At the moment, though, there are no corals in the tank, not even live rock, just some sand and Key Largo base rock. The substrates started out dry and you followed a friend’s advice to soak sand and rock in chlorine to be sure you were not importing any potential pests or problems into your new system. This trial run will make sure all the mechanical necessities are perfect.

If you are like most people who have just set up a new aquarium, the pristine tank—even without the first fish—fills your soul with unadulterated joy. you are exercising Zen patience and letting things run for a few days, and you can hardly wait to bring it to life. Then you realize it’s already alive! You see that first spot of green or brown, or possibly an attractive golden glow, edging out from the “sterile” base rock. What the hell is that? You haven’t added anything to the tank. Life has arrived on its own—but where did it come from?

What you have just seen is the damnable curse of reef aquarists—algae! The gauntlet has been thrown down. Waves of dizziness pass through your body, and you suffer from palpitations and faintness of breath. It dawns on you that the perpetual struggle between reef aquarists and their algal nemesis has begun: your beautiful tank is being sullied with filmy green scum.

Algae and the reef tank

This is an old story. The aquarist has created a miniature world ready for life; there are mineral nutrients in the water and intense reef lights provide the energy. Although the system appears sterile, it is not. With the addition of salt water, living organisms colonized the system. The first algal cells were probably present before the tank was completely filled.

Unlikely as it seems, the air surrounding us contains microscopic oceanic life, a fact first discovered in 1844 when Charles Darwin had some interesting dust he brought back on HMS Beagle examined. It turned out to contain the remains of a number of species aquatic diatoms that had drifted onto the ship and represented the first-known airborne algae. Over 350 types of living marine algae have now been collected from the atmosphere. Launched into the air by breaking waves, bursting foam bubbles, and tropical cyclones, these organisms travel everywhere on air currents. Live phytoplankton are found everywhere that samples have been taken—from a few millimeters above the soil in a forest 600 miles (1,000 km) from the nearest shoreline to 30 miles (50 km) above sea level. Air floating over metropolitan areas, rural farmlands, and deserts often has several hundred algal cells per cubic meter; the highest recorded density is over 3,000 cells per cubic meter. The major types of algae collected are diatoms, cyanobacteria, and green algae, but a great many other types are also present, ready to drop into a newly-prepared marine tank that also happens to be a perfect new algal habitat where they have the potential to explode in numbers.

A marine aquarium can be anything from a beautiful, living objet d’art to a functional mini-ecosystem. Wholly artificial and not connected to the ocean, a reef aquarium nonetheless contains all the components of an interactive ecosystem: a physical environment, biota, and pathways along which energy and material flow through the system. In our mind’s eye, a coral reef aquarium has a reef-like structure with corals and other animals on it and fish swimming around it. But algae? Not a snowball’s chance! Very few aquarists buy into the idea of algae in their systems. And therein lies the problem: a natural coral reef teems with algae, mostly unseen, and our reef aquarium analogues are so like the real thing that they literally cannot not have algae growing in them.

The two fundamental types of reef tank algae are red-slime and a single group containing all other algal types, such as diatoms, green algae, and dinoflagellates. Notwithstanding their structural and metabolic differences, these two algal types are fundamentally similar in one basic way: they use dissolved nutrients, water, and light to grow. And therein lies the problem.

When a reef aquarium is doing well, there is always an excess of various metabolic byproducts consisting of waste materials, such as nitrates, and dissolved organic materials, such as sugars and amino acids, as a result of the basic metabolisms of animals. All of these dissolved goodies serve as nutrients for one alga or another. The better the decorative livestock are treated, the more nutrients will be found in the system’s water. Although the tank’s biological filtration utilizes dissolved nutrients and helps control algae by removing some of their nutrients before the algae can use them, if the reef aquarium animals are well fed, there will always be dissolved nutrients present.

When in worry, when in doubt, run in circles, scream and shout!

At this point, many novices and some experienced aquarists panic. They tend to want to throw their tanks against the wall but instead usually start throwing things into the tank, chemical cure-alls or rescue squad creatures that all too often trigger a new set of problems. Fortunately, there really is no need to panic or overreact.

On a coral reef or in a coral reef aquarium, there is a lot of space without corals or other desirable organisms growing on it. Algae utilize that space, dissolved nutrients, and light to grow. When considering a discrete macroalgal individual, any discussion of reef tank algae involves multi-species assemblages. Although it is impossible to identify microalgae without microscopes, and often expensive and sophisticated microscopes at that, aquarists nevertheless tend to call such assemblages by the name of the perceived dominant alga or algal type, even if it includes some microalgae, such as diatoms or dinoflagellates. Even somewhat larger forms, like “hair algae,” cannot be identified without microscopy. Technically such assemblages are called “biofilms” if they are mostly two-dimensional, or “aufwuchs” if they are low-growing but definitely three-dimensional communities of algae, bacteria, archaea, cyanobacteria, protozoans, small animals, secreted animal tubes, fecal pellets, grunge, scuzz, and other assorted byproducts of living or once-living things.

Fortunately, the algal growth forms provide ways to functionally classify algae, not by species but by shape, size, and color. This allows aquarists to choose algal predators called “herbivores” that eat those various algae, and thus help control them.

Many animals found on coral reefs eat algae. As you construct your own reef, it makes good sense to evaluate which algae-eating animals will make good aquarium denizens. Not surprisingly, many herbivores are specialized to eat only one or a few types of algal prey. Of the many groups of marine herbivores that might be available for purchase, the aquarist should know which can or will eat which algae. Putting an herbivore in a reef tank with algae that it normally does not eat will do nothing more than kill the herbivore and deplete one’s funds. Based on my own experience, as well as the research I have done on invertebrate predators and their prey, I know that the animals offered for sale to aquarists are often inappropriately advertised.

Here are some general guidelines that may help you to purchase effective herbivores:

diversity of airborne algae in an urban atmosphere.  Ecography 29: 766772.