A Day with Aquarium Hobbyists in Delhi, India 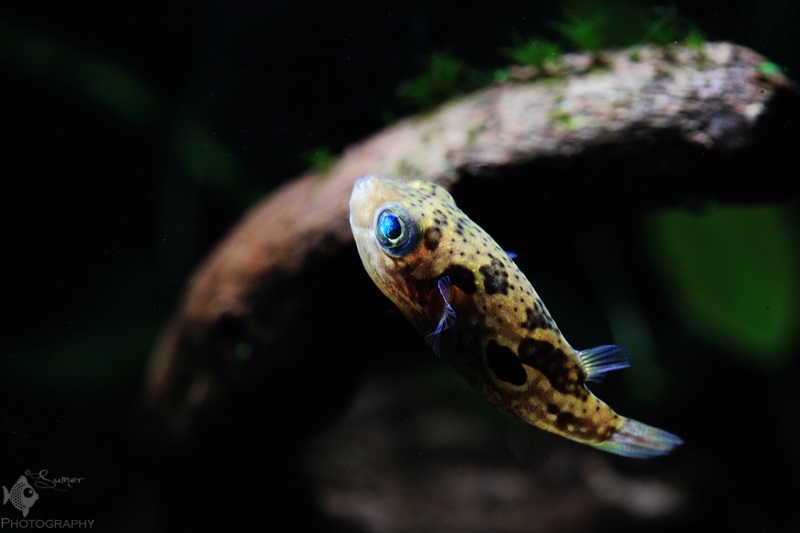 The ultimate goal of my journey was a collecting trip in the waters of southern India, but it first meant travelling to South Asia and landing in fourth largest city on earth. I was about to have almost 18 hours of layover time in Delhi (or maybe I planned that intentionally), so I contacted a few hobbyists friends there. I wanted to see their tanks, talk to them, and get to know how the hobby *works* in Delhi, the capital of India.

Vijendra Suryavanshi gladly invited me to his home to spend whatever remained of the night (my flight landed in Delhi at 2 AM). Of course, I could not sleep because of the jet-lag.
In the morning, I got to see his fish room. It was immaculate, and all the tanks had interesting fishes in them. From Chaca chaca to Danionella priapus, I was fascinated by every fish he had. I wasted no time taking countless photographs of Vijendra’s collection.

The first fish to catch my attention was Danionella priapus, a magnificent fish. It would be a great addition to planted tanks with relatively slower flow. 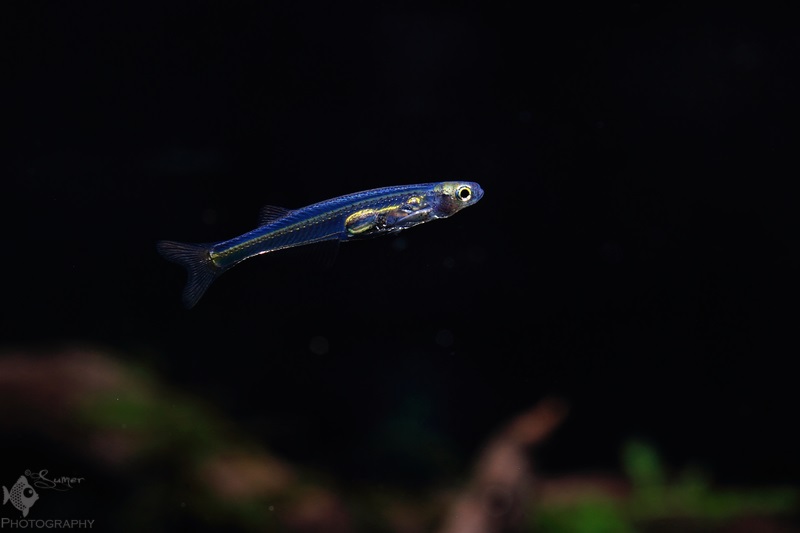 Danionella priapus, a very delicate and impressive fish. These definitely catch attention in a fish room. 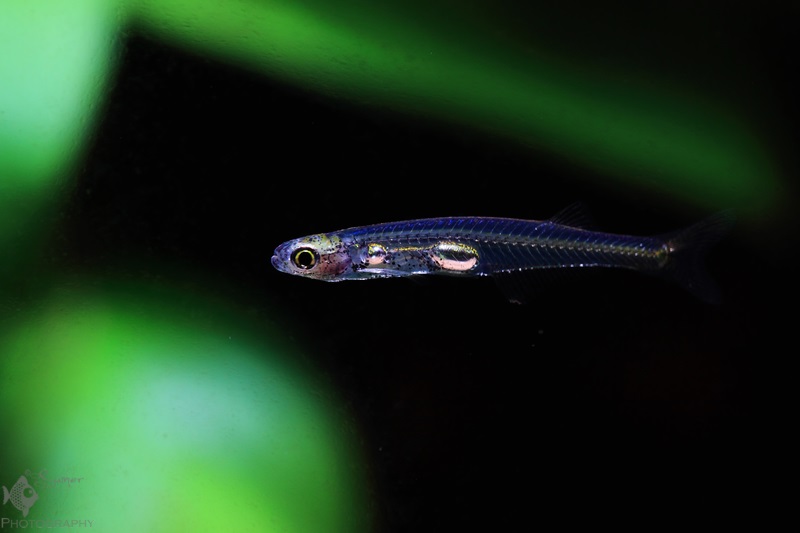 As you can see, most of their body  is transparent. They grow to a length of 1-2 inches. Vijendra told me that they are fairly easy to breed and are substrate spawners. 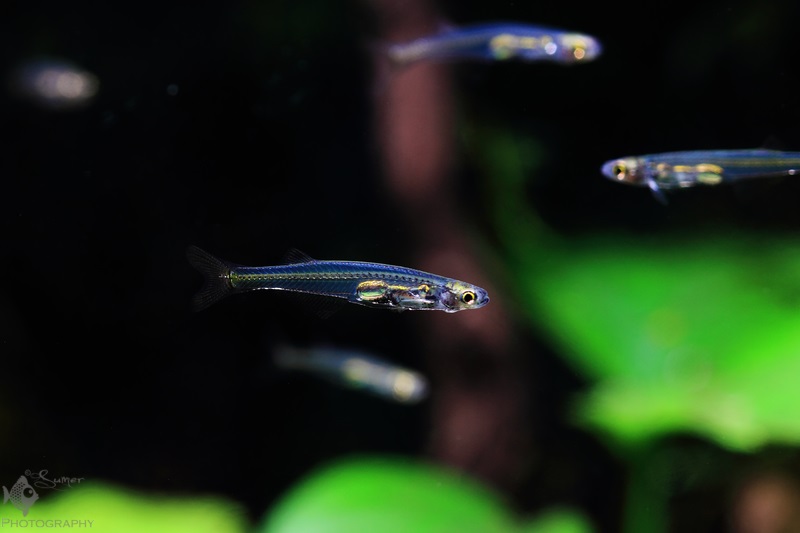 Vijendra told me a funny thing about these fish. He said, “I feed them some microworms, then some Tetra Bits (which are red in color), and then some microworms again. You can literally see three layers (white-red-white) in their stomachs.” 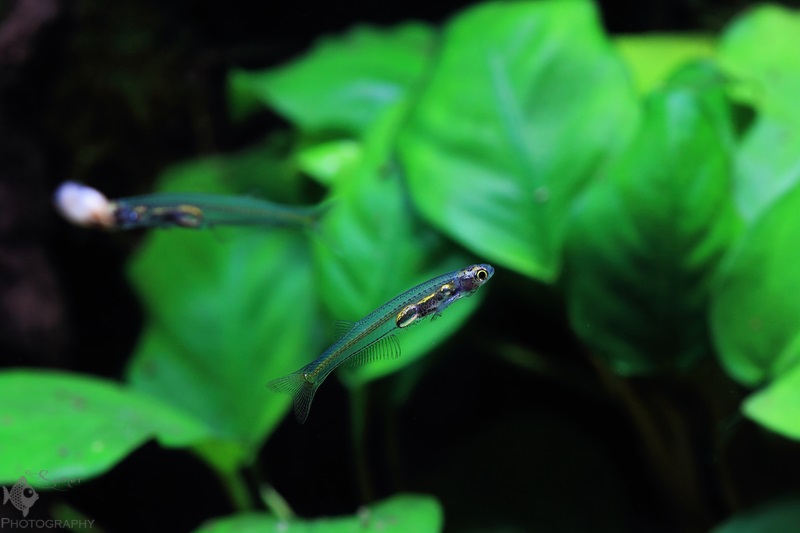 I have not seen Danionella priapus being offered in the United States yet, though I have seen their cousins, Danionella dracula and Danionella translucida. 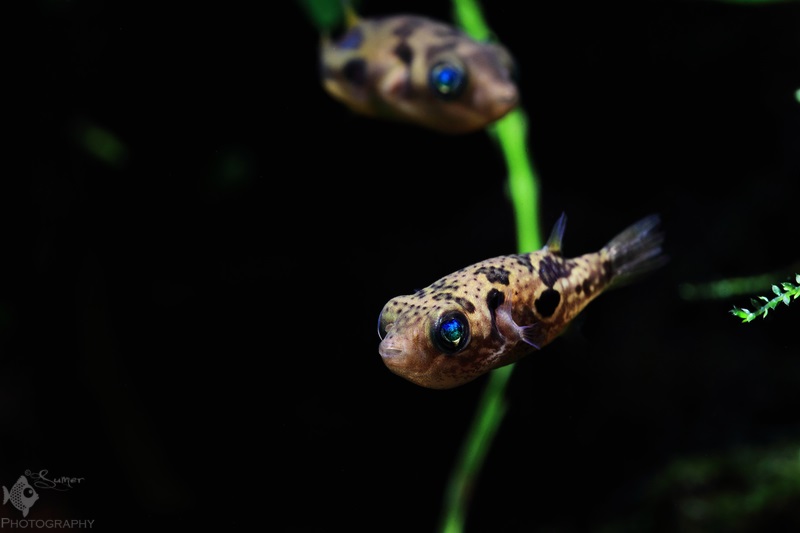 Carinotetraodon travancoricus, commonly called “pea puffer,” is also endemic to India. Later in the trip I videotaped this fish in its natural habitat. More on that later. 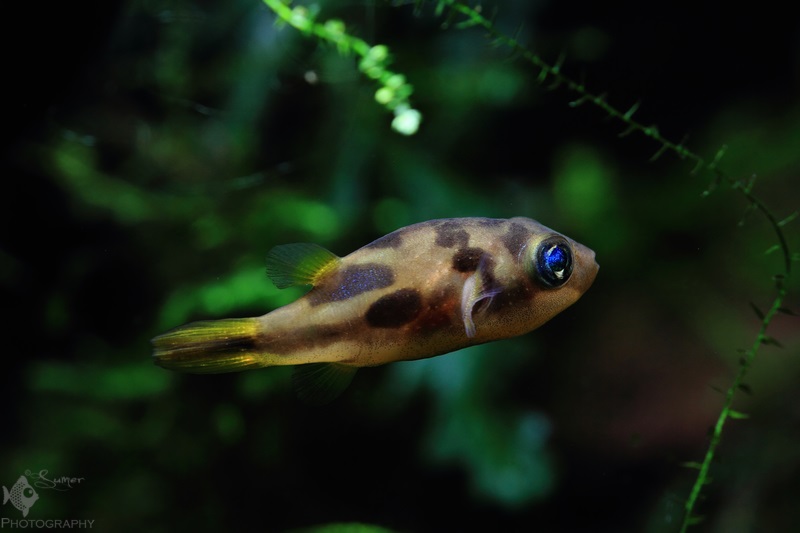 Carinotetraodon travancoricus can swim in very strong currents. Their small pectoral fins work almost like the wings of a bee, moving so fast that they can swim through very fast-flowing water. But that is not where they usually live. Usually they live in relatively slow-flowing water, which is the suggested setting to keep them at in captivity. 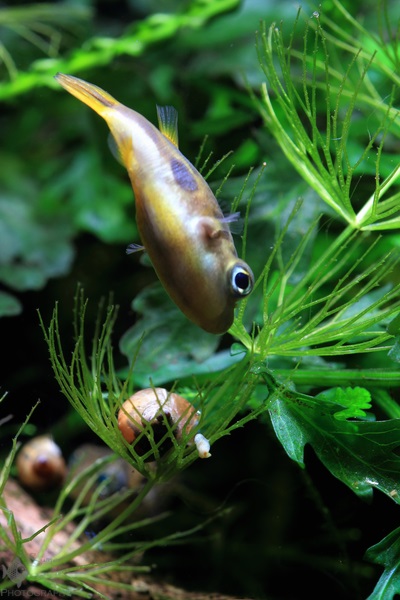 Carinotetraodon travancoricus love snails. They can eat a snail as big as themselves. Vijendra showed me this by dropping in a small pond snail that he cultures just to feed this fish. The snail was gone in a matter of minutes.

Vijendra also had Chaca chaca in his fish room. This is a predatory catfish which can grow up to 8 inches. It is born with an extraordinarily well-camouflaged body. There’s a very interesting fact related to this species: this fish is known to bring down the pH of the water column in a tank. Some say it is because of the acid that it produces to digest its food, and some say it is a defense mechanism, but the real reason is still not known. 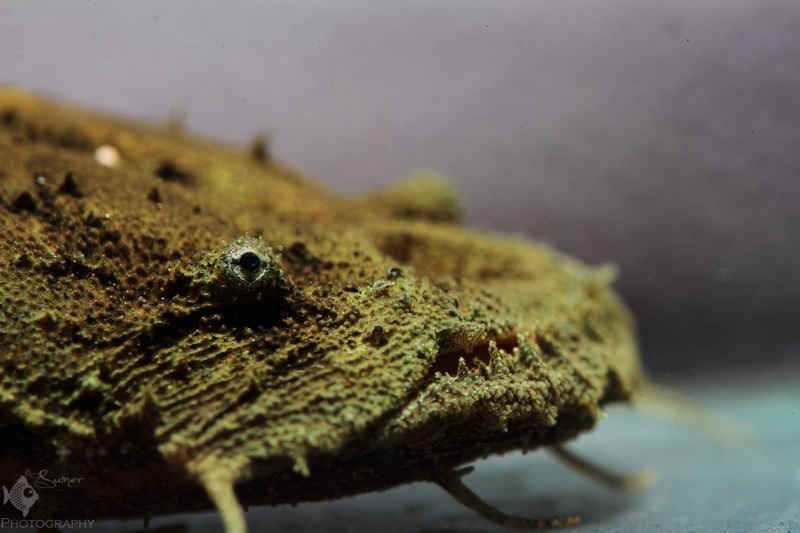 A close-up shot of this predatory catfish. They can eat anything that fits in their mouth. Vijendra also reported that he has seen pH dropping in the tank where he keeps this fish. 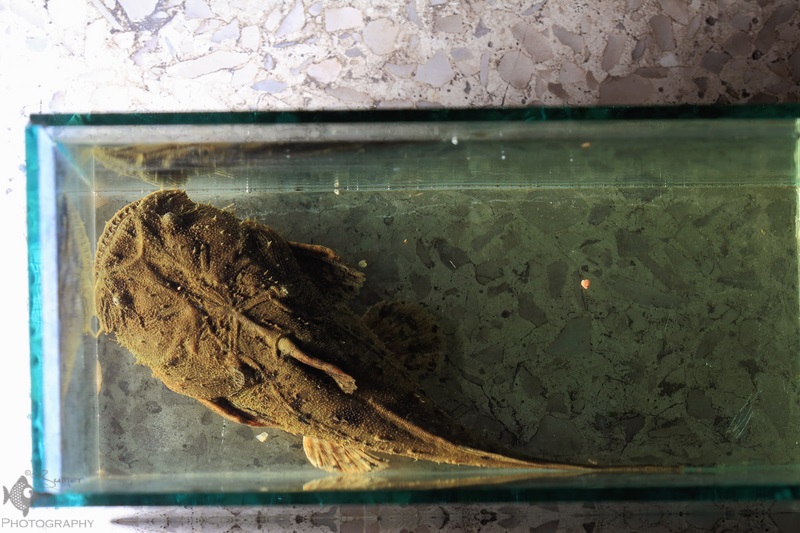 A body profile shot of Chaca chaca. It was around 5 inches in size. They grow to be up to 8-10 inches. 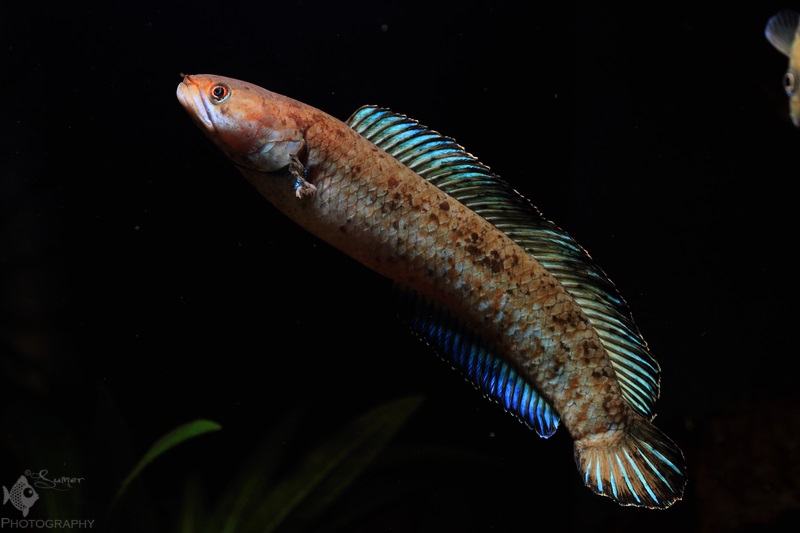 Channa andrao, a beautiful Channa species that is named in honour of Mr. Andrew Rao. 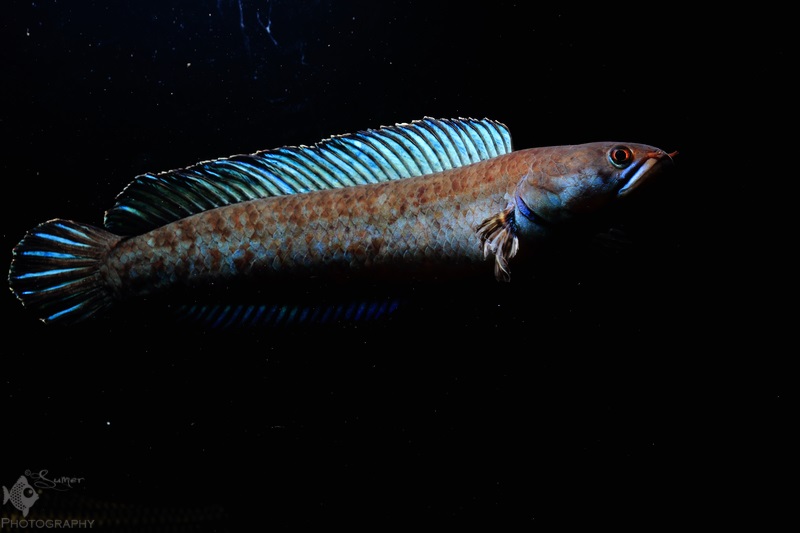 All snakeheads (which include all the Channa species) are banned in the USA. 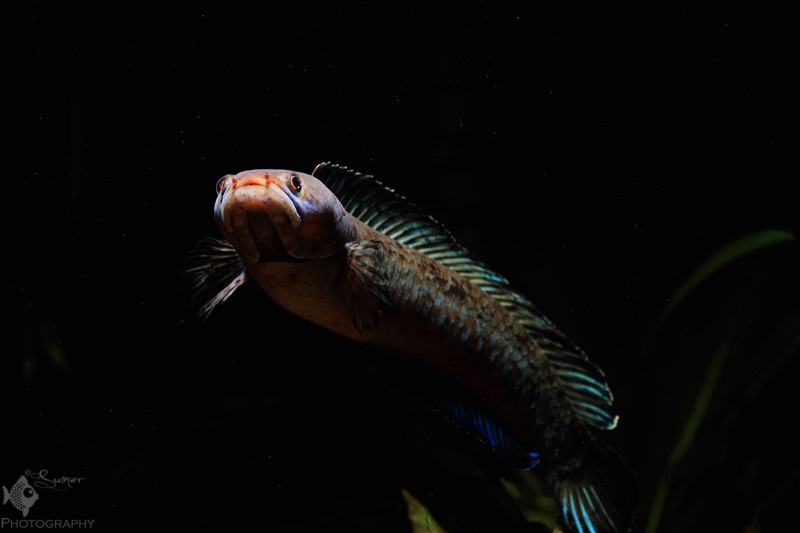 They make a great addition to any small to midsize fish room, because of thier manageable size. They don’t grow bigger than 10-12 centimeters. 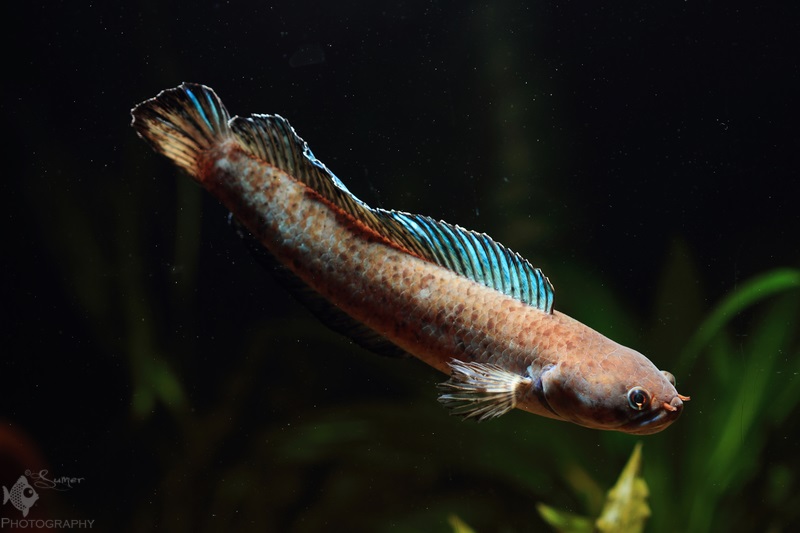 Their bright blue dorsal fin shines in the light. This is a very interactive fish.

After having breakfast, we headed out to visit another hobbyist’s place.

Bappaditya Mukhopadhyay is a lifelong aquarium hobbyist. I had heard about a very interesting project that he did on Sundarbans, and I wanted to see that project in real life. We reached his place and right away we got to see his beautiful vivarium filled with moss and tropical plants. 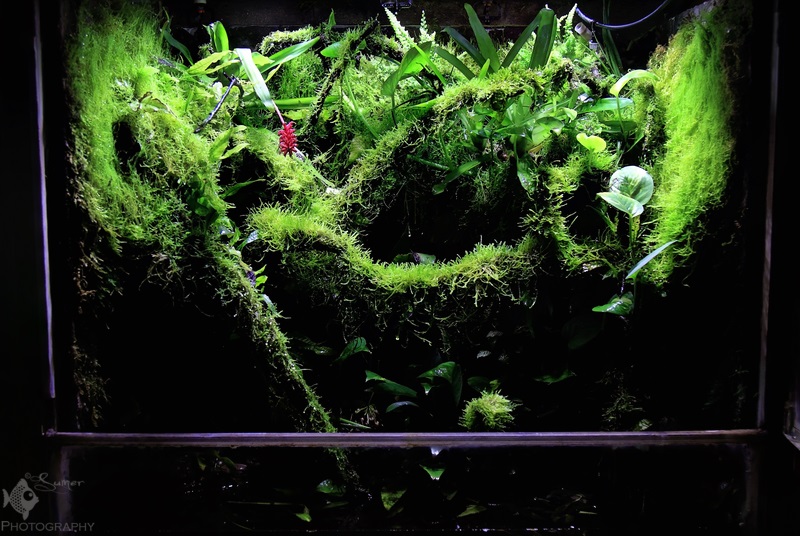 Then, finally, he took us to his Sundarban biotope tank (if you are not sure exactly what Sundarban is, please read Mike Tucc’s recent blogpost about Sundarban). It was a unique and interesting project in itself. He has created a typical Sundarban biotope: mangrove plants grow in very smooth, soft mud, while crabs and mudskippers enjoy burrowing tunnels in the mud. It really makes you feel that you are in Sundarban. He then told me that he planned this tank in such a way that it mimics high tide and low tide. He has a sump where he drains the water during low tide, and then the water fills the main tank again when it’s time for high tide.

Bappaditya says that this project was not easy at all. He had to source the mud directly from Sundarban area. Talking to officials and making it happen took a long time. All the plants that he has used were bought from the government nurseries there. Fishes love it. If there was something that I could change with this project, I would put this tank on a stand (right now it’s sitting on the floor).

Bappaditya says that he would like to create similar Sundarban biotopes for educational institutions so that he can raise awareness about it. 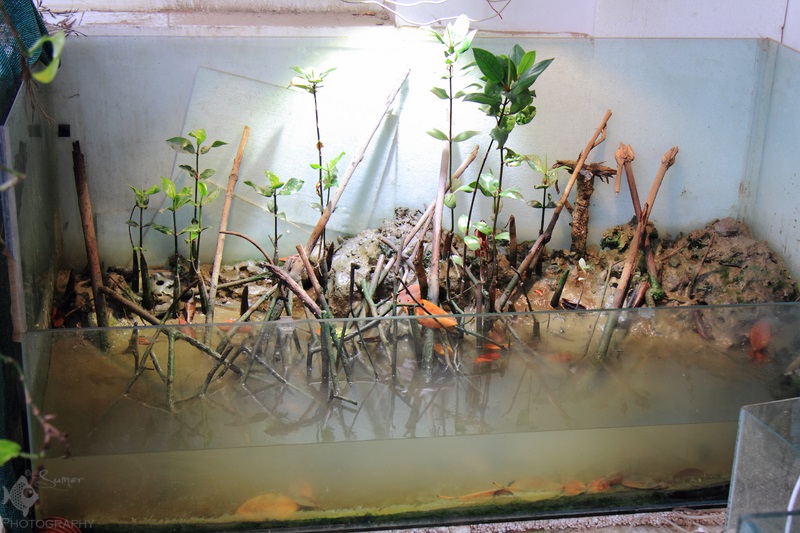 A full tank shot of the biotope that Bappaditya has created. 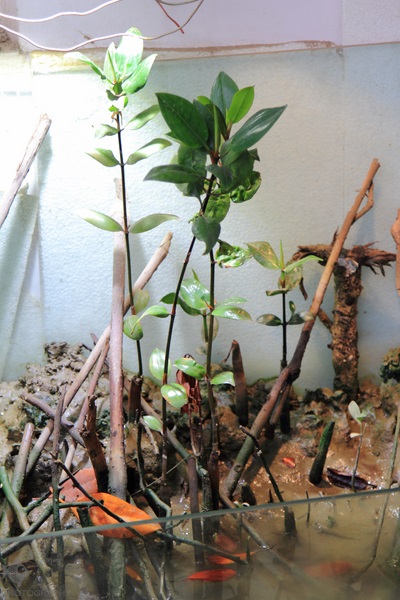 Mangrove plants are constantly growing in there. Bappaditya thinks he will have to keep replacing the mud every year or so in order to give proper nutrients to the plants. 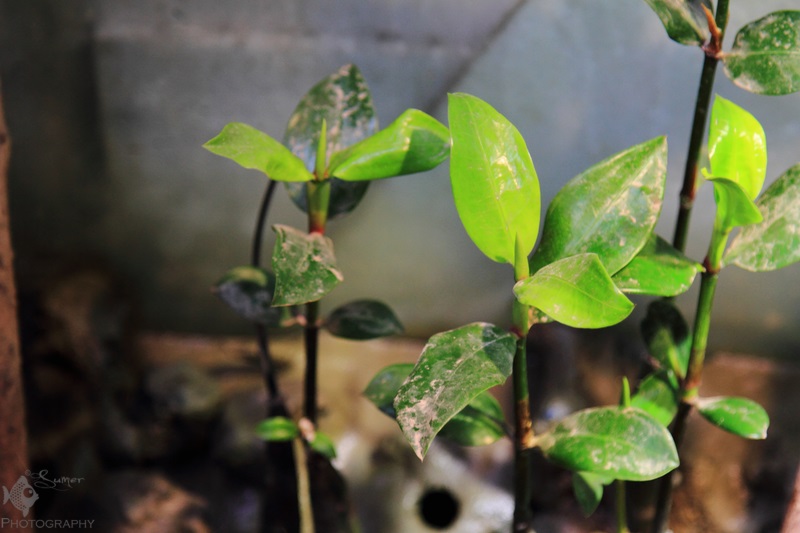 These plants are slow growers. “Every new leaf feels like a medal,” Bappaditya says.

Then Vijendra took me to our last stop, Mr. Ashok Yadav’s place. Mr. Ashok is a long time aquarium hobbyist. The saltwater hobby is not as widely popular and practiced as the freshwater hobby in India. While talking with Mr Ashok, he told me that frequent power outages, high temperature and lack of essentials in the market makes it very hard to keep the saltwater hobby going. Three-to-four-hour-long power outages are very common in Delhi (and in most of India). They can also become overnight outages, which means no movement of water for 12 hours, no filtration, nothing. The temperature reaches 114-120F almost every day during the summer. With no electricity, even the AC can’t help. Buying coral food and medicine is a challenge in itself. Ashok relies on people coming from abroad to bring in such supplies.

But despite all those difficulties, he is maintaining a beautiful saltwater tank. 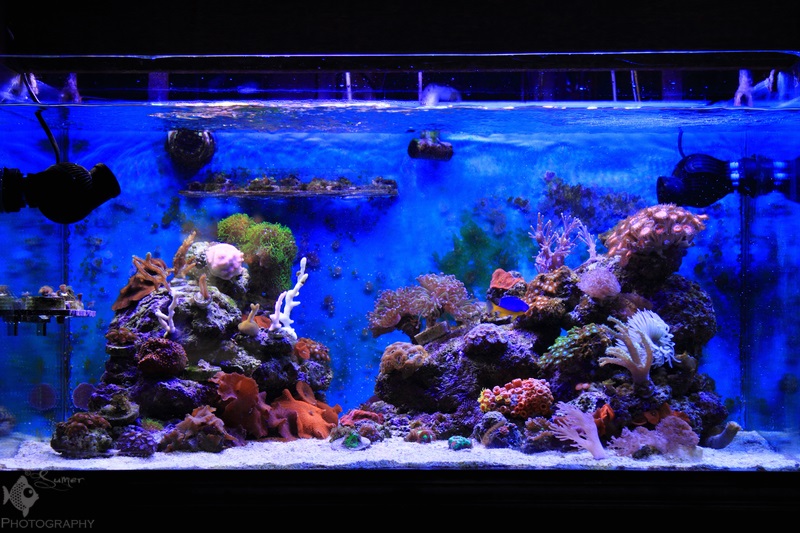 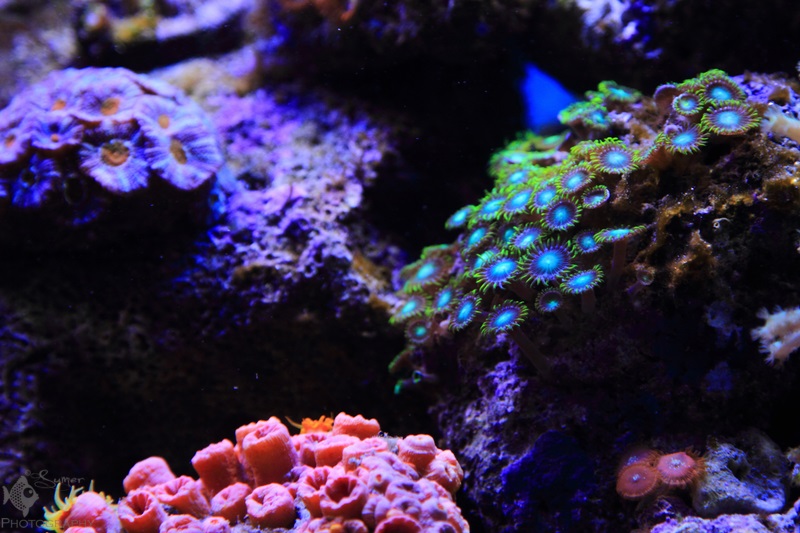 Despite the power outages, Mr. Ashok has done a great job at keeping the tank in good shape. 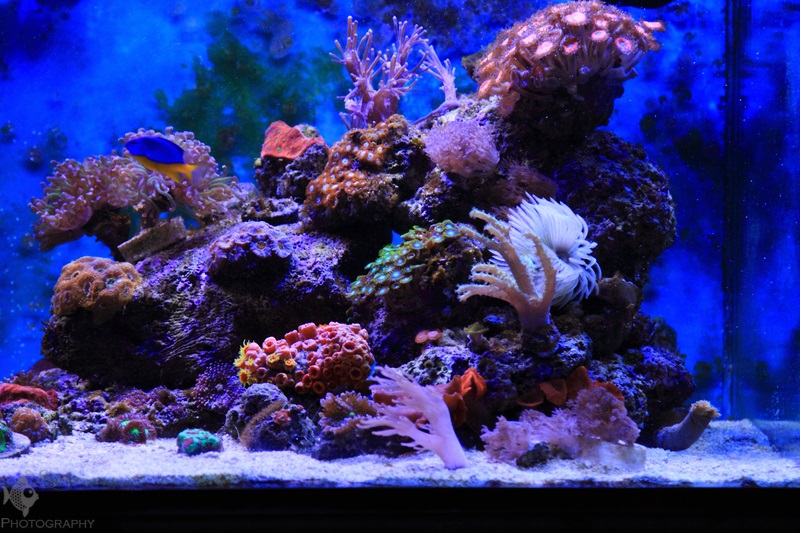 While we were at his place, we saw two power outages. A 10-minute-long one and another one which lasted a couple of minutes.

After that, we came back to Vijendra’s place. His wife Gauri welcomed us with some amazing food. In the evening I had my flight to my parents’ place. After spending some quality time with my parents, I would start the journey that took me to some of the most amazing fishes in Southern India.