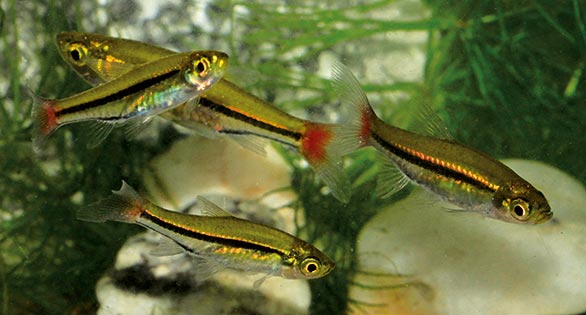 Always best kept in groups, the Brilliant Rasbora is a species with strong shoaling instincts.

Forgotten Rasboras—
the “golden ones” from the south

Rasbora is a species-rich genus within the family Cyprinidae. Its representatives live exclusively in shoals, often referred to as swarms. These colorful species can dress up an aquarium at least as well as a school of Neon Tetras. Most Rasboras are easy to maintain and can be bred even by less-experienced aquarists.

Nevertheless, Rasbora species are quite rare in fish shops. Only the closely related Mosquito Barbs of the genus Boraras and the Harlequin Rasboras of the genus Trigonostigma, a perennial favorite, are sold in the aquarium trade with any regularity. Why this is so remains a mystery to me, but with the introduction of the colorful Rasbora borapetensis, of which there are various color populations over its huge range, perhaps the lack of interest in this group can end. 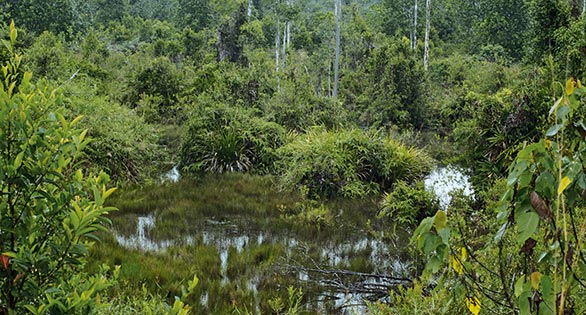 In southern Thailand and northern Malaysia, pristine marshes are few and far between. Habitats such as these extensive swamps are home to many aquarium fishes, including the Red-Tailed Rasbora, Rasbora borapetensis.

This fish bears a misleading scientific name and an array of trade labels. The common English name “Blackline Rasbora” is a poor choice, as there are several black-lined Rasbora species. Better names would be “Red-Tailed Rasbora” or “Brilliant Rasbora.” The species epithet borapetensis is derived from Bung Borapet, one of the largest lakes in central Thailand, which is in the province of Nakhon Sawan. This suggests a very limited habitat for the species. In fact, this fish can be found throughout the central Thai lowlands to the southern province of Prachuap Kiri Khan. In the east of Thailand, I found this fish in Ubon Ratchathani province and in neighboring Laos. Rasbora borapetensis also lives in the lowlands of the other provinces in eastern Thailand, and it is also known from Cambodia. 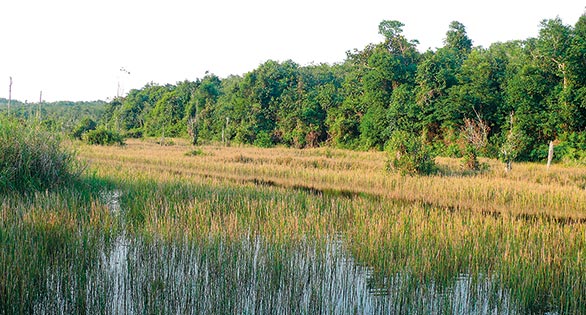 West Malaysian swampy area where the author found the rasboras he was seeking.

Rasbora borapetensis is rarely found in southern Thailand, and in the area between the districts of Surat Thani and Yala there seems to be a distribution gap. Only in the province of Yala does it become common again. Rasbora borapetensis is almost omnipresent in the lowlands of Malaysia’s east coast. The species probably populated the vast plains of the Gulf of Thailand and the South China Sea at a time when these seas did not yet cover the landscape. In my opinion, R. borapetensis wandered through this central point via the river systems of the Mekong and Chao Praya, north toward Thailand. Currently, there is a northern and a southern contiguous habitat.

That separate populations with different color forms are found in such a large distribution area is not surprising. Another species that is very similar to R. borapetensis is R. rubrodorsalis, described by Donoso-Büchner and Schmidt in 1997. The name says it all: the dorsal fin of these fish is red, a feature that R. borapetensis lacks. 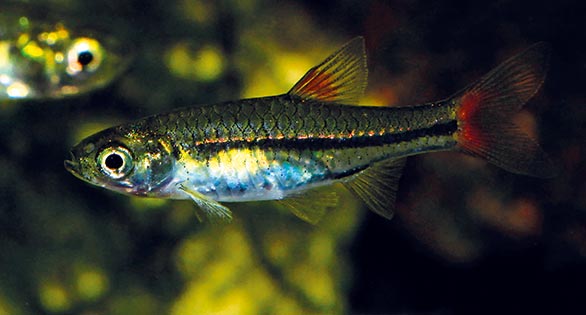 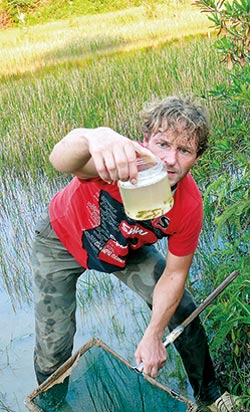 Author Jens Kuhne collecting “the Golden Ones” he had been told about.

In the southern part of the range—in West Malaysia—I found populations that can be referred to as “Golden Red-Tailed Rasbora,” one of which is in the extreme southeast in the state of Johor, near Singapore and near the equator. This must be emphasized, because collecting here can be a burden at times due to the lack of rain. In these mostly unshaded waters close to the equator the sun is particularly extreme, and you have to leave the water after an hour—not because of leeches or mosquitoes, but because thirst and sunburn prevent further activities. It is incredible, but the sun in Malaysia is a little stronger than it is in southern Thailand, although they are only six degrees of latitude apart.

A few of the swamps in this region have escaped being turned into palm oil plantations. Along beach road no. 92 there are still some contiguous habitats. I recognize them as similar to biotopes that I found north of Terengganu and classify them as “moderate peat swamps.” Unfortunately, these are not extreme peat bogs with pH values below 5, but just “death swamps,” as I call them, because you usually cannot find any interesting labyrinthfishes in them. The diversity in such habitats is, of course, far from being “dead.” Such swamps contain interesting plant groups, such as pitcher plants (Nepenthes), and also various bladderwort species (Utricularia). These are all carnivorous plants, and the relationship is clearly demonstrated by the poor soil. Fishes and other aquatic life are plentiful, and you can always spot something interesting.

Rasbora borapetensis frequently ended up in the net here. In the Malaysian sun they shine with an intense golden color, in total contrast to the fish that I knew from central Thailand. I bagged at least 30 of them. From Terengganu I know that these fish in Malaysia are very sensitive during transport, and I wanted to observe them in the aquarium and check on their “color fastness.” Despite using careful techniques, such as keeping the fish in water while transferring them into the shipping container, using only crystal-clear, distilled drinking water, and employing a large bag, 10 of the pretty fish died. They are very sensitive, unlike the animals from central Thailand. The latter are always hardy during transfer and transport, even when they have not been collected very carefully. The water in the marshes had a pH of 6 and an electrical conductivity of 20 µS/cm. The temperature in the surface region was extremely warm, 95°F (35°C); 4–6 inches (10–15 cm) below the surface a more bearable 82°F (28°C) was measured.

In the Aquarium
Rasbora, even the golden Red-Tailed Rasbora, are easy to keep and resilient in the aquarium, in contrast to the difficulty of shipping them. Of course, the water values of the biotope should still be respected because, in my opinion, they are necessary for maintaining the fishes’ golden hue, even though their color is a largely a result of their continued well-being and not of the humic substances in the water.
The aquarium should contain at least 10 gallons (40 L) for a school of 20 fish. The more animals, the better—but they need plenty of swimming space, too. Because they are joyful but not frantic swimmers, regular water changes are important because of their metabolism. Dense plant thickets should be offered in the aquarium, where they also spawn spontaneously. Since all Rasbora are spawn robbers, a pairwise breeding attempt should be made to increase your chances of success. 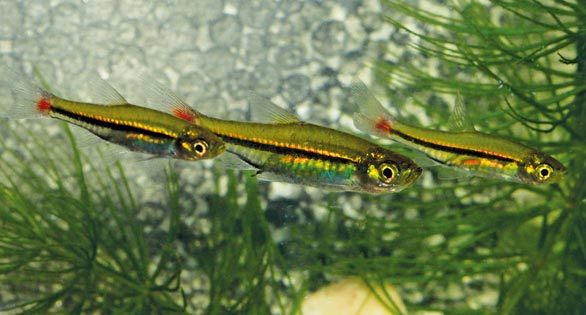 Ideal fish for planted tanks, the Brilliant Rasbora makes a great showing in groups of 10 or more.

Rasbora accept any feed but prefer live food. In particular, Daphnia and Artemia, as well as all other small crustaceans, are critical to maintaining the beautiful golden color of these fish. In an experiment that involved feeding the fish exclusively with black mosquito larvae over a period of two months, the color faded.

The “golden ones from the south” have now been swimming for more than a year in the aquarium and still retain their beautiful color. If you like schooling fishes and want variety without the unpredictability of the Neon Tetra, you should consider fish from the Rasbora group; the “goldens from the south” are especially worthwhile if you can find them.