My Time with Blinding LEDs from APACHE TECH 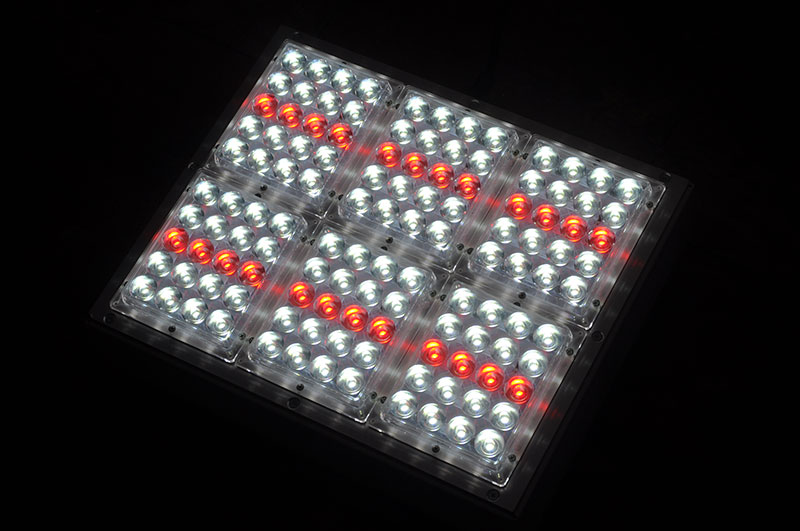 A vastly “toned down” view of the AT120 running; automatic camera settings would have shown nothing but blinding light! Shown and used is the AT120WR, White Red 4:1, a version designed for freshwater plant growth.

About 16 months ago, I received a note from a good friend asking if I wanted to try out an LED lighting fixture from a company he had started working with.  The company was one I hadn’t heard of, U.S.-based Apache Tech. After talking about potential projects I could set up with such a light, they sent me a light system suitable for freshwater planted aquaria, the intended use being a 54-gallon corner tank that I’d try setting up with plants.

I’ll outline my experiences in just a minute, but this observation might sum it up best: If you want to wear sunglasses in the fishroom, Apache Tech has the answer. While their main audience is the hydroponic and greenhouse sector, Apache Tech offers a wide range of LED lighting units suitable for aquarium use.

The AT120 line might be overkill on smaller home aquariums. The real value is apparent in large scale, commercial, and public aquarium applications; Apache Tech designed these lights initially for public aquarium use. “The intensity is suitable for tanks as deep as 20 feet or for shallower tanks that require high light levels without generating the heat of conventional lighting sources.”  While the AT120 is still available, I was told last year that Apache Tech is now also going to be introducing a new, even more powerful line, the AT200. 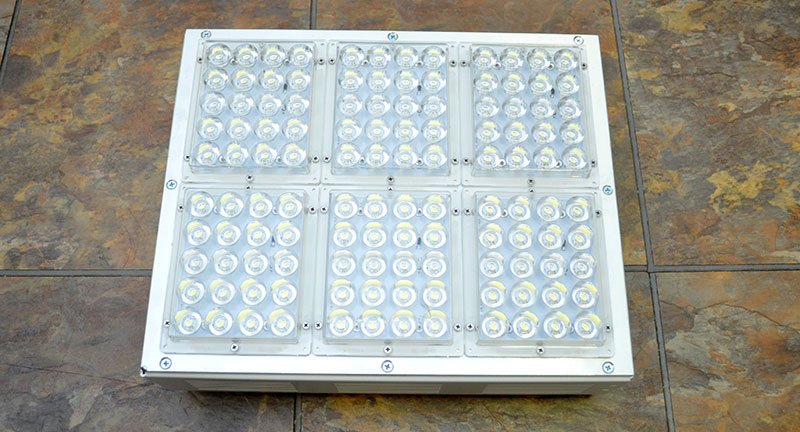 A view of the business end of the Apache Tech AT120 White Red 4:1

What I Tried Out

I was sent a fixture from the AT120 line, which is said to surpass the lighting output of a 400-watt Metal Halide, or per their specifications, “These high intensity arrays…are comparable in intensity to conventional 1000W HPS lights and produce more usable (PAR) light than the conventional 600W HPS, while consuming approximately 80% less power.”  For anyone who hasn’t already figured it out, HPS = High Pressure Sodium.

With the AT200 not yet available for examination and review, Apache Tech furnished me with a demo unit of the AT120.  The particular model they sent is the AT120WR, White Red 4:1 (basically 4 white LEDs for every 1 red LED). They suggested particular combination as an ideal mix for use over a freshwater planted aquarium.

There are seven variations of the AT120 LED arrays, including straight white, white, and red in 2 ratios; white and actinic/blue in 3 ratios; and straight actinic. Apache Tech recommends the straight white as ideal for freshwater settings; they go into some detail with their white/blue combinations.  “The white/blue light combination (AT 120WB) comes in several color temperatures. The 8300K is ideal for fish-only or macro algae production tanks. The 10K adds a little more blue and is ideal for fish-only or bright reef tank applications. The 14K light has superior color rendition for deeper water reef aquariums. The 100% actinic is a wonderful complement for deepwater tanks.”  I should note that the White:Red combinations are ideal “grow lights,” and the additional red spectrum may be helpful for freshwater planted aquaria.

The forthcoming AT200 line is said to be a little more restricted in spectrum options.

Energy Consumption of the AT120WR

Regarding energy consumption, there seem to be some inconsistencies in the information I could obtain. As relayed through a third party, each AT120 unit includes 120 one-watt LEDs, along with cooling fans, which is said to bring the total electrical consumption in at 140 watts, +/- 5 watts. However, a test of the unit we were sent, plugging into a Kil-a-watt, showed the unit running a little higher, drawing around 170 watts; we were told this most likely would be due to dirty or failing fans. 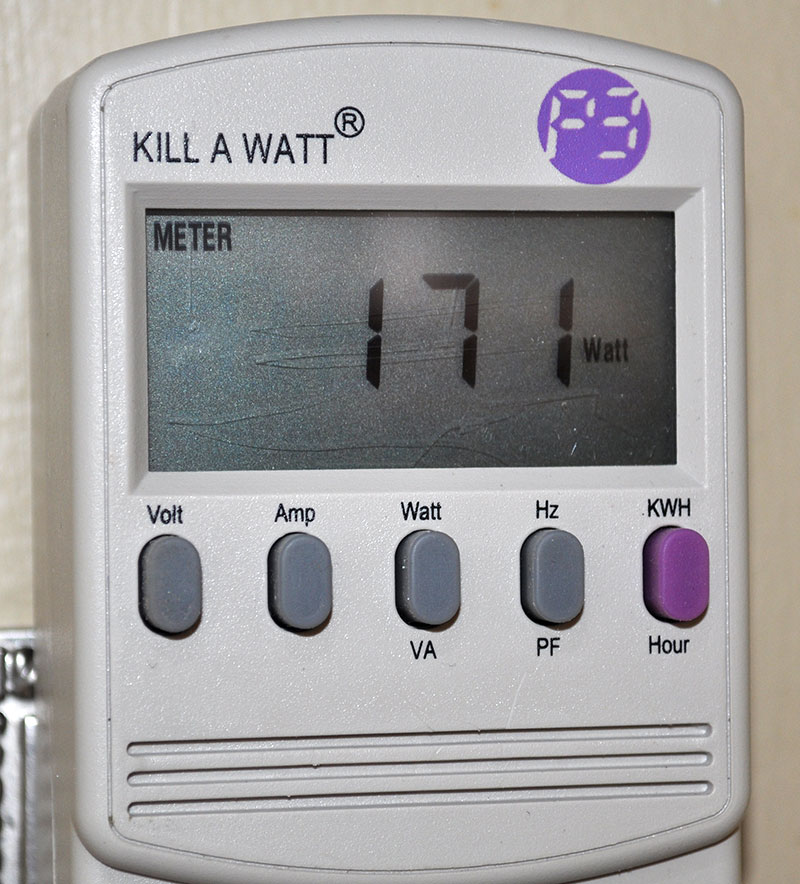 Actual watts consumed as measured by the Kill A Watt. 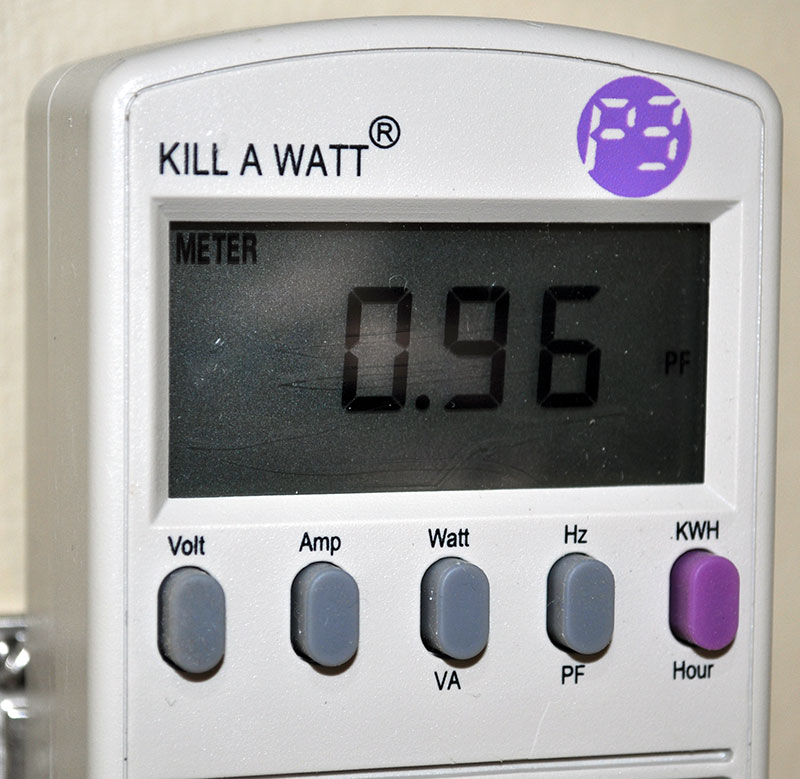 Power Factor of the Apache Tech LED as measured by the Kill A Watt; this can be a very important number with LEDs. 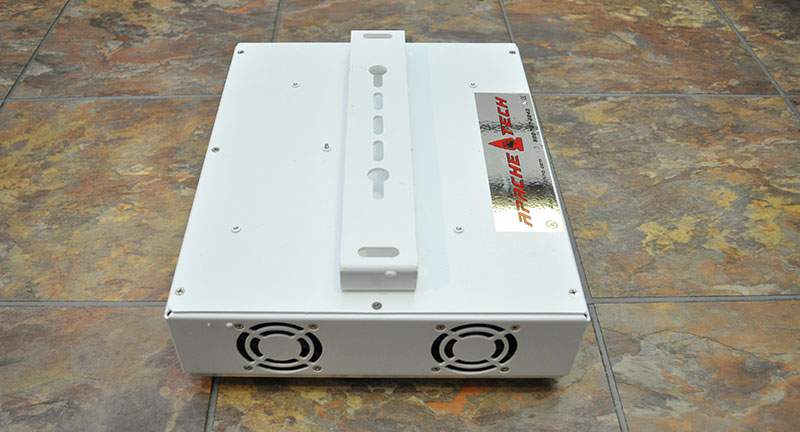 Cooling fans on one end of the AT120 LED Aquarium Light.

However, other Apache Tech literature suggests that in fact, these units do run higher than the 140 watts as originally explained, from the online brochure: “Impressive output of light for a minimal input of power, 1750 PPF @ 165 watts.” Obviously this 165-watt number falls well within the expected range of what we tested. The forthcoming AT200 line is said to consist of 3 120-watt arrays (360 watts), but they are driven at only 240 watts total, plus cooling fans, for a more efficient light output. It will be interesting to see what the final numbers are.

The AT120 line also has two lens options: it can be ordered with either 14-degree or 50-degree spreads.  The patented lenses are interchangeable. 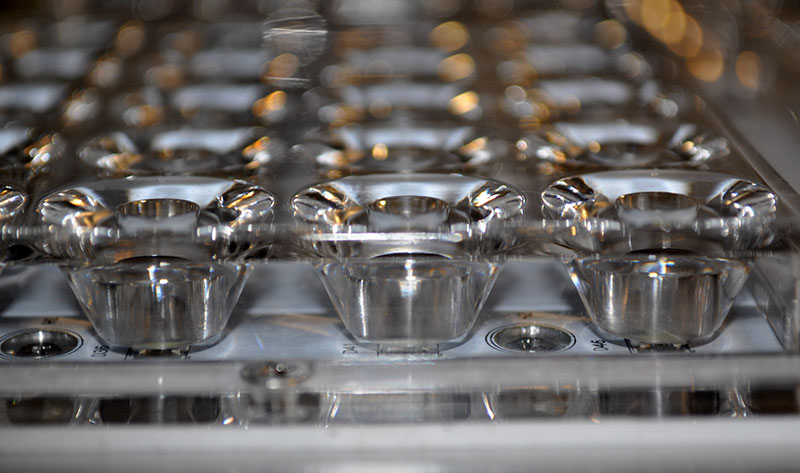 The interchangeable lenses come in 14 degree and 50 degree options; this side view demonstrates the heavy duty approach taken in creating them. 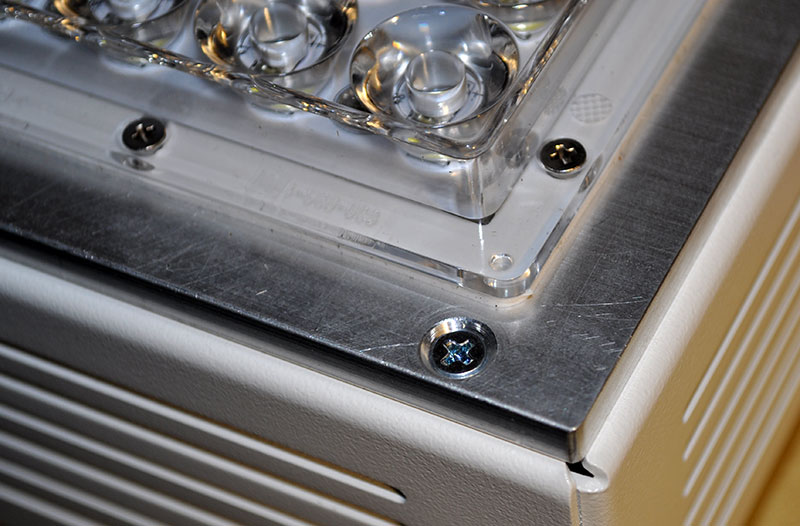 Remove a few screws and the lenses can easily be swapped. 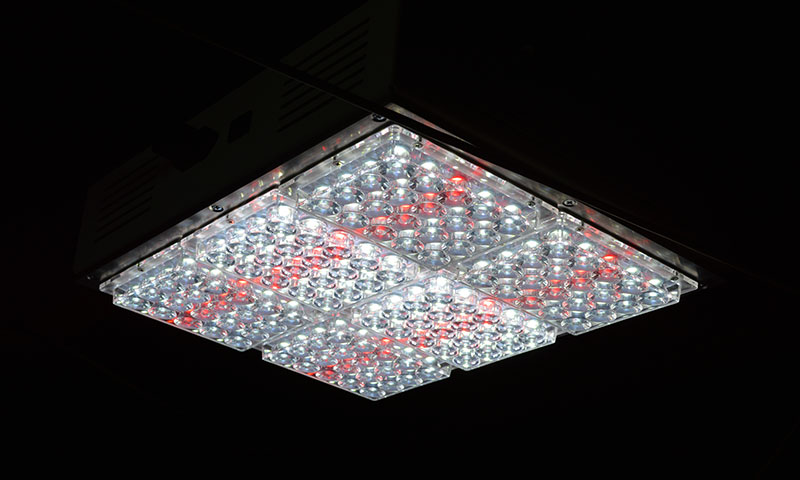 A demonstration of the interchangeable lenses can be seen here; Jake suggested we leave the outer ones at 14 degrees, while the inner ones he swapped to 50. This created a very uniform cone of light over the pond. The center row looks brighter because less light is being focused “straight down” (and thus more is bleeding over to the camera)!

The overall LED array is compact but solid; lots of aluminum goes into this 11″ x 14″ X 3″ housing. The lights is also very heavy, so solid mounting or hanging is required. 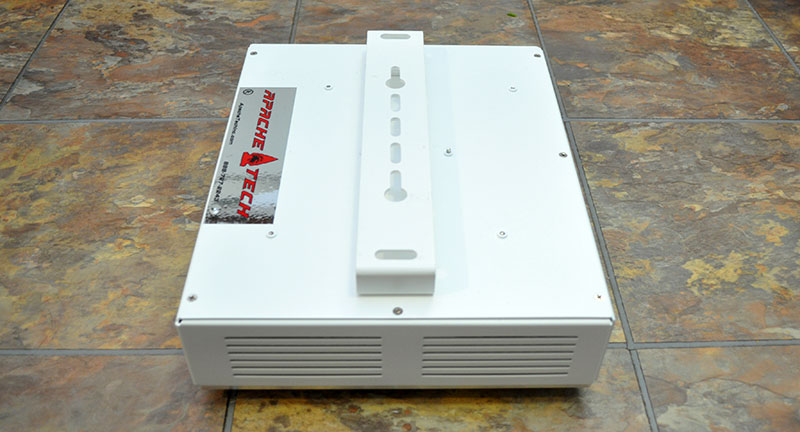 A heavy duty metal mounting bar is the starting point – how you install it is up to you! 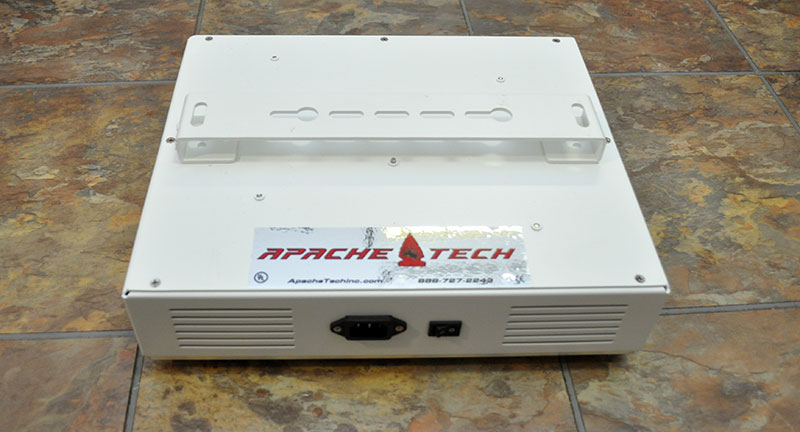 Removable cord and power switch on the Apache Tech AT120.

I have to say I made the idiotic move of turning it on while the lights were facing up. No joke, I was bedazzled, almost blinded. I had to look away; it was like looking at the sun.  Again, according to Apache Tech literature, these units are said to produce 1750 PPF for 165 watts; per at least one third party website, 1750 is almost on par with a noon-day sun!

While I had initially planned to try this lightning unit out on a 52-gallon corner tank as a planted setup, it was quickly apparent that this was complete overkill. Instead, in January 2014, Reef Builders Editor Jake Adams and I installed it over the 300-gallon saltwater “pond” I run in the basement fishroom. Jake had the bright idea to make some adjustments with the lenses, leaving the inner lenses set with the 50-degree spread, but the outer lenses on left and right replaced to the 14-degree spread option. This mixture of settings allowed for very consistent coverage over the entire 8-foot diameter of the pond, with enough light to grow macro algae at the bottom of the pond. 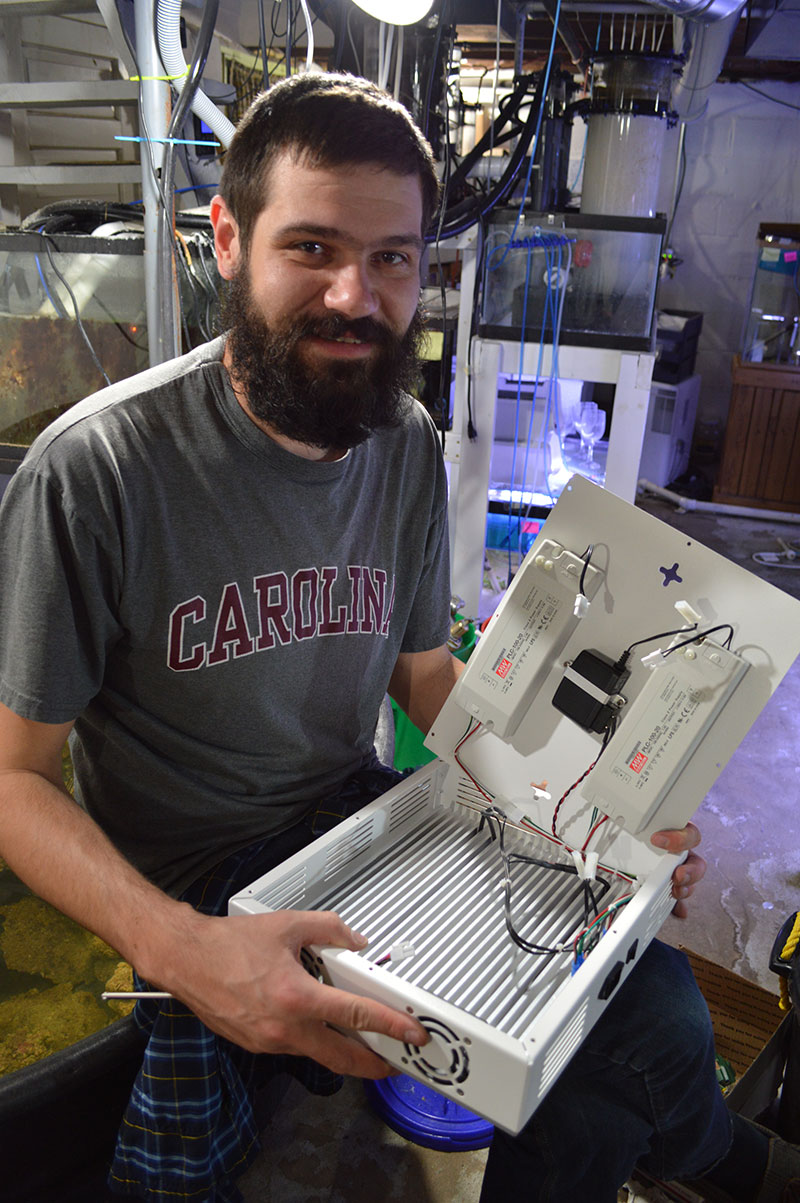 Reef Builder’s Jake Adams shows us the interior of the AT120.Check out that chunky heat sink!

I had several mangrove pods on hand; I had been jokingly suggesting I was going to simply grow full-blown mangrove trees in the basement. The pods had been on hand at least 2-3 months, and had not done anything with daylight fluorescents in clamp lights. Within a week of installing and running the APACHE TECH light over the pond, all the viable mangrove pods had sprouted first growths.

Over a Longer Time Period

The light worked extremely well for my application; it was a good 4 to 5 feet above the water’s surface. I know we took PAR readings at one point with it, but sadly I cannot find those anywhere. With a lot of changes to the fishroom during 2014, and more slated for 2015, the pond was taken offline and the light was no longer in use. I had no issues over an extended period with this light; it still shines bright and blinding and should for many more years. Because it is an actively cooled system, the cooling fans DO make some noise, but in a fishroom setting I never noticed it and I doubt it’d cause any issue in any commercial / industrial type application. 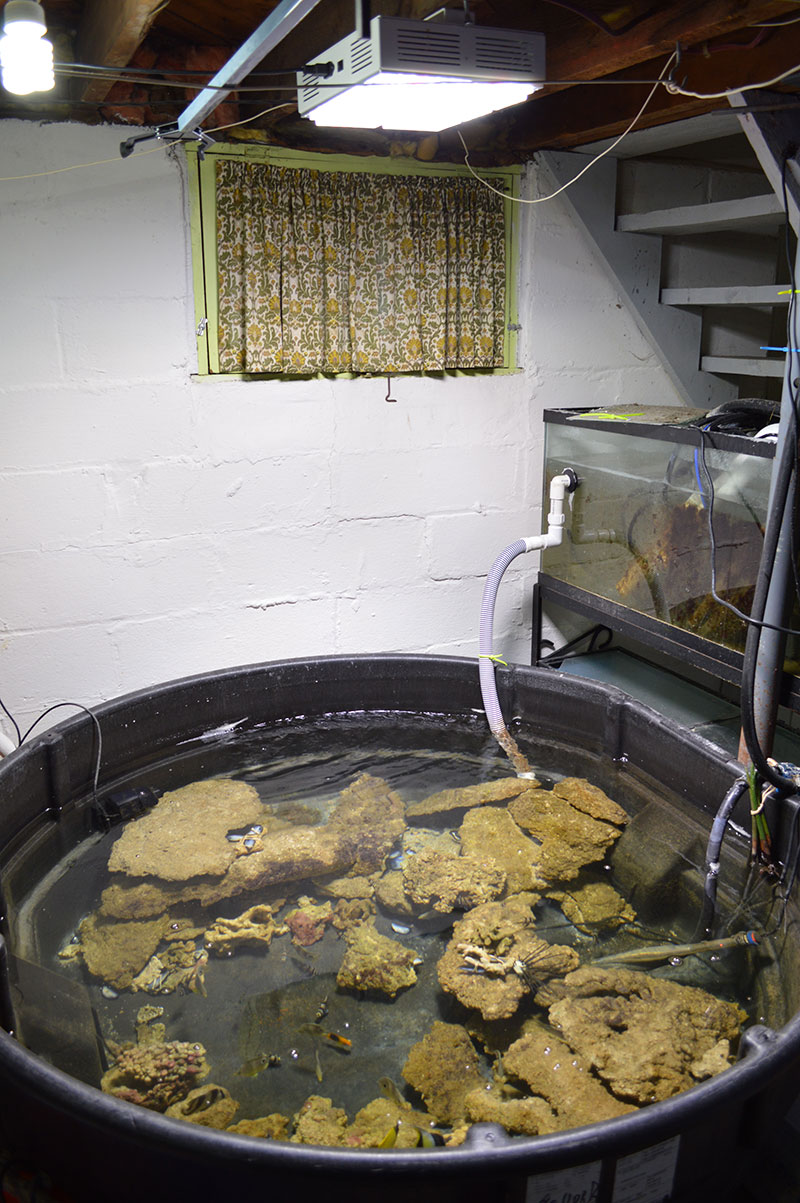 The Apache Tech AT120 4:1 White:Red fixture illuminated my old 300 gallon “rubbermaid pond” with ease, even though being several feet over the water’s surface.

As of April 2015, retail pricing on the AT120 line is $859.00. Given the cost of a 400-watt metal halide system, and the changing of bulbs every 6-9 months, it’s fair to say that these fixtures represent a value. Big tanks need BIG LEDs, and Apache Tech doesn’t do things very small!

Perhaps more importantly, the Apache Tech light does seem to represent a really high-quality, Made-in-the-USA product. It is not a cheap Chinese black box, nor was it ever designed with the intent to compete with such products. Still, this video (which I believe is a 3rd party production) compares the construction of an Apache Tech AT120 with a “typical 300-watt Chinese-made Grow Light.” I believe that most of our audience might know enough about LEDs to instantly see the differences between these two products.