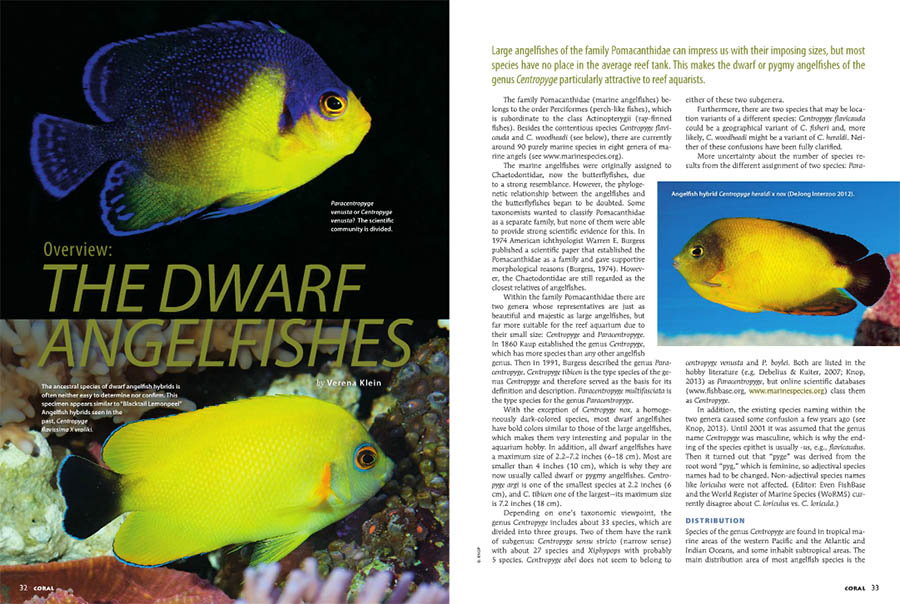 The opening spread of Verena Klein’s article, “Overview: The Dwarf Angelfishes”, appearing in the March/April 2015 issue of CORAL Magazine.

The editorial staff at CORAL Magazine regrets to note a few errors discovered in Overview: The Dwarf Angelfishes, by Verena Klein.

These errors were discovered during our editorial review process, but somehow slipped through the cracks and were not corrected before the March/April 2015 issue was sent to our printers. We were surprised when print copies showed up, and we discovered the following errors remained. These errors are being corrected in our digital edition, and we regret any confusion these errors may cause.

On page 32, the caption for the lower fish remarks that this fish is likely Centropyge (nox X heraldi), but in fact, they telltale blue eye ring is a dead giveaway that the fish in fact has Lemonpeel Angelfish (Centropyge flavissima) origins. The caption in the print edition should read:

The ancestral species of dwarf angelfish hybrids is often neither easy to determine nor confirm. This specimen appears similar to “Blacktail Lemonpeel” Angelfish hybrids seen in the past, Centropyge (flavissima X vrolikii).

On page 33, end of the first column, there are some inaccurate numbers; these are in part due to the very recent description of Centropyge deborae from Fiji. This species was in fact not included at all in any of the original German text. Additionally, the current information regarding Centropyge shepardi did not support the original statements made by the author at an earlier time. Given the current taxonomic statuses and opinions regarding Centropyge and Paracentropyge, the paragraph should read:

Depending on one’s taxonomic viewpoint, the genus Centropyge includes about 33 species, which are divided into three groups. Two of them have the rank of subgenus: Centropyge sensu stricto (narrow sense) with about 27 species and Xiphypops with probably 5 species. Centropyge abei does not seem to belong to either of these two subgenera.

On page 37, the top left fish is listed in print as the Yellow Angelfish, Centropyge heraldi. This is of course, flat out incorrect. The fish shows clear signs of the blue eye ring known to be Centropyge flavissima. We might have thought this to simply be a misidentification between species, but closer examination also reveals the presence of a black margin on the caudal fin and an overall reduced, more muted color palette. In fact, it is the belief of multiple people who have viewed this image that in fact, this is another “Hybrid Lemonpeel”, albeit one that leans heavily towards the C. flavissima parent (possibly the product of hybrid back crossing in the wild). As such, the caption on this photo was supposed to read:

Compared with Centropyge flavissma on page 34, this specimen shows signs of possible hybrid influence of C. vrolikii (at right).

In two articles Pedersen contributed to, he used the spelling of C. vroliki (eg. page 31, page 53 caption), whereas in our other articles (and even in Pedersen’s texts), the spelling of vrolikii remained unchallenged by Pedersen during our editorial process. Fishbase and WoRMS both cite vrolikii as the correct spelling of the species name, making vroliki a synonym.

However, it should be noted that the spelling (or misspelling) as C. vroliki is very widespread and prevalent to this day online, being used by many generally well respected sources. A quick check of texts reveals the spelling as recently as 1998 in Angelfishes & Butterflyfishes by Gerald R. Allen, Roger Steene and Mark Allen.

This said, CORAL Magazine usually abides by the current taxonomic ranks and spellings as outlined in Fishbase, and editorially Centropyge vrolikii is therefore considered the proper spelling at this time (and Pedersen chuckles when he says “Darnit, I should have checked this one against Fishbase!”).

Notice any other mistakes?  If so, never hesitate to email us about them or comment about them on our website.