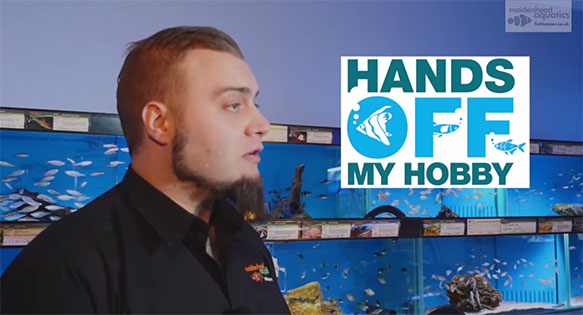 Maidenhead Aquatics discusses OATA’s Hands Off My Hobby campaign in a new video.

Aquarists around the world may not be aware of growing concern for the aquarium hobby and industry in the United Kingdom.

Fearing crippling new livestock regulations, the trade organization OATA (Ornamental Aquatic Trade Association) is calling on aquarists and industry members to act in their “Hands Off My Hobby” campaign.  The latest contribution of support comes from UK-based aquarium retailer Maidenhead Aquatics, who created this video.

It is in response to the emergence of a number of European groups opposed to the import, sale and keeping of “exotic pets”—including most tropical fish species, freshwater and marine, wild-caught and even captive-bred. Some observers warn that the movement to ban many types of pets may also be poised to spread beyond the Euro zone, and North American industry leaders should not consider the trade here off limits to attack.

Hands Off My Hobby: Fishkeeping Under Attack

“Maidenhead Aquatics was established in 1984 and is now the UK’s largest leading specialty aquatic retailer with stores throughout England, Scotland, Wales and Ireland.” Read more at: https://fishkeeper.co.uk/storefinder

“OATA was established in 1991 to promote and protect the ornamental aquatic industry, encompassing coldwater, tropical freshwater and marine tropical fish and invertebrates together with aquatic plants for the aquarium or pond. The Association currently has over 700 UK members from the import, distributor, manufacturer and retail sectors.” Read more at: http://www.ornamentalfish.org/about-us