Gorgonians and Sea Fans – An Introductory Look (and Video) 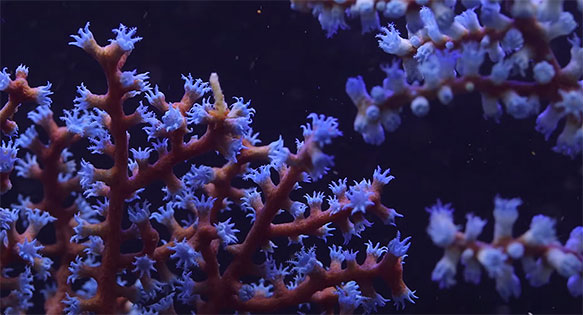 Gorgonians (including Sea Fans) are a diverse family of corals that are found throughout reefs around the world. Despite their widespread distribution, they are not a particularly common coral in the reef aquarium hobby. What sets them apart from other corals is the presence of a protein called gorgonin. Gorgonin gives the gorgonian a distinct leathery texture; it is similar to the touch to some soft corals, but is more rigid and gummy, as if it were made of cartilage.

Gorgonin allows gorgonians to mimic the flexibility of a palm tree blowing in the wind. In the wild, gorgonian sea fans blow back and forth in strong surges while maintaining their fanlike shape.

In the Pacific, there are far more non-photosynthetic varieties that come in boisterous colors such as reds, yellow, blues, and there are even some that have rainbow-colored polyps. The problem with Pacific gorgonians is the “non-photosynthetic” part. Non-photosynthetic corals in general are a challenge to keep alive because they require regular feeding for proper nutrition.

Filter-feeding non-photosynthetic gorgonians and sea fans are particularly challenging to maintain in captivity because of the shear quantity of food they require. In the wild, they have access to a nearly continuous supply of food in the water column, but this is practically impossible to reproduce on the hobby scale. Attempts to provide constant food availability often result in poor water quality, as most of the food goes uneaten and exceeds the filtering capacity of the reef aquarium.

Second, provide strong water flow. In the wild, you would be amazed by how much back-and-forth surge gorgonians receive. In addition to increasing access to food in the water, this helps gorgonians shed their skin every few weeks, a method of discouraging algae buildup on the body. I personally like wave devices such as a Tunze wavebox, which creates a nice, slow, back-and-forth surge.

Third, whether you end up with a photosynthetic or non-photosynthetic sea fan, make an attempt to feed it. There are several manufacturers that make dry powder foods tailored to gorgonian nutrition. In particular, this food is designed to be the appropriate size for feeding gorgonians’ relatively small polyps, and is the appropriate density to remain suspended as long as possible, which provides sea fans the largest window of opportunity to feed. At Tidal Gardens, we have not tried them all out, but hopefully a mix of a few brands will be the key to healthy sea fans in the future.

The fourth and final tip is in regards to lighting. Give the photosynthetic sea fans plenty of light. They are generally found in very shallow water and receive intense lighting during the day.