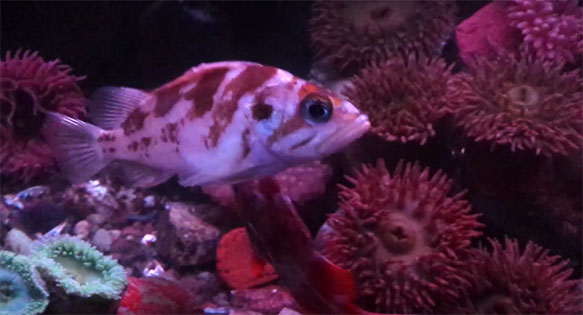 A screenshot from video of Paul Hallmark’s thriving, vivacious coldwater reef aquarium. Temperate marine aquariums like this are yet another way aquarists can diverge from the monotony.

Last year, CORAL Magazine featured an emerging subset of the marine aquarium hobby, the coldwater or temperate reef aquarium.  Technically, the keeping of temperate marine life in home aquariums is certainly nothing new, but technological advancements (and a seeming surplus of used lobster tanks) have combined with increasingly available livestock to propel the Cold Reef into aquarists’ homes around the country (and the world). This increased interest has spawned, among other things, a Facebook community called Coldwater Marine Aquarium Owners, and unlike most public aquarium-related Facebook groups, this is one I dare say is actually worth following.

Recently, one of the members, Paul Hallmark, shared a video update of his aquarium. What struck me about Hallmark’s recent tank update is the high coverage of life on display. I asked Paul for a brief history of the aquarium, and this was his response:

“This tank started out with me trading a 30-gallon carpet anemone tank for a lobster tank that didn’t work. It sat for a couple months until I got hurt at work and had plenty of time to fix it up. I sprayed in the foam rock and painted on the coraline. I dumped 5 gallons of bio-balls into the sump that is directly underneath the slotted fiberglass floor. It works like a big under-gravel filter. Once it was filled with water, I took a couple camping trips to the Oregon coast and did a ton of collecting. And, after some orders came in from Coldwater Marine Aquatics, it was up and running with tons of livestock right off the bat. In fact, it made reef of the month on Reef Frontiers before its one month birthday! I think it was just because it was so different from anything else.”

Hallmark continued, “It has stayed pretty much the same in design with more critters added here and there. For the first year it had a Garibaldi damsel and a ton of bottom fish. But Stu and Josh started bringing in rockfish and I haven’t looked back. There is a Vermillion, a Copper, a Calico, and a Treefish. There is also a Red and White Scorpionfish, a One Spot Fringehead, [and] a Black Eye Goby. [The tank also houses] a dozen species of anemones, [along with some] plating hydrocoral, Batstars, Ochre Stars, Purple Sea Urchins, and assorted clean-up-crew guys.”

Hallmark’s tank wasn’t immune to the mishaps aquarists sometimes face. “This tank went through a crash a while back,” lamented Hallmark, “due to an air pump being switched off. And I lost a lot of fish and anemones. But it’s doing great now.”

Enjoy this recent video of Hallmark’s coldwater reef aquarium – I certainly did!

You can follow Hallmark’s tank from inception to present on his Reef Frontiers build thread.