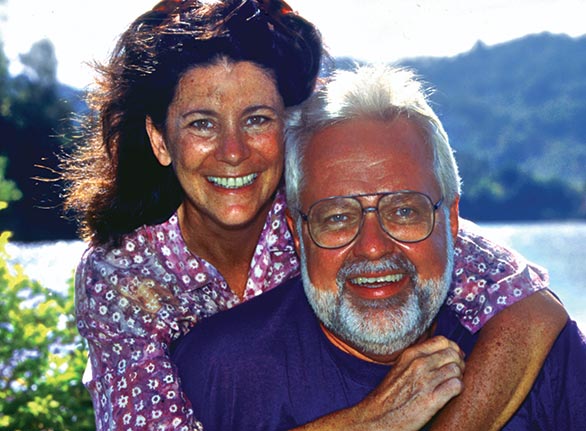 Denise Nielsen Tackett with her co-author and life partner Larry P. Tackett, circa 2000.

It is with profound sadness that CORAL Magazine announces the death of Denise Nielsen Tackett, 67, a long-time senior contributor and one of the world’s most-respected photographers of undersea marine life.

A note from her husband and co-author Larry P. Tackett February 23, 2015, said: “I wanted to let you know that Denise lost her 8-year battle with cancer this afternoon. She passed away peacefully and in no pain.”

A resident of Paden City, West Virginia, Denise had traveled the tropics of the world for many years, primarily in the Indo-Pacific, photographing the beauty and biodiversity of coral reefs. She and Larry also spent 13 years collecting sponges and other organisms in a search for disease-treating natural compounds being sought by the Cancer Research Institute of Arizona State University. During these years, both Denise and Larry honed their skills as underwater photographers, eventually amassing a world-class collection of images of fishes and invertebrate life.

A collection of their photographs and observations of tropical environments appeared in REEF LIFE: Natural History and Behaviors of Marine Fishes and Invertebrates (Microcosm/TFH Professional Series, 2002). With her husband Larry, she annually created an acclaimed Reef Life Calendar with portraits of reef fishes, corals, and other denizens of the tropical shallows. She is credited with discovering one of the world’s smallest seahorses, named Hippocampus denise in her honor.

“Denise was a woman of incredible character and strength,” said Editor & Publisher James M. Lawrence. “For some 15 years, I had the joy of working with her brilliant images and knowing that her work ethic in researching her subjects was second to none. Among the world’s top ichthyologists she had a reputation for spotting things others missed and for doggedly working to get her species identifications and her scientific facts correct before presenting them to the public.

“She was a constant presence in CORAL Magazine, and her talent and can-do spirit will be painfully missed.”

A full tribute to Denise Nielsen Tackett will appear in the May/June Issue of CORAL.