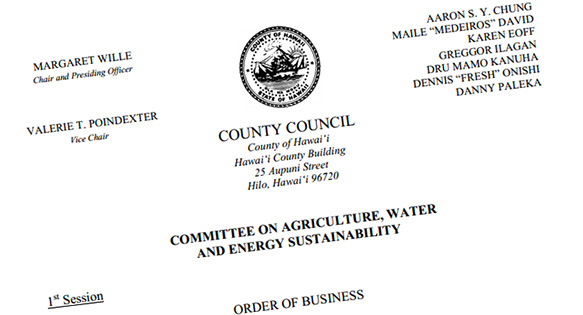 On Tuesday, February 17th, 2015, the Hawaii County Council’s Committee on Agriculture, Water and Energy Sustainability will consider two aquarium fishery related bills: Bills 24 and 318. Aquarium trade experts say the passage of either of these bills could devastate the aquarium fishery and trade in West Hawaii. Close to 70% of the statewide aquarium catch is landed in West Hawaii, making it the largest aquarium fishery in the State.

While advocates of Hawaii County Council Bill 24 say it is a “compromise bill,” critics contend it could make it prohibitively expensive to commercially fish for aquarium fishes in Hawaii County. Likewise, aquarium fishery advocates say, Bill 318 could make it prohibitively expensive to ship aquarium fishes to the mainland or other market countries. In addition, critics worry that passage of Bill 318 could lead to higher mortalities because of a non-science based practices mandated by the Bill. Passage of either bill would only affect the West Hawaii fishery and would not shut down the aquarium fishery statewide.

Both bills are sponsored by Kohala Councilwoman Margaret Wille. The meeting will begin at 1:30 pm HAST at the West Hawaii Civic Center.

Hawaii County Council Bill 318 was first introduced in November 2014, when there was significant public support for the Bill at the public hearing. More than 80 people spoke in favor of the Bill, and just 30 opposed it. The Bill did not move forward at that point, however, because a few of the council members said they needed more time to study the Bill.

Bill 318 is similar to a couple of bills currently under consideration in the State Legislature that would further regulate the aquarium fishery by defining certain common practices as “cruel treatment” (House Bill 883, and Senate Bill 1340) or mandating new holding and transport procedures (SB 670). Specifically, Bill 318:

Establishes provisions for the protection of marine life that is harvested with the intent to sell for aquarium use. Protections include prohibiting withholding food from aquarium life for more than 24 hours, requiring ample water supply when transporting aquarium life, and prohibiting the transport of aquarium life in a manner that is likely to cause injury or death. Any person violating these provisions would be subject to a fine of up to $1,000, imprisonment of up to 30 days, or both.

Many of the practices that would likely be prohibited if the Bill passes are current best practices in the aquarium trade, as well as in aquaculture operations. Provisions in Bill 318 are inconsistent with the best available science and the standards of both the World Organisation for Animal Health (OIE’s) and the United Nations Food and Agriculture Organization (FAO). They are also inconsistent with the UK-based Ornamental Aquatic Trade Association and recommendations published by the United States Department of Agriculture.

Similar bills on the state level have repeatedly failed. In terms of this year’s similar state bills, HB 883 was recently deferred in the State Legislature by the House Committee on Ocean, Marine Resources and Hawaiian Affairs. It is likely HB 883 will be revived this year. Neither SB 1340 nor SB 670 have yet been scheduled for hearings.

Bill 24 would significantly increase the cost associated with working in the aquarium fishery by imposing a county license for aquarium fishing. The provisions in the Bill would apply only to the aquarium fishery despite the fact that the total West Hawaii aquarium reef fish catch is less than half the recreational catch in terms of biomass.

Regulates aquarium life operations by setting forth procedures, terms, and conditions for issuance of licenses. Conditions include a $100 application fee; annual renewals; an annual fee of $2,000 for operations, with an additional $1,000 for certain species; and a report every 180 days to the Finance Director. Any person operating without a license is subject to a fine of $1,000; each violation of one or more conditions of the license will result in a fine of not more than $500 per incident; and failure to file a report will result in a license suspension.

Critics argue that targeting only the aquarium fishery doesn’t make sense, especially since the aquarium fishery is better studied than any of the other fisheries, and the data that consistently shows sustainability. The county-issued aquarium fishing license would be in addition to the state license issued by the Department of Land and Natural Resources (DLNR). The new fees could mean that an aquarium fisher would owe as much as $3,100 per year in licensing fees, a figure many aquarium fishers say is punitive and, in most cases, cost-prohibitive.

Presentations by Experts to Inform Committee

Before the bills are debated, there will be two presentations by experts on either side of the issue. The first presentation will be by Dr. William Walsh, a DLNR aquatic biologist. Dr. Walsh will present on the sustainability of the aquarium fishery in West Hawaii. In previous public testimony, in interviews and in a December report to the State, Dr. Walsh has maintained that the West Hawaii fishery has the data to be managed sustainably. In fact, Dr. Walsh has consistently shown that the data show fisheries management is working in West Hawaii and there are “millions more fish on the reefs” as a result.