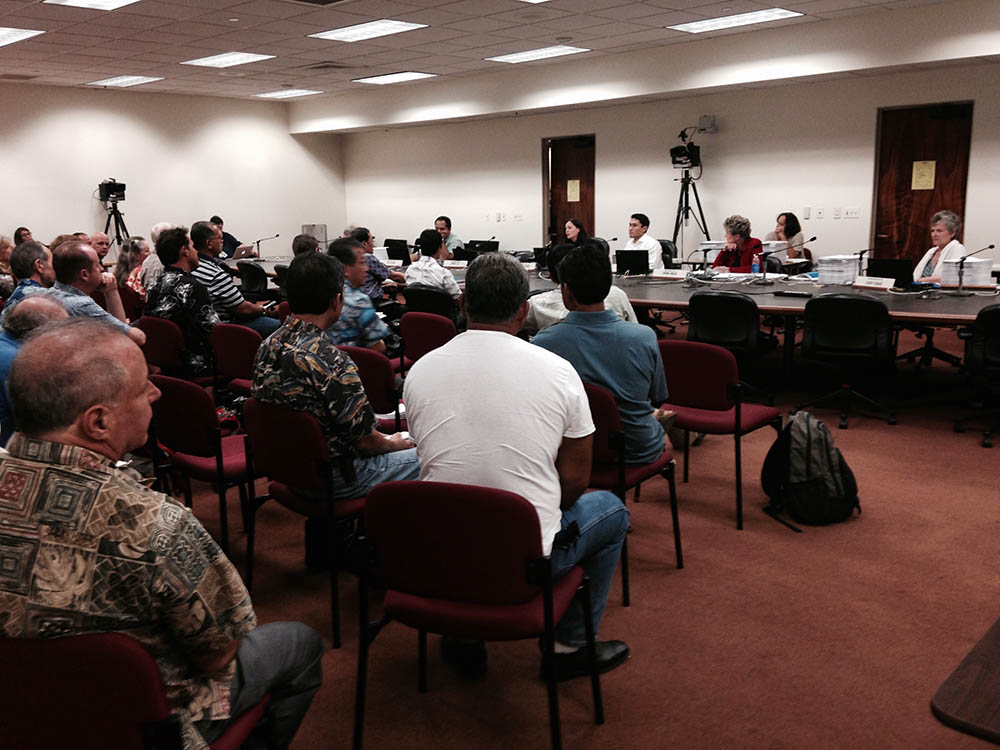 HONOLULU —  Five Hawaii aquarium-fishery related bills were heard in the House Committee on Ocean, Marine Resources and Hawaiian Affairs yesterday, but decisions on all bills were deferred to today, Thursday February 12th.

Testimony regarding all of the House bills related to the aquarium fishery were heard (HB 483, HB 511, HB 606, HB 873 and HB 883). In addition, HB 1478, which establishes the Hawaiian Islands humpback whale national marine sanctuary program and establishes a sanctuary co-manager position, was heard. The hearing began at 8:45 am and concluded at 2:00 pm. The public hearing process provides an opportunity for just about anyone to say anything, so refocusing the discussion on the facts can sometimes be a challenge. According to people in the room, the meeting was a “mixed bag” in this regard, but overall many felt it was more positive than negative insofar as the data and the facts are concerned. Overall, there was a large turn-out for the meeting–estimated at around 70 people–and a tremendous amount of testimony was given on both sides. The Committee will meet again at 11:35 HAST Thursday to vote on the bills.

HB 873, which would close the fishery and which provides a six-paragraph preamble outlining the argument for closing the fishery, attracted the most attention during Wednesday’s public hearing. The Committee Chair said over 1000 pieces of testimony were submitted, with 590 in opposition and 537 in favor.

“I am flabbergasted that this issue has grown to such huge dimensions,” said Dr. Bruce Carlson who was at the hearing giving both personal testimony and testimony on behalf of the Association of Zoos and Aquariums (AZA). Dr. Carlson is the former director of the Waikiki Aquarium on Oahu and the science officer at the Georgia Aquarium. An avid SCUBA diver, Carlson has logged plenty of time on Hawaii’s reef and in the chambers of the State House defending what he contends is a sustainable aquarium fishery.

“In past decades,” Dr. Carlson says, “testimony might amount to a dozen or so on each side. But with PETA, Sea Shepherd, the Humane Society of the US and a dozen other very active organizations out there working hard on their websites to drum up support, it’s no surprise they’ve been able to muster so much testimony. But likewise, the rather loose confederation of people and organizations who oppose shutting down fish collecting have also been able to muster support, and in this case, much more than the opposition.”

The arguments heard on both sides were familiar, with no real surprises. The Humane Society of the United States summed up the opposition saying: “These are ‘our’ public resource, sending them to the mainland is not benefiting Hawaii; it’s destructive; the mortality rate is very high; majority of fish die in weeks.” Opposing the Bill, aquarium fishers and those in support of the fishery argued the State’s own data show the aquarium fishery in Hawaii is a sustainable fishery and that the mortality figures cited by the opposition are incorrect.

Notably, former Chairmen of the Hawaii Department of Land and Natural Resources (DLNR) William Aila gave personal testimony opposing the Bill. Some observers commented that they believe his testimony carried a lot of weight with the Committee members. In his testimony, Aila strongly opposed the Bill, saying that its premise was filled with “lies.” He said no legislation should become enacted on such a basis. Aila went on to address several of the so-called “lies” and studies cited by advocates of the Bill. In addition, he stated that aquaria provide a glimpse of Hawaii’s marine life to people on the mainland and around the world, and he claimed that may actually help bring people to Hawaii. Most important, Aila reiterated what DLNR and every piece of published, peer-reviewed science has found–the data show the Hawaii aquarium fishery is a sustainable fishery.

The Committee members questioned various people, inlcuding representatives from DLNR about the Fishery Replenishment Areas (FRAs), permitting and the question of establishing a limited entry permitting system that would limit the number of aquarium fishermen. Toward the end of discussion regarding HB 873, Alton Miyasaka, an aquatic biologist with DLNR on Oahu, said in response to a question from the Committee that tropical fish collecting in Hawaii is “a very small threat” relative to all threats.

HB 883, which defines several “best practices” in the aquarium fishery as “cruel treatment” that leads to “substantial injury,” is not a new bill. Versions of this bill have come up numerous times over the past several years at both the county and state level. According to several sources who were in the room, Committee members appeared to respond rationally to testimony opposing the Bill. Those supporting the Bill argued that best practices commonly used in the aquarium fishery and trade in Hawaii and elsewhere in the world are tantamount to torture. Opponents of the Bill testified over and over that the practices in question are industry standards and considered best practices throughout the world for wild caught tropical fishes, as well as aquaculture.

The Committee wanted to know how the industry was regulated insofar as these best practices, and Miyasaka replied that the industry was essentially self-regulating. One fisher, who has a long history working in the fishery, explained that those who do not get it right get immediate feedback because their fishes do not arrive at their destination in good condition. In general terms, fishes arriving on the mainland from Hawaii have some of the lowest mortality of any wild-harvested fishes owing to the short supply chain and the care they receive in the supply chain.

HB 511 would make it explicitly illegal to harass a fisher fishing in the ocean in the same way that it is illegal to harass a freshwater fisher. Opposing the Bill, swimmers and snorkelers expressed concerns they could be considered harassing fishers by accident. Aquarium fishers argued that they currently have no protection against those who may want to disrupt fishing by approaching fishers working underwater. The discussion ended up focusing on how the language in the bill could become law or not given the vagaries of what constitutes “harassment.”

By the time the committee got to HB 606, time was running short, as another committee was scheduled to have the room at 2:00 pm. Because the Bill is similar to HB 873 in terms of its effect, the Committee Chair asked for only testimony that added something new to the discussion about the aquarium fishery be presented. According to those in the room, the hearing became somewhat less focused during the discussion regarding HB 606, as people began arriving for the next hearing.

While not much new information was provided on HN 606 at the hearing, there was some discussion on the practicality of closing the aquarium fishery and re-training those formerly employed in the trade. HB 606 would provide assistance, training, and related employment services to workers dislocated by a moratorium on the aquarium fishery.

The House Committee on Ocean, Marine Resources and Hawaiian Affairs will meet again today (Thursday 12 February) at 11:35 a.m. HAST to make decisions. At that time, they can pass a bill as is or with changes out of committee, and that bill will then continue on its way through the legislative process (it’s worth noting that a bill can be amended to something that’s very different from its original form while in committee). Alternatively, the Committee can choose not pass the Bill out of committee, and the Bill may see no more activity until it is reintroduced automatically in 2016 (the Hawaii Legislature runs on a two-year term that begins in an odd-numbered year and ends in an even-numbered year). As this is a decision-making meeting only, no public testimony will be accepted.