A Look At The Giesemann Futura LED Aquarium Lighting Systems 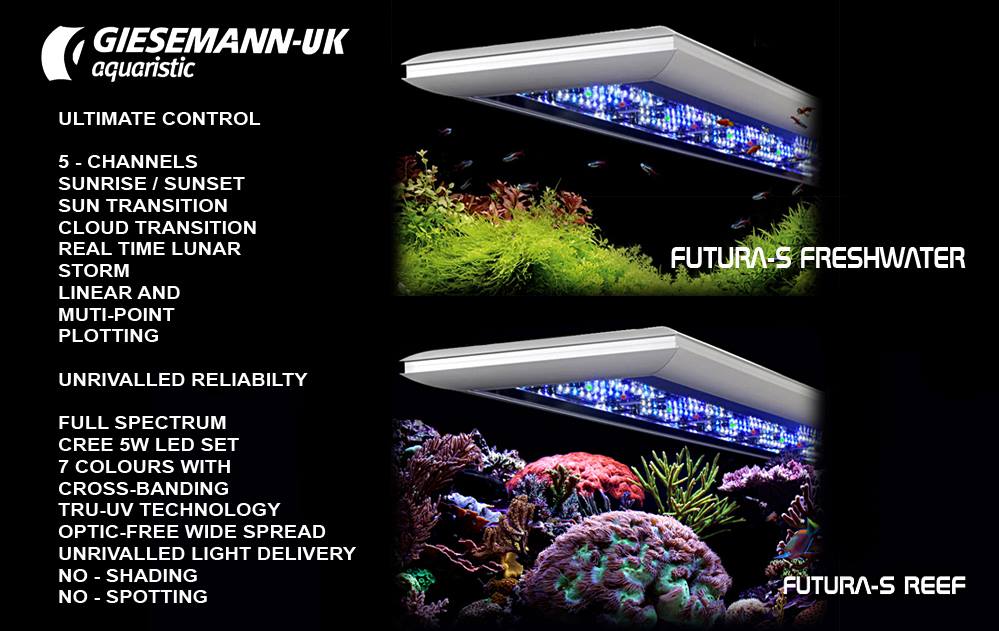 Trusted by hobbyists the world over and chosen by leading researchers for its unique capacity to replicate natural lighting scenarios and rendition, every FUTURA light unit is fitted with high-power LED boards that communicate with one another via an internal radio link. The lamp array is which offers unrivalled coverage for wattage consumed is controlled via Bluetooth from your home PC, smartphone or tablet computer. The individual light modules, consist  of 20 x new generation high-power 5w CREE X-Gen LED’s in a special configuration for freshwater planted aquaria, or  TRU-UV sub 400nm emitters for marine reef aquariua, which communicate via a secured Bluetooth radio link. All colour mixes, dimming phases and lighting scenarios, including storm, cloud and lunar phases, can be simulated using the standard software. Unique to the FUTURA is the ability to adjust levels on a ‘per-module’ basis, meaning that different light saturation levels or even whole lighting scenarios may be programmed for different areas within the same aquarium dependent on the stock requirements, including ‘SUN TRANSITION’ where a moving sun effect can be simulated across the entire aquarium to induce more natural behaviour in livestock and to help prevent excessive over exposure in sensitive photosynthetic plants and corals.

Even with a formidable specification list combined with Giesemann’s incredible reputation for reliability, FUTURA still represents one of the most cost effective ways of lighting any tank larger than a 2×2 with LED, and is especially applicable for tanks with a wider front to back dimension that would normally require double banking due to its 120deg wide beam output.

A typical comparison would be a standard 4 x 2 x 2 aquarium which would normally require 2-3 modules of other leading brands, with an average outlay of around £1500-£1700 including all applicable mounts and control systems, whilst the comparable Futura-S4 with 4 LED boards for more even light distribution would cost a very a competitive £1639.00 Including delivery and without all those annoying cables and router connections to worry about..

So, if you are looking for a new lighting system for your reef or freshwater system, then look no further because the FUTURA is now firmly within your grasp.

Giesemann products are distributed in the US by CoralVue.