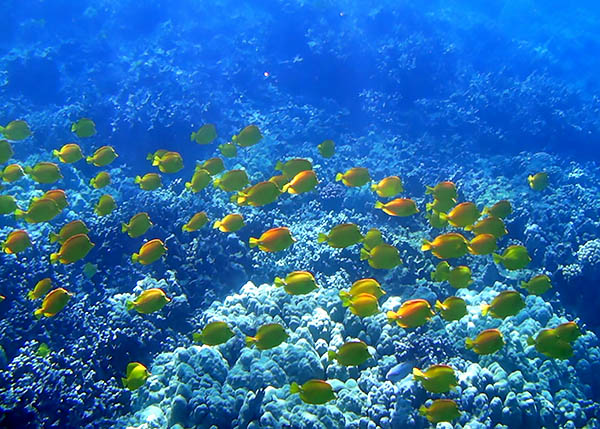 A school of Yellow Tangs, one of fishes at the center of ongoing debates over Hawaii’s Aquarium Fishery, gliding over the reefs of Honaunau Bay. Image by Pat McGrath | CC-BY-2.0

With just a few days left to introduce new bills for consideration in the 2015 Hawaii Legislature, those on both sides of the aquarium fishery debate are getting a sense of what this legislative session will look like. There are currently six aquarium fishery-related bills, two of which are, as of this writing, still pending introduction. Of the six bills, two (SB 322 and SB 670) have been introduced in the Senate, and the rest (HB 511, HB 606, HB 883 and HB 873) have either been introduced in the House or are pending introduction.

The four bills that have been introduced, have been referred to one or more of the following committees:

The referrals are as follows:

First Round of Legislative Deadlines after Introduction

Thursday (29 January) is the cutoff date for new bills to be introduced. Once a bill is introduced, it is referred to one or more committees. If it is referred to multiple committees, as is the case with all aquarium fishery bills introduced so far this year, the first committee to which the bill is referred is considered the lead committee. A joint referral is indicated by a slash (“/”), as can be seen with SB 670’s joint referral to the Senate Committee on Transportation and the Senate Committee on Agriculture (TRA/AGL). The last committee to which a bill is filed is called the final committee.

Once a bill has been referred to committee, the next step is for a public hearing to be scheduled for the bill. As soon as a bill is referred, public comment may begin. At this point in the process, it is most appropriate to send a letter or email to the committee chair either supporting or opposing a bill. Such early comment may influence whether or not a bill actually gets heard, so writing to the committee chair is advisable, as it is the chair who schedules bills for hearings. The public may, however, also write to individual committee members.

Once a bill is scheduled for a hearing, a public notice will go out. Once the public notice of a hearing goes out, the public may submit written or electronic testimony either supporting or opposing the bill. Detailed instructions for submitting testimony will be included in the hearing notice. There is a “Submit Testimony” link available for each bill, or the public can use the committee email address. For individuals who can be present in person at the hearing, oral testimony may be presented in some committees. A written testimony outline and a sample of written testimony are available from the Hawaii State Legislature website.