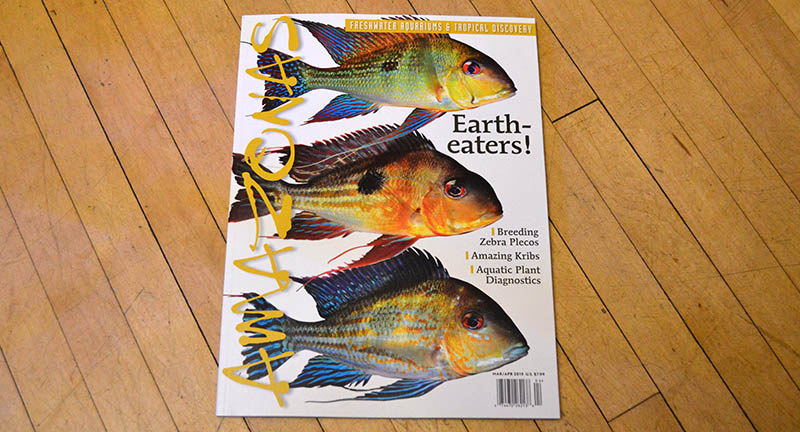 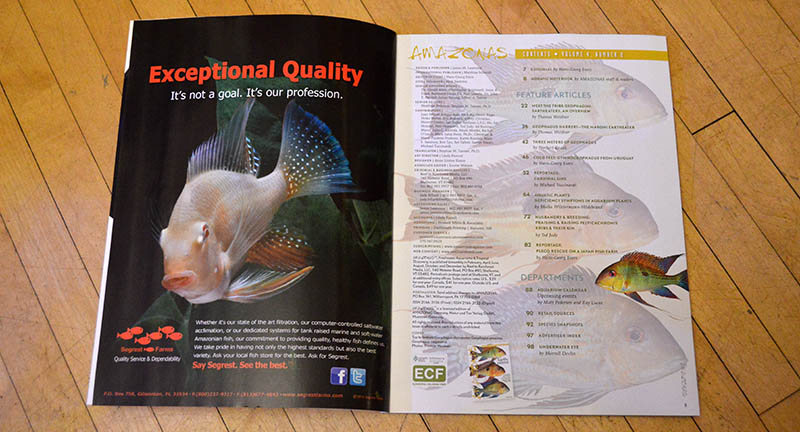 The table of contents for the March / April 2015 issue of AMAZONAS Magazine. 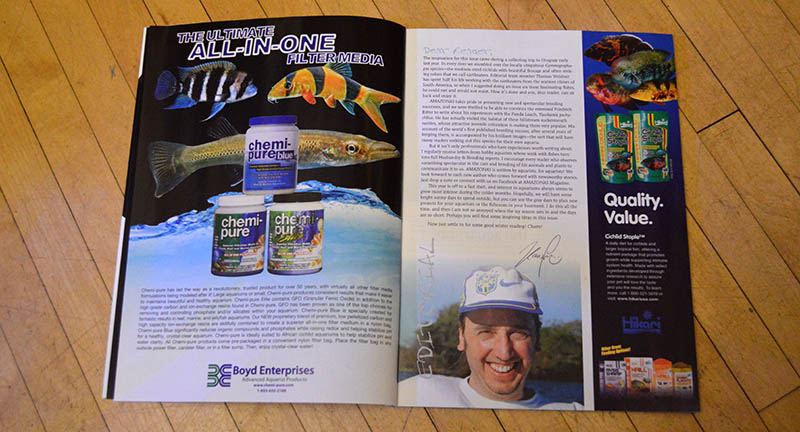 Our editorial letter from Hans-Georg Evers, Editor-in-Chief of AMAZONAS Magazine. 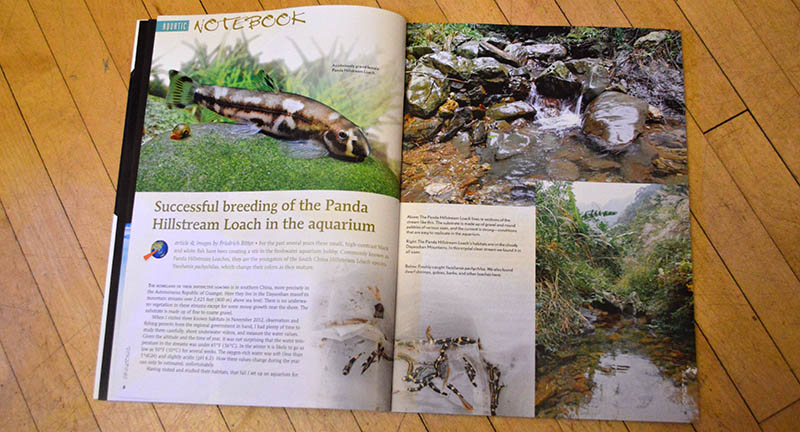 “Successful breeding of the Panda Hillstream Loach in the aquarium” – you read that right! Friedrich Bitter tells the tale! 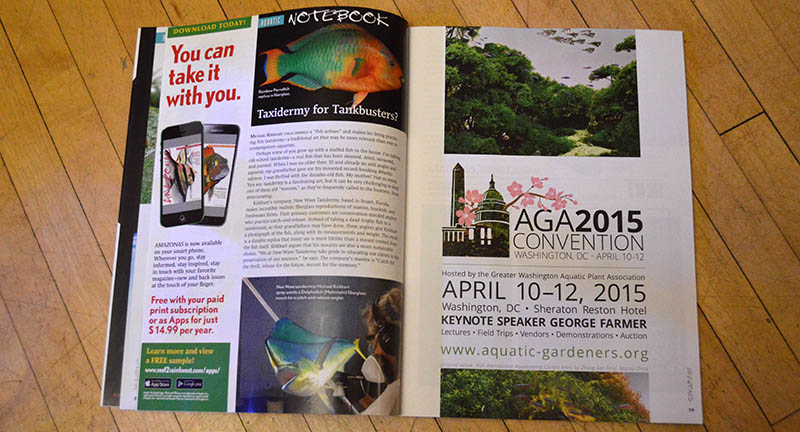 “Taxidermy for Tankbusters?” Ret Talbot, a Sr. Editor and regular contributor for our sister marine aquarium publication CORAL Magazine, considers that maybe there’s an better alternate out there to keeping oversized fish in aquariums. 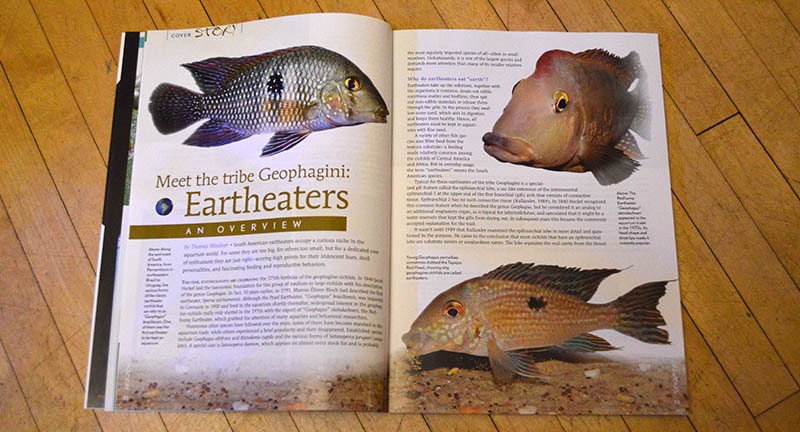 “Meet the tribe Geophagini: Eartheaters, An Overview”, by Thomas Weidner, is the first of several cover feature articles in this issue. 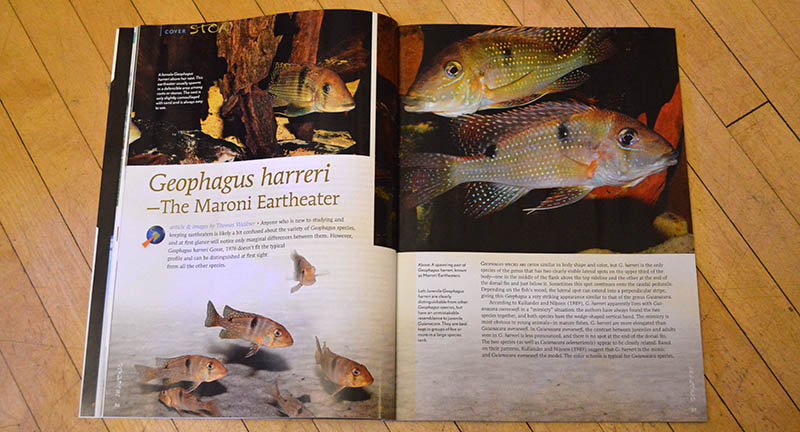 “Geophagus harreri – The Maroni Eartheater”, by Thomas Weidner, takes a look at one of the lesser known Geophagus spp. 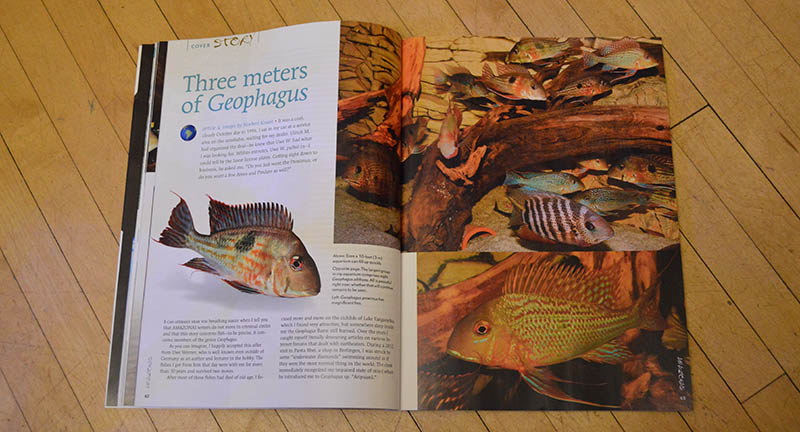 “Three meters of Geophagus”, by Norbert Knaak, looks at keeping a community of mainly Geophagus spp. in a 10 foot long aquarium. 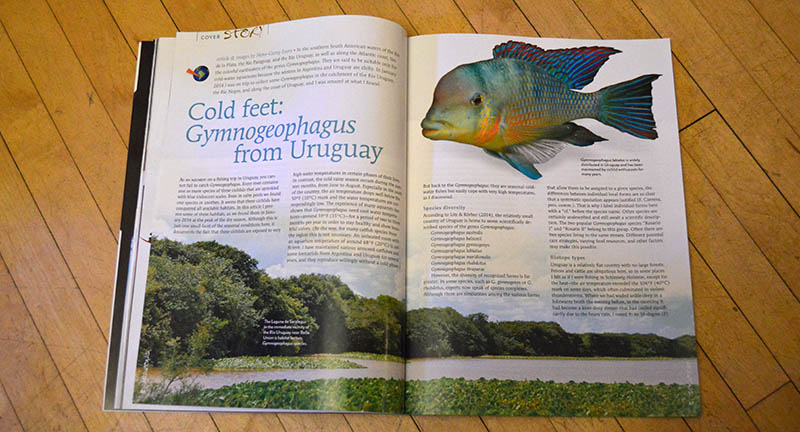 “Cold Feet: Gymnogeophagus from Uruguay”, by Hans-Georg Evers, presents wild Eartheaters in a fish collecting expedition to the Rio Negro and Rio Uruguay basins, aong with coastal areas of Uruguay. 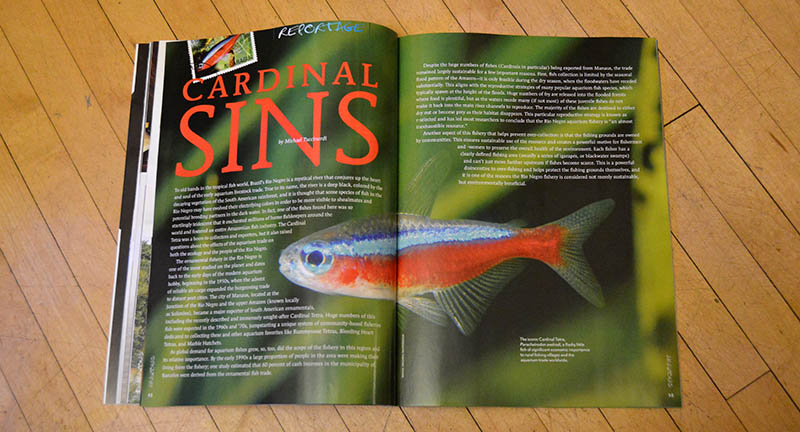 It often seems that as conservation-minded aquarists, we presume that captive-bred, farmed fishes are preferential to wild-caught fishes in every way. Captive propagation removes the impact of wild-harvest on wild places and wild fishes. But that logic assumes that the impact of wild fish collection can only be negative. Mike Tuccinardi looks at the Rio Negro fishery for wild Cardinal Tetras in his article “Cardinal Sins”, and explains that the cost of the trade shifting to farmed Cardinal Tetras may be the loss of a sustainable fishery and the environmental protections it creates and maintains. If the trade is lost, speculation suggests it could be replaced with much more destructive forms of subsistence. 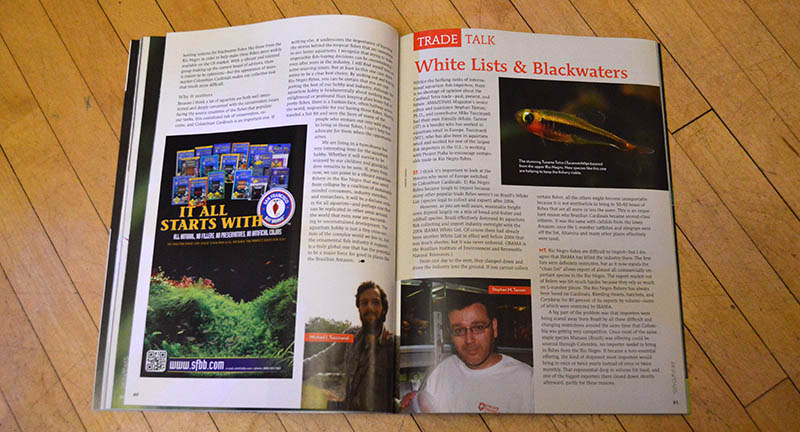 “White Lists & Blackwaters” features a friendly and candid debate between AMAZONAS Translator and Sr. Editor Stephan Tanner, Ph.D., and contributor Mike Tuccinardi, covering the past, present and future of the Cardinal Tetra Trade. 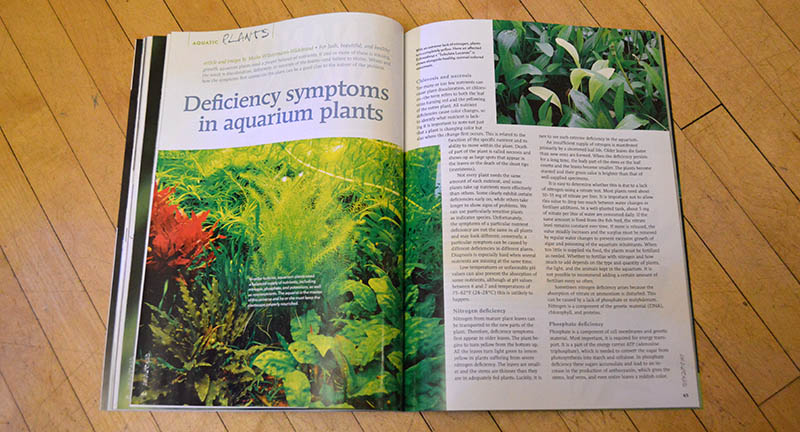 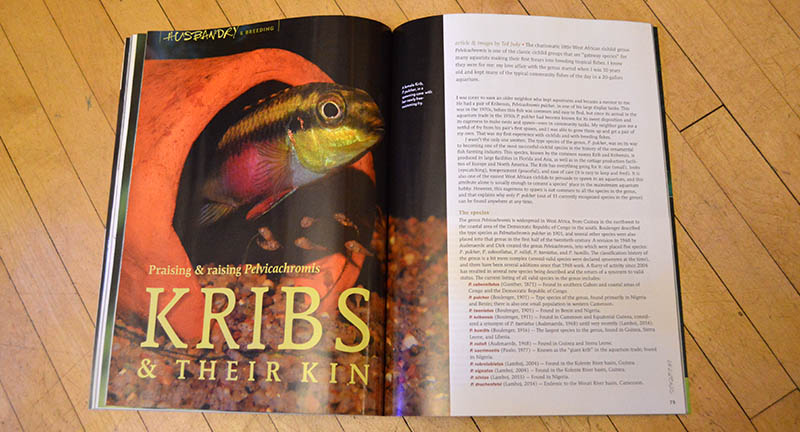 Who hasn’t kept a “Krib” at one time or another? Ted Judy brings us “Kribs & Their Kin: Praising & raising Pelvicachromis” – an all encompassing and detailed review of this very popular genus of dwarf cichlids. 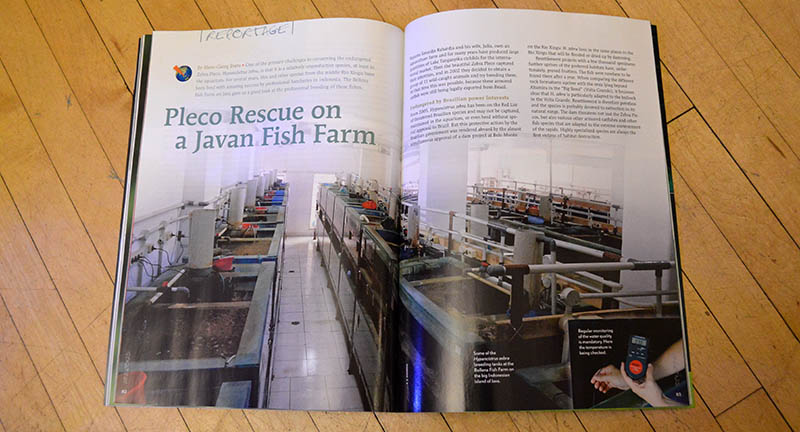 “Pleco Rescue on a Javan Fish Farm”, by Hans-Georg Evers, looks at the professional, commercial breeding of the Zebra Pleco, Hypancistrus zebra, on the Bellenz Fish Farm. We know you want the black & white eye candy, including images of “xanthoristic” and “fine lined” morphs that could lead to new Zebra Pleco strains in the future, but you’ll have to get your hands on a print or digital edition to see those pages! 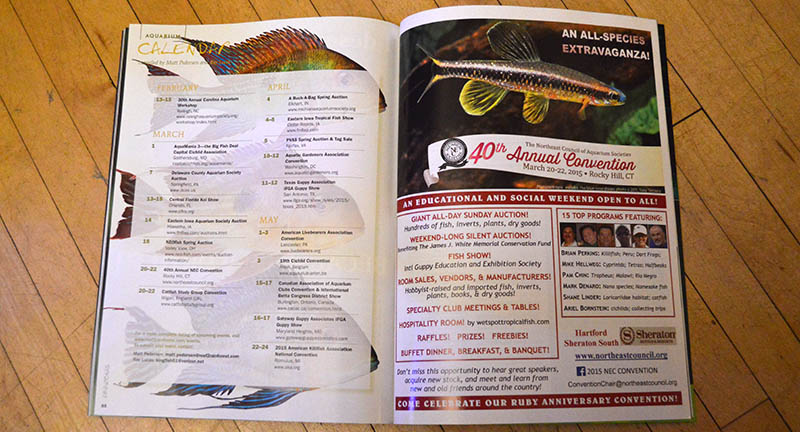 Another AMAZONAS Events Calendar will point you to all the upcoming special aquarium events around the US, Canada, and beyond. 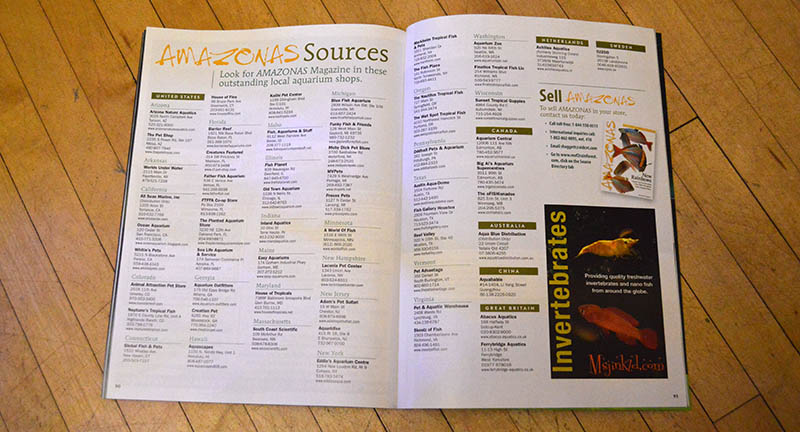 AMAZONAS Sources lists many fine retailers and distributors where you can obtain single-issue print sales of our magazine. 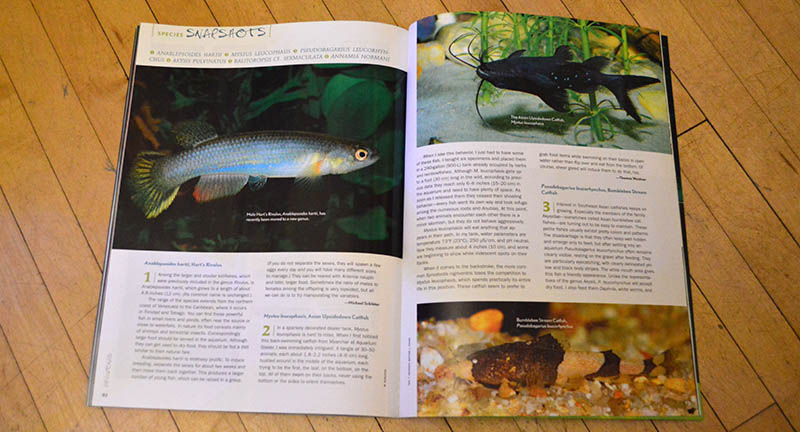 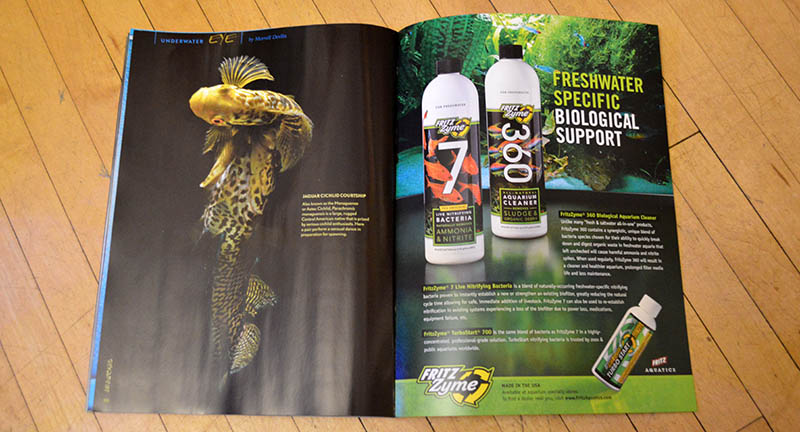