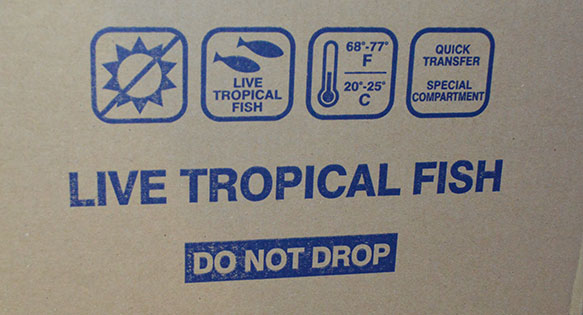 Proposed new bill could impact current shipping practices for aquarium fish, and may result in increased stress and mortality.

In addition to the three aquarium fishery-specific bills introduced or pending introduction in the Hawaii legislature (HB 511, HB 606 and SB 322), Senate Bill 670 could significantly affect the aquarium trade in Hawaii according to trade experts. SB 670 would amend the Hawaii Revised Statutes by establishing food, water, cargo hold temperature, cargo transfer, and certification requirements for air transport of live animals, including fishes. The bill was introduced by Senators Will Espero and Lorraine Inouye, and, if it passes, would take effect upon its approval.

Insofar as the trade in live aquarium fishes is concerned, SB 670 mandates that “[f]ood and water shall be given to coldblooded animals within eight hours of delivery to the carrier…unless otherwise required by law or specified by International Air Transport Association regulations.” In accordance with the new law, a “feeding or watering certification” will document the date and time of the last feeding and confirm compliance.

In addition, SB 670 would require the cargo holding area for live animals be kept at or below eighty-five degrees Fahrenheit. Finally, the Bill would require the carrier to transfer any animal from the cargo hold of the aircraft to either 1) Department of Agriculture airport office (trans-Pacific arrivals) or 2) the baggage claim areas (inter-island arrivals) within twenty minutes of the plane being “stopped and chocked” (i.e., “blocked-in”).

Aquarium trade exporters and others with trade-specific knowledge argue that feeding fishes just prior to departure is “not an accepted practice and results in considerable hardship and mortality for fishes being transported.” Some even argue that the Bill, if passed, would “force the use of cruel and inhumane practices when transporting fish that would, in turn, cause massive mortality rates during shipment.” The best available, peer-reviewed science does not support SB 670, nor does the Food and Agriculture Organization (FAO) of the United Nations’ in their technical paper “The Transport of Live Fish.”

Ammonia (NH3) builds up in transport water due to protein metabolism of the fish and bacterial action on the waste. Decreasing metabolic rate of the fish by lowering the water temperature, and thus lessening fish activity, reduces the production of NH3. The production of NH3 by bacterial action can be decreased by shipping fish only after food has been witheld long enough to void the stomach and intestine. Temperature and time of last feeding are important factors regulating ammonia excretion. For example, trout held in water at 1°C excrete 66% less ammonia than those held in 11°C water, and fish starved for 63 h before shipment produce half as much ammonia as recently fed fish. Fish larger than 10 cm should be starved at least 48 h; those 20 cm and larger should be starved 72 h (Piper et al., 1982).

Aquarium trade exporters in Hawaii argue that, in addition to the food requirements, the temperature and time requirements are unnecessary for aquarium shipments because the fishes are already packed in insulated boxes with cold packs designed to maintain temperature throughout the entire shipping process. Some critics of the bill also point out that adopting such a law could cause airlines to embargo all live animals too and from Hawaii and may run amuck of federal law under the Federal Aviation Act.

The bill would also affect other animals besides fishes and includes specific provisions for birds.

It should be noted that SB 670 is very similar (if not identical) to 2013 HB 1145 introduced two years ago in the House by Representatives Chris Lee, Faye Hanohano, Aaron Johanson, Scott Nishimoto and Clift Tsuji. HB 1145 was amended several times in 2013 and then carried over to the 2014 regular session where it died when it failed to make it out of committee.

There are now four bills that have either been introduced or are pending introduction in the Hawaii Legislature. After being introduced, these bills (and any additional bills introduced before the deadline of 29 January) will be referred to committee. At that time, public testimony may be appropriate. Stay tuned to The Good Catch Blog and The Good Catch Blog Facebook page, as well as to CORAL Magazine for the latest on these bills affecting the Hawaii aquarium trade.