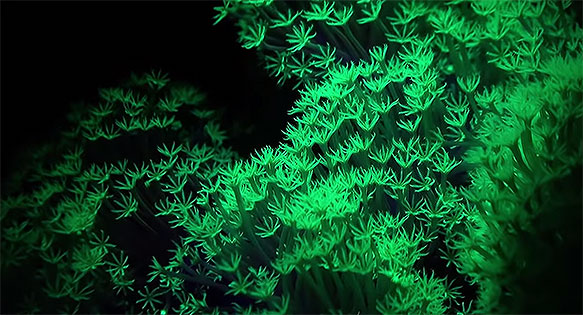 A snapshot from The Glowing Corals of the Dark – Koh Tao – a film by Vanessa Cara Kerr.

CORAL Magazine fan Vanessa Cara Kerr recently shared with us some incredible underwater footage in her film The Glowing Corals of the Dark. The film, filmed on location under the waters of Koh Tao, Thailand, demonstrate firsthand a growing scuba diving phenomenon; UV, Fluo, Fluoro or Fluorescent night diving. Marine aquarists are already quite familiar with the vivid glowing colors seen in a reef tank illuminated solely by actinic-type lighting, but the dive community has latched on in a wholly new way.  As described by Florida-based Keys Diver, “We dive with special lights that are specifically designed and tested to generate the maximum amount of bio-fluorescence, and with specially designed visors to filter out the blue.”

Frankfurt-based Kerr, a photography and videography hobbyist, took up diving in 2013 and planned to spend time doing UV-dives during her 2014 trip to Thailand. She combined her passion for imagery and diving by locating a dive shop that not only did fluo-night dives, but also rented and trained divers on underwater film equipment that could be used to capture the unique fluorescence seen on the reef during these dives. 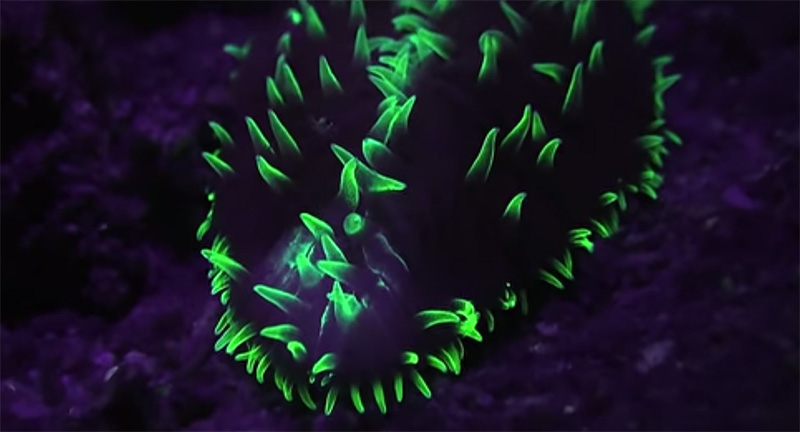 The video you are about to see was compiled from 5 separate dives; up until this time Kerr had only logged 20 dives in her still fledging dive hobby.  As Kerr tells it, “I filmed during night time, and was more or less lying or kneeling flat on the sandbed inbetween the reef free spots. [It] wasn’t that safe though, there are very many stonefish! But luckily nothing happened. [The] fact that you see nothing at all except the blue light beam of the torches, was interesting as well. In other nightdives you always saw more than the beam, but because [you have a yellow visor on it] really took all you sight away! But as soon as you point the light at the corals, the magic begins and you forget the rest of the world…”

Before we go any further, perhaps you should watch Kerr’s short film now.

One of the most astounding aspects of this video, aside from the obvious in-your-face beauty of these nightime dives, is the truly overwhelming amount of planktonic life captured around these corals. At one point, is appears as if a Fungia coral is simply hoovering up every living organism foolish enough to be nearby. 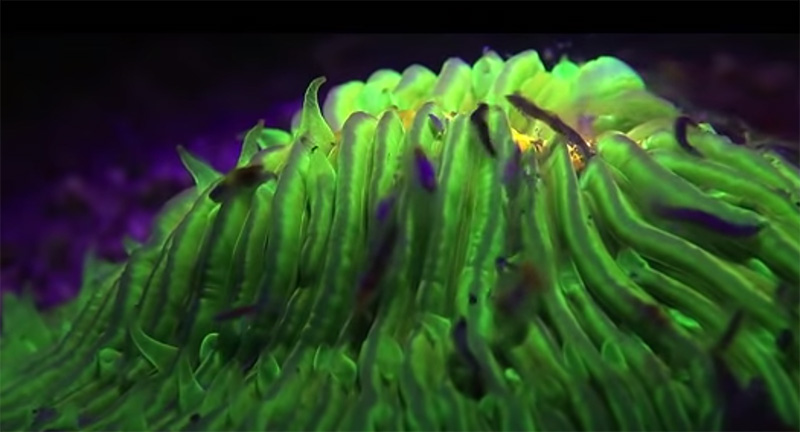 What appears to be a Fungia sp. coral, sucking up all sorts of living zooplankton during the middle of the night.

Perhaps this footage should serve as a reminder of how rich and productive a natural reef really is – perhaps feeding our corals is even more important than we think.

For Kerr, the impact was more fundamental. “My first Ultraviolet/Fluo Dive was one of the most beautiful things I have ever seen and I fell in love…now I want a reef aquarium at home!!!”

We hope you enjoy Kerr’s award winning film, and we’re excited to say Kerr has a great eye in the daytime as well.  We’ll bring you another video or two from her in the coming weeks!