Pellets and Powders – An Overview of Coral Feeding 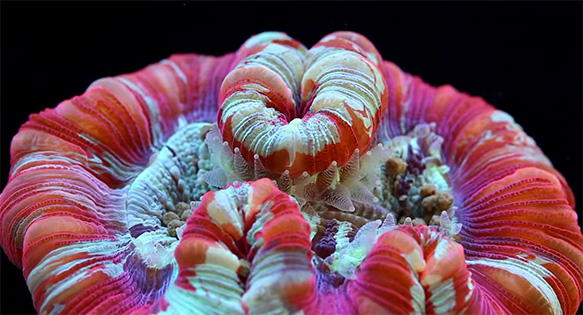 Coral feeding is a practice we adopted long ago at Tidal Gardens. Corals that are fed consistently have dramatically improved coloration and display much better growth and polyp extension. We constantly experiment with different foods for feeding corals whether they be frozen foods or dry meal. This blog is all about the reactions of different corals to some of the popular powder and pellet foods.

Some coral are not as receptive to feeding as others. Large polyp corals such as Acanthastrea and Scolymia pretty much will eat anything offered. Unfortunately, other corals such as Goniopora and Zoanthids are not as cooperative. It is for the sake of these finicky corals that we experiment with an assortment of foods. There is little point in considering the best formulated food if the corals refuse to eat it. We put together a few videos showing coral feeding responses to dry foods from companies such as Fauna Marin, Polyp Lab, Coral Frenzy, and Sustainable Aquatics.

Fauna Marin
When it comes to dry coral foods, Fauna Marin probably is the most well known brand. Fauna Marin is a German brand with a very good reputation in the reef aquarium hobby. We took a look at two of their foods, the LPS pellet and the Zoanthid and Ricordea powder. First, the LPS pellets.

Of all of Fauna Marin’s foods, easily the most popular is their LPS pellets. The LPS pellets are designed to sink so they are less likely to blow away from the coral. Still, it is recommended to turn down the flow to make it easier for the corals to grab onto the food. Unlike a lot of other dry foods, they have an almost oily consistency when wet. In the video above, you can see how wide ranges of corals eat it hungrily. The Fauna Marin LPS food comes highly recommended for feeding non-photosynthetic LPS such as Tubastrea and Dendrophyllia.

Next, we looked at their Ricordea and Zoanthid food. This blend comes in the form of a powder and requires supplementation of a liquid product Ultramin D to initiate feeding. Fauna Marin sells several types of liquid additives to supplement their dry foods. At this time, we have not had the opportunity to test them all, but seeing the affect of Ultramin D on the Ricordea and Zoanthid powder it makes me wonder if it is something that would benefit all types of food.

In additon to their Ricordea and Zoanthid food, Fauna Marin also makes different powders for Gorgonians and other filter feeding corals. The difference besides the actual food composition of the powder is the weight of the particles. For Gorgonians and other filter feeders, the powder is designed to remain in suspension for long periods of time to allow for extended feeding opportunities. In contrast, the Zoa and Ricordea powders are designed to sink.

Polyp Lab makes a powder called Reef Roids. It is a blend of several types of marine plankton. This product is aimed squarely at filter feeding corals however, we chose to try it with a variety of corals ranging from LPS to non-photosynthetic filter feeders.

It came as no surprise that many of the large polyp stony corals ate the food. The powder sticks to the mucus coat of the corals. It is then consumed by the coral by sucking in their mucus coat. Zoanthids and Palythoa were hit or miss depending on the variety. Some did appear to close around the food, which is always a bright sign. The most interesting result was the non-photosynthetic Dendronephthya that appeared to eat Reef Roids. Carnation corals are one of the most difficult corals to keep and providing anything that they will consume is a big deal.

Coral Frenzy
Next, we take a look at Coral Frenzy, a type of pellet food.

Like most fish pellet foods, Coral Frenzy has various seafood-based ingredients but also contains vegetable matter from both the sea and land. The LPS food contains spirulina from the ocean but plenty of terrestrial vegetables such as garlic and various wheat products that presumably act as a binder. It is unknown whether other brands do this because labeling of fish and coral foods is limited. Coral Frenzy deserves some credit for printing an extensive list of ingredients on their label.

Overall, our experience with the food was positive. Many of the easier to feed LPS such as Acanthophyllias, Acanthastreas, Blastomussas, and Scolymias ate Coral Frenzy LPS right away. The more finicky LPS like hammers, torches, and frogspawn had a tepid response to the food. Some of the stony corals with smaller polyps like Cyphastrea did not appear to make any effort to grab and consume the food.

Sustainable Aquatics is a company that is very active in fish breeding and this Hatchery Diet is their go-to staple for raising fry. On the surface it may seem odd that we included a fish food in a coral food comparison. Hatchery Diet was included because we noticed that it was readily consumed by some fish that were notoriously difficult to feed such as file fish. We tried feeding a wide range of corals starting with ones that eat readily and progressed to more challenging corals.

The Sustainable Aquatics food performed very well in our opinion. Just about every type of coral ate it with the exception of Zoanthids that don’t seem to like anything. Particularly impressive was that both Euphyllia and Goniopora consumed it.

Conclusion
In summary, there are a variety of dry foods available to feed corals and depending on what you are keeping, some may work better than others. Here at Tidal Gardens, we employ a bit of a shotgun approach to feeding. We make a mix of several of these dry food products along with some frozen food blends to make a seafood gumbo.

I could not tell you exactly which one ingredient is the magic, but the combination is working well for us so far. Do you have a favorite food or blend of foods?