Geographic Variants Within the 30 Current Species of Clownfishes – Introduction

The concept of a species has long been one of debate, and the ways that scientists define and distinguish species are more varied than ever. Long-time aquarists are probably able to self-identify as being a “Lumper” or a “Splitter”, these terms alluding to beliefs that there are either too many distinct species already described, vs. the belief that too many dissimilar forms are all lumped together at this time.

“Species” is a man-made construct and thus, inherently flawed in my opinion. However, the system of taxonomy is designed to always self-improve, which is why taxonomy is constantly changing. What wasn’t a species last year might be elevated to “specieshood” this year, only to perhaps be stripped of such recognition a decade later. Or not.

Dr. Luiz Rocha frames the concept of species in a way that highlights the true importance of this seemingly imperfect, always changing framework, in the modern world. “The species is the base unit of conservation”, states Rocha. With that one single assertion, Rocha has pointed us to the rulebook and shared the framework within which governments will decide what biodiversity can be sacrificed in the name of progress, and what must be saved in the name of conservation. For those who believe that more natural biodiversity equates to a better, healthier world, sentiment’s like Rocha’s fueled an entirely new generation of “splitters”.

ORA has taken the initiative to produce not only the commonly seen brown form of Saddleback Clownfish (A. polymnus) but also the Black Form (left), most often cited as hailing from Cebu; this Black form of Saddleback has been exported from the Philippines as “Black Percula” for years, which continues to this day. Images by ORA

Australian Kylie Waldon compiled one of the most definitive looks at clownfish variations in the wild that I have ever seen, starting with work in the late 1990s. Her website, Anemonefishes In The Wild, was online from at least 2002, through 2007. I downloaded and saved it locally before its disappearance, but discovered that it is still accessible today through the internet archive, Archive.org.

At its peak, Waldon’s website claimed to show over 100 unique variations of wild clownfishes. 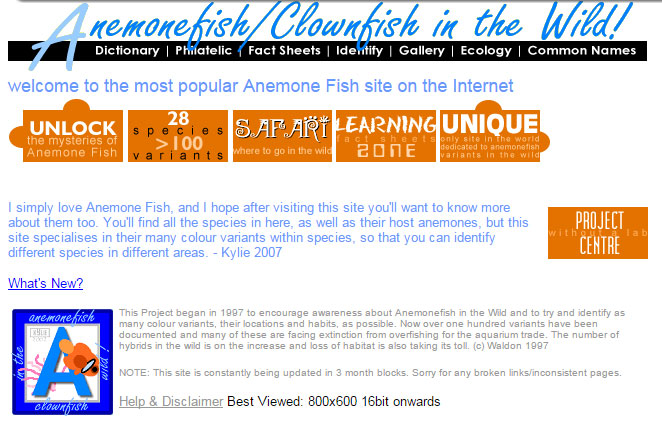 Kylie Waldon’s homepage, saved from extinction via Archive.org. Note her commentary: This Project began in 1997 to encourage awareness about Anemonefish in the Wild and to try and identify as many colour variants, their locations and habits, as possible. Now over one hundred variants have been documented and many of these are facing extinction from overfishing for the aquarium trade. The number of hybrids in the wild is on the increase and loss of habitat is also taking its toll. (c) Waldon 1997

Waldon was, and perhaps still is, a staunch critic of the aquarium hobby, having proclaimed as early as 2004, “I won’t assist aquarium sites in any way. Too many anemonefish are taken straight from the wild in the “sustainable” greed to have pretty fish in a tank. A. ocellaris is on the brink of extinction because of this, and other variants are already proving to be almost lost in just that short span of years from 1997 to now.”

Despite Waldon’s harsh criticism and perhaps completely overblown concerns over the status of A. ocellaris, it may well be that Waldon’s work gave me the first real look at the geographic diversity that exists within clownfish, and as a result, proved that not all clownfish under a given name are the same. By simply making her information available, and that information now being preserved by Archive.org, she perhaps has unwillingly helped aquarists like myself develop a deeper appreciation of, and concern for, the many natural biogeographic variants of Clownfishes that before now were simply overlooked.

Some years later, the Internet’s information base having grown exponentially, Yuri Machado de Barros, a clownfish enthusiast from São Paulo, Brazil, started posting a series of commentaries on the various biogeographical variations of clownfish species, primarily referencing dive photos and videos from around the globe, in any language. This information, published initially on the now defunct website RareClownfish.com, was lost with the closure of the website; only bits and pieces of it remain saved in Archive.org and the all important images are not retained. However, Barros retained his information and is slowly recompiling and posting it in new public venues, as well as a complete private repository which he shared with me in preparation for this article.

Aquarist and researcher Ross DeAngelis recently quipped, “I am somewhat familiar with the [geographic] variants [of clownfish], but not like Yuri [Barros], he is the clownfish encyclopedia as far as biogeography goes.” Indeed, while not a credentialed expert in the field of clownfish taxonomy, Barros is a classic example of something that “academics” and “experts” tend to overlook – they are not the only ones who “know” what they’re talking about. Good ideas can come from anywhere, and data speaks for itself.

I find it particularly compelling that I had looked at some papers, conducted an exhaustive search of online dive photography, considered Waldon’s data points, and found immensely compelling geographic patterns that suggest at least one new species of clownfish hiding in plain site.

After sharing that information with Dr. Rocha, less than 24 hours later, after years of trying, I finally managed to reconnect with Barros, and his observations, made in complete isolation from my own, mirrored my observations in many respects. Barros has been quietly toiling away, simply investigating his own passion for clownfishes, from a desk in Brazil, combing over endless mountains of geographically-linked dive photos of clownfish in the wild; it almost goes without saying that when you amass all that data, and apply it against the known biogeographic barries that help drive speciation in the Indo-Pacific, interesting discoveries are going to be made.

The simple result is that not all clownfish currently labeled as species X will stay that way. There is an astonishingly large amount of diversity of form, color, and shape that largely goes unknown simply because the information has never been made available.

It is because of these geographic variations, and the fluidity of taxonomy, that obtaining fishes with known provenance is of the highest importance for anyone planning on breeding clownfishes. In other words, know where your fishes come from and keep a record of it. If you know you have a Whitetailed Cinnamon Clownfish from the Solomon Islands, it won’t matter if we call it Amphiprion melanopus today and A. frenatus tomorrow, because regardless of the name, that unique form is quite possibly found nowhere else. More on that in another section.

The Geographic Variants of 30 Species of Clownfish

What follows is survey the known, and presumed known, variations that occur within the current anemonefish species and complexes as they are structured and accepted today.For the most part I’ve restricted this list specifically to geographic variations; space and time precludes in-depth discussion of other forms of variation such as sexual dichromatism. I am also going to refrain from extensive discussion of host-driven melanism and other coloration peculiarities which may be attributable to social structure or the environment.

Continue to the next segment – Maroons, Ocellaris & Percula Clownfish Variants