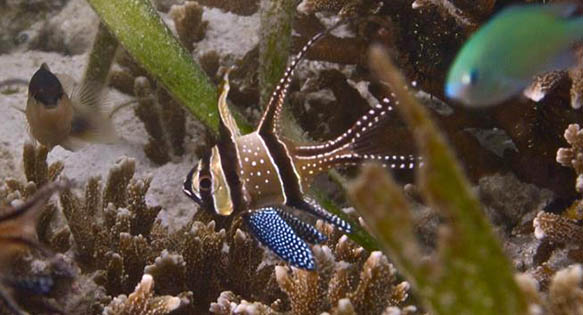 Things may be about to change for the Banggai Cardinalfish in the US.

The National Marine Fisheries Service (NMFS) is set to publish a proposed rule to list the Banggai Cardinalfish (Pterapogon kauderni) under the Endangered Species Act (ESA) as early as today [12/16/2014].

This news comes upon the completion of an extended status review by NMFS based on a summer 2013 WildEarth Guardians petition to list the species, along with 80 other marine species, under the ESA.

Under the proposed rule, the Banggai Cardinalfish would be listed as “threatened,” meaning there would likely be no immediate changes to trade or commercial activities as a result of the listing. At some point after the species is listed, however, NMFS would probably initiate a rulemaking process under section 4(d) of the ESA.

Black Eye for Aquarium Trade
These so-called 4(d) rules could limit or ban any and all trade in the species, including aquacultured specimens. The final rule should be published within a year, although NMFS does have some latitude to extend the deadline for an additional six months if there is substantial disagreement regarding either the sufficiency or accuracy of the data.

If the Banggai Cardinalfish is listed as threatened under the ESA, it will be the first aquarium species for which the trade bears significant responsibility. In its status review, NMFS found that both habitat destruction and over-utilization for commercial purposes (e.g., the aquarium trade) are the major threats to the species. In the case of most of the other aquarium species listed (or being considered for listing) under the ESA, climate change is considered the primary threat, while extinction risk due to the aquarium trade is considered low.

Signs of Falling Demand for Wild Catch
While NMFS implicates the aquarium trade for more than a decade of unsustainable fishing practices leading to the decline of wild populations, they also note that, in the last few years, fishing pressure has remained static or even decreased.

During this time, NMFS is specifically seeking comment “[t]o ensure that any final action resulting from this proposed rule…will be as accurate and effective as possible.” Any final regulations regarding the listing of the Banggai Cardinalfish will “take into consideration the comments and any additional information.” As a result of the public comment period and additional review, the final rule may differ from the proposed rule or the proposed rule may be withdrawn.

The 40-page Banggai Cardinalfish status review report is a comprehensive, peer-reviewed report based on the best available science at the time of consideration. Individuals who want to submit comment should make themselves familiar with this document before submitting comments. CORAL Magazine will publish all the relevant links and instructions once the proposed rule is published in the Federal Register. Stay tuned for more analysis of this proposed rule and all other ESA-marine aquarium related actions.