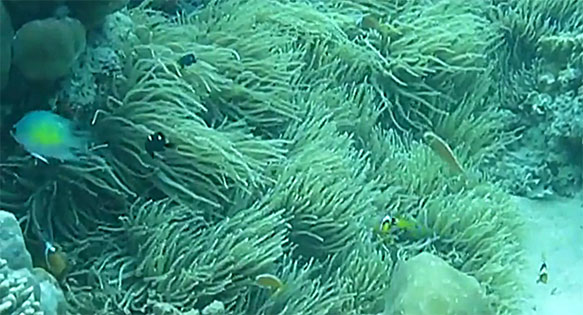 Screenshot from Andy Lewis’ video showing 5 species of Clownfishes all sharing a large anemone in the Solomon Islands.

Researching clownfish in the wild continues to drive me to investigate videos I would have never otherwise seen.

This particular video, by Andy Lewis and shot at Mbikiki Island, Vona Vona Lagoon, Solomon Islands, caught my attention because most of us believe that in any given anemone, we typically would find only one particular familial group of clownfishes.  This video turns everything on its ear, showing a total of 5 species all sharing the same small space on the reef.

Turn the audio down when you watch this one – it has a high pitched whining noise in the soundtrack!