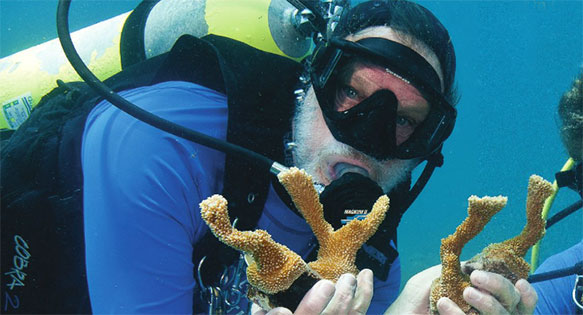 Ken Nedimyer has been named Sea Hero of the Year, presented by Scuba Diving magazine, for his field work in coral reef restoration. He earned the distinction for his techniques used to foster and transplant coral, birthing more than 50,000 baby corals from Florida to Bonaire to Colombia and — soon, Nedimyer hopes — well beyond. Scuba Diving, along with title sponsor Oris Watches USA, will present its 2014 Sea Hero of the Year award and a $5,000 prize to Nedimyer at the dive industry’s biggest event of the year, DEMA, on Wednesday, Nov. 19.

Founded in 2002, Nedimyer is the founder and president of the Coral Restoration Foundation, a nonprofit dedicated to creating offshore nurseries and restoration programs for threatened coral species.

“We are delighted to honor Ken Nedimyer as the 2014 Sea Hero of the Year for his work in coral reef restoration,” said V.J. Geronimo, CEO at Oris Watches USA. “As in past years, it was difficult to choose just one winner when each of our Sea Heroes has done tremendous work — this year’s causes included coral-reef conservation, protection for manta rays from Hawaii to Indonesia, and battling the lionfish invasion in the Atlantic and Caribbean.”

For Nedimyer, divers who help build coral reef nurseries are the linchpins of the ocean’s future. “I believe an engaged recreational dive community is going to make a huge difference in the health of our oceans over the coming decades, so it’s quite an honor to be recognized by the community as the Sea Hero of the Year,” Nedimyer said.

The $5,000 prize awarded by Oris Watches USA to the Sea Hero of the Year will help ensure that future. Nedimyer plans to use the prize as seed money to help start a new reef-restoration program, most likely in the Caribbean. He noted that the foundation has been approached by several different groups throughout the Caribbean who are interested in starting a restoration program in the area. As in many cases, the lack of financial support is preventing the start of such an institution.

“It’s not often that we get to see firsthand the work that our Sea Heroes do, but in 2013, I was fortunate to spend a weekend with Ken and his Coral Restoration Foundation team, helping with coral nursery work and outplanting off Tavernier in the Florida Keys,” said Patricia Wuest, editor-in-chief of Scuba Diving. “Ken’s untiring dedication to protecting threatened corals is the essence of CRF’s global mission, and it is impossible not to be moved by the group’s work once you dive in one of the offshore nurseries. We had five standout Sea Heroes this year, but I am thrilled that Ken was named our 2014 Sea Hero of the Year.”

Scuba Diving’s Sea Hero program incorporates an editorial feature highlighting “real people” who are trying to make a positive contribution to the environment or the aquatic world in general. Nedimyer was selected as the Sea Hero of the Year from a group of five finalists, who included manta and shark advocate Mary O’Malley, founder of the Manta Pacific Research Foundation Keller Laros, invasive-lionfish pioneer Lad Akins, and oceanography professor and coral conservationist Carrie Manfrino.

About Oris Watches
The maker of “real watches for real people,” Oris Watches has a long history of supporting marine conservation, with proceeds from limited-edition watches going to environmental causes.

About Scuba Diving
Scuba Diving is for divers who live to submerge, who can’t wait to learn about the latest gear and technological innovations in the sport, and who daydream of destinations both exotic and challenging while diving every weekend in their own backyard. From ScubaLab’s in-depth head-to-head gear testing — the only such independent testing in the dive industry — to the latest news on science, conservation, diving safety and travel, Scuba Diving covers all the hot-button topics of interest to serious divers.