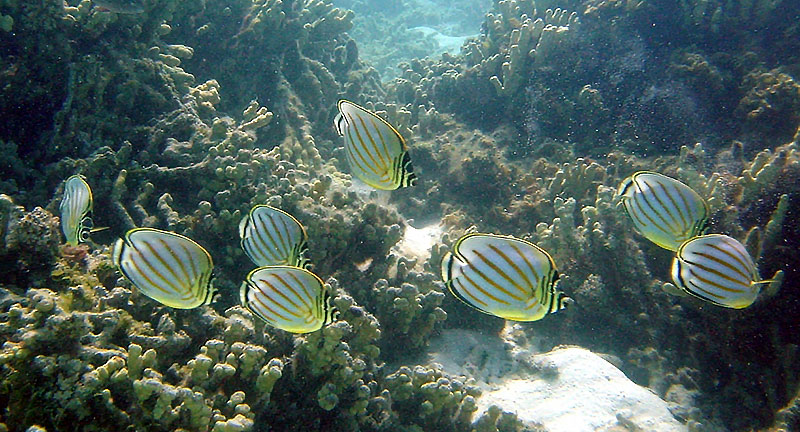 A shoal of Chaetodon ornatissimus, one of three Butterflyfish species now banned from collection in O’ahu, Hawaii.

Friday, October 24th, 2014, the O’ahu aquarium fishery rules package was approved unanimously by the Board of Land and Natural Resources (BLNR) during its regular fourth Friday meeting in Honolulu. The rules package, which was introduced at the request of the aquarium fishers in the summer of 2011, includes bag limits, size limits, net regulations, and a ban on several fish species. Its approval follows a West Hawaii aquarium fishery rules package, which became law earlier this year. According to a BLNR document requesting final approval of the rules at yesterday’s meeting, the fishers “recognized the need for better management of the fishery to reduce the potential for waste of limited resources and to implement conservation measures that would ensure the long-term economic viability of the fishery.”

Neither the State nor external scientists contend the fishery has been overfished or that overfishing is occurring. As such, the rules are not so much a response to any existing concerns about fishery sustainability as they are about better managing an already sustainable fishery. The O’ahu aquarium fishers have stated that the new bag limits are really about promoting animal welfare and not about how many fishes come out of the ocean. “[The bag limits] were not intended to limit the overall catch, and could never be effective at doing so,” explains one O’ahu aquarium fisher. “Those numbers were chosen because they’re what we feel a small boat can carry…without being overcrowded.”

The limits on net size are, on the other hand, about conservation and insuring fishery sustainability, according to the fishers.

The rules include limiting net size, imposing bag limits for six species and size limits for three species, and banning the harvest of three species. Regarding the net size limits, which are 30 feet long and six feet high, two permitted aquarium fishers may use their nets in tandem for a maximum of 60 feet.

The daily bag limits are as follows:

The size limits restrict fishers to no more than six per day of the following species: 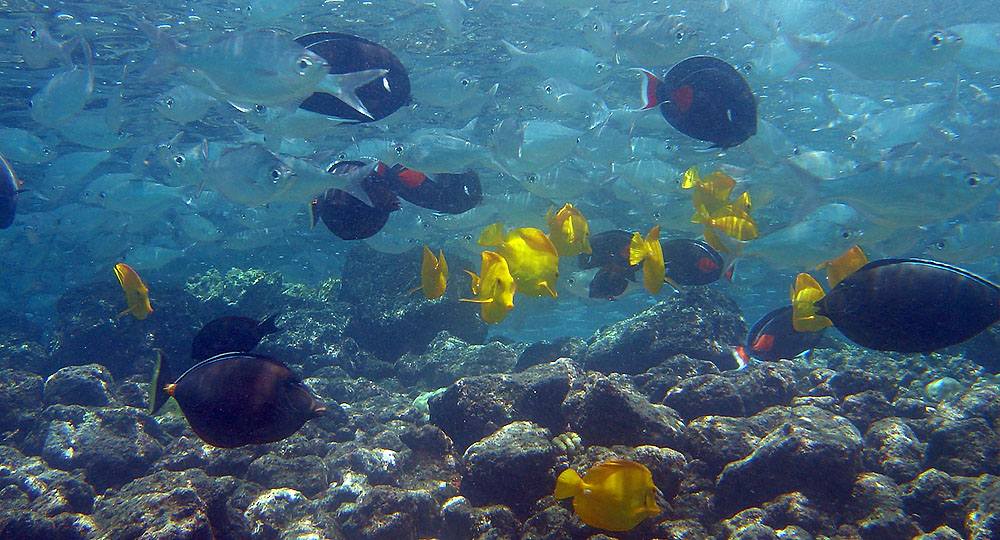 Naso, Yellow and Achilles Tangs, all fish collected in O’ahu that are now subject to new bag limits. The Yellow Tang is one of three species to also now be subjected to size-related limits or restrictions.

In addition, the new rules make it unlawful to harvest more than two bandit angelfish (Apolemichthys arcuatus) per day that are longer than five and a half inches.

Under the new rules, the harvest of following species is prohibited:

Like most aquarium fishery issues in Hawaii, moving this rules package through the process to becoming law has been controversial. Having said that, supporters who presented testimony at yesterday’s meeting outnumbered critics by about two to one. While there has been plenty of opposition from the usual suspects representing the anti-aquarium fishery movement, there has also been some criticism of various aspects of the rules from within the Hawaii Division of Aquatic Resources (DAR). In fact, disagreement over some aspects of the rules package reportedly led to the Oct. 24th resignation of the DAR Administrator, Frazer McGilvray.

Of all the individual rules in the package, the bag limits have been the most controversial. Some critics say they are too high and not based on fishery data. They point out that if every aquarium fisher landed the number of fish allowed by the new bag limits, the overall catch would skyrocket from current levels.

Fishers and those who helped draft the new rules say the bag limits were never intended to limit the overall catch. “The fishery has been sustainable for 40 years now without bag limits in place,” says O’ahu aquarium fisherman Matthew Ross. “Putting a number on things won’t magically make us catch more fish.”

A Step in the Right Direction

Overall, fisheries managers and O’ahu’s aquarium fishers are viewing the passage of the rules package as a success. While not everyone is pleased with all the details, most agree a regulated fishery is a step in the right direction. In particular, almost everyone agrees the net size limit and the size limits for kole and yellow tangs are important from a conservation standpoint. In addition, the Achilles tang bag limit is thought to be critical given that this is a species also landed in relatively large numbers in the virtually unregulated recreational food fishery.