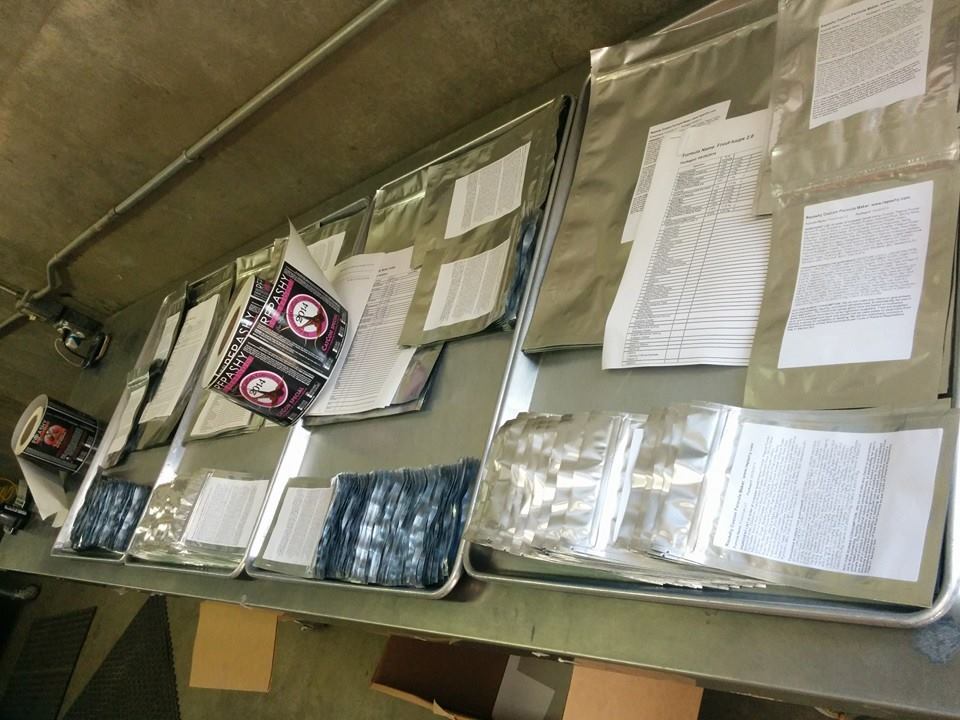 We don’t ordinarily cover products with any editorial context here on Reef2Rainforest.com. The reasons are simple and twofold; first, we prefer to remain unbiased so we present material as presented to us from any source. But also, we simply lack the time to opine on every last new product that comes to the aquarium hobbyist. There are other venues already doing that. But once a while, something really different comes up that deserves a deeper look with a critical eye.

Social media has been buzzing with rumors of something special involving fish food and the 2014 Catfish Convention in two weeks. Tonight I got “lucky” and stumbled across a Facebook post from Repashy Superfoods’ Allen Repashy, and suddenly all the pieces clicked.  A lot of back and forth private messaging, and I’m pleased to say that what initially appeared to be just some clever marketing turned out to include 4 custom blends of food, but more excitingly, a completely new way to engage with your fish food at the ground level, creating your own custom formulation online and in quantities as small as 1 kilo! 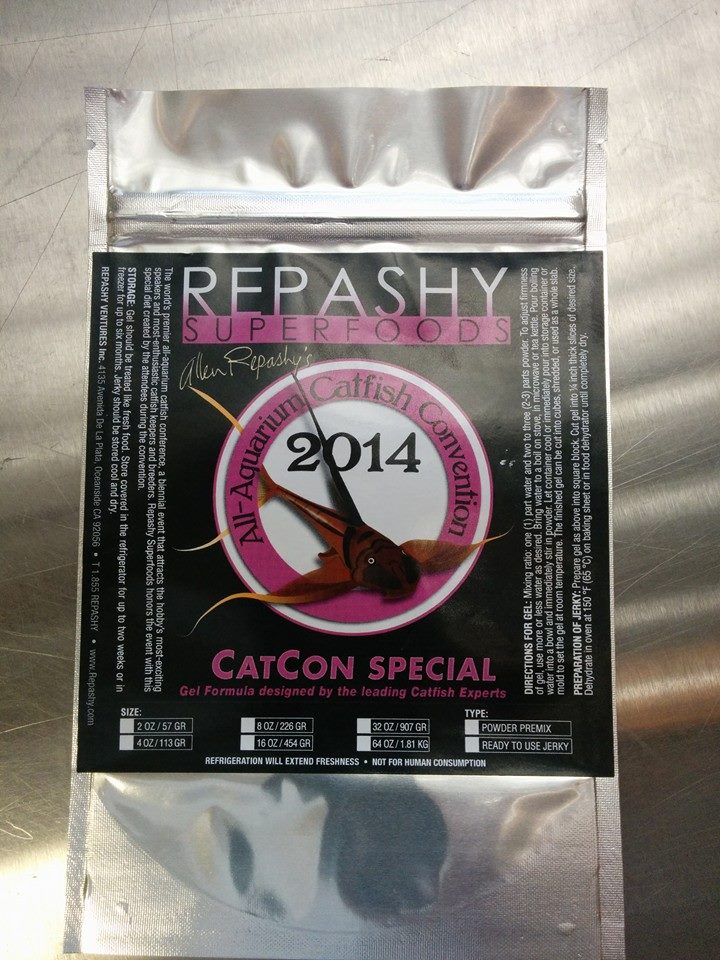 4 new and special blends of Repashy Gel Feeds for fish will be available through the 2014 Catfish Convention.

These four new diets are the work of two highly respected catfish keepers. Barbie Fiorentino, owner of Aquarium Solutions in Spokane, WA, has formulated two formulas; custom diets for meat and algae grazing pleco species. AMAZONAS translator and Sr. Editor, and Swiss Tropicals owner Stephan Tanner, is also involved, and will be offering two unique formulations of his own design. You’ll find these food in the special convention packaging, with the actual formulation and all pertinent info on the back panel. 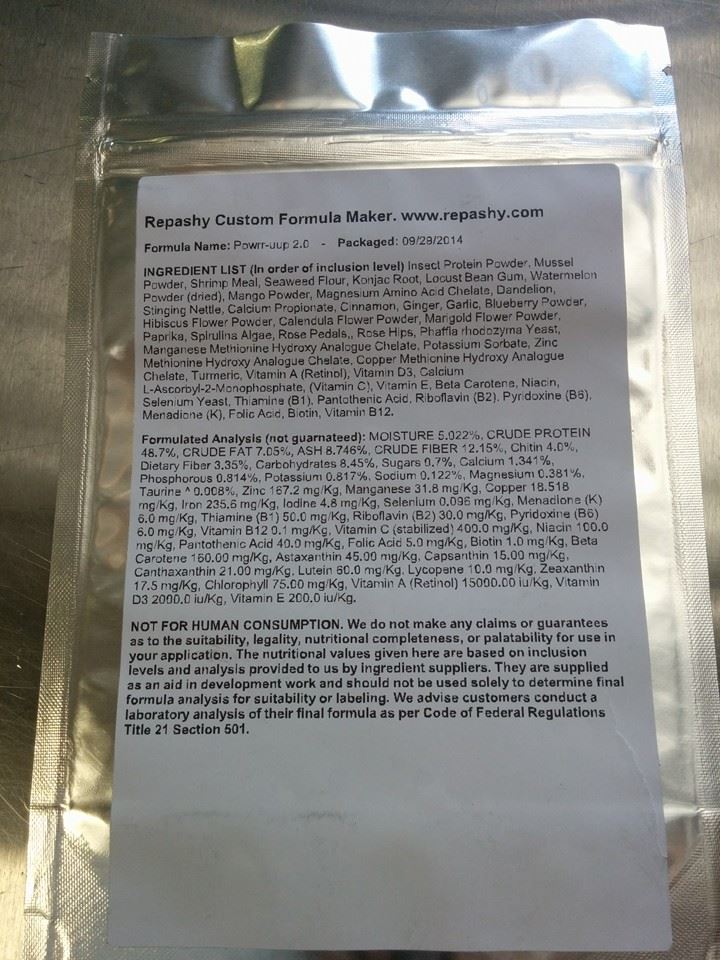 But the real story here isn’t just some new and unique foods, but the way in which they were created.

Allen Repashy relayed that Repashy Superfoods has been heavily invested in creating an interactive, online food formulating tool, for over a year now. Why is Repashy doing this? Repashy sums it up, “I think people are tired of being part of the ‘Matrix’, and personalization and customization are due for a comeback!”

The software is currently in beta testing, and some initial fiddling with it has me wondering if this may be the most revolutionary way to create a new fish feed, short of actually sitting in your home and doing it yourself. The online tool puts the entire suite of raw materials at Repashy Superfoods at your disposal. The Custom Formula Maker allows all Repashy customers to create their own unique, perfectly customized formulation for the particular animals they keep.

“I have been sorting out the bugs with some beta testers in the fish and herp hobby for a while now”, relayed Allen Repashy, “and everyone is incredibly excited about it.”

Indeed, Lars Jamne, a beta tester, volunteered that “Allen helped me with a carnivore formula with all high end ingrediens and it has become very populare over here in Norway already. So neat when you can optimize the food for all your tanks. I will never go back to ordinary dry food…”

Repashy has big plans for the custom formulater on their website. “It will let someone formulate and purchase their own formula built, mixed and sealed all the way down to a single kilo. People can share formulas, keep them private….. repackage and sell them under their own name, or be part of a signature series that Repashy makes. The combinations and applications are limitless. We have zoos using it for specialized diets, bird breeders working on hand-feeding formulas, custom reptile diets, and of course fish formulas.”

2014 All Aquarium Catfish Convention attendees will be given one of the first looks at formulating a custom Repashy food at the convention. The time and place is TBD, but the plan is to allow “everyone in the room [to] work together and decide on a target species and then vote on ingredients and make a special formula that we will call the CatCon Special, which we will sell until the next CatCon where we will make a new one.”

I too was given the opportunity to fiddle with the custom formulator and wow was I impressed. I’m given the full range of available ingredients to play with when creating what I think might be the perfect food for my marine fish breeding.  And just as easily, I could publish and share my work with Allen, who looked at my sample formula and suggest that I’m probably using too much shrimp meal, which is raising the ash content of my feed, ultimately putting more calcium and phosphate into my aquarium (and therefore, encouraging algal blooms!)

A screenshot of the BETA Custom Food Formulator at Repashy.com

Formulating your own food can be a bit daunting for those who don’t know the first thing about fish nutrition, but Repashy is quick to relate that this isn’t really a product and service intended for the masses. “We aren’t out to make products for fish hobbyists; our target market is the ‘less than 1%’ group we call the Fish Fanatics”.

For the moment, fish keepers will be pretty much limited to either feeding these formulations as a dry powder, or in the manner in which most Repashy diets are currently used in the aquarium hobby, as gel-diets which are mixed on an as-needed basis. Repashy did allude to the possibility of a pellet and crumble variation in the future…frankly I think that would take this very innovative approach to fish food from “novel” to “how could you not do it?!”

There is still much to be done with Repashy’s online Custom Formula Maker, mainly circling around documentation and supplemental information. As with any new product and service, a lot of the kinks and guesswork will likely be eliminated early on. There is no official “launch date” set at this time; Repashy hopes to have all the bugs ironed out, and a supportive community in place, by the first quarter of 2015.