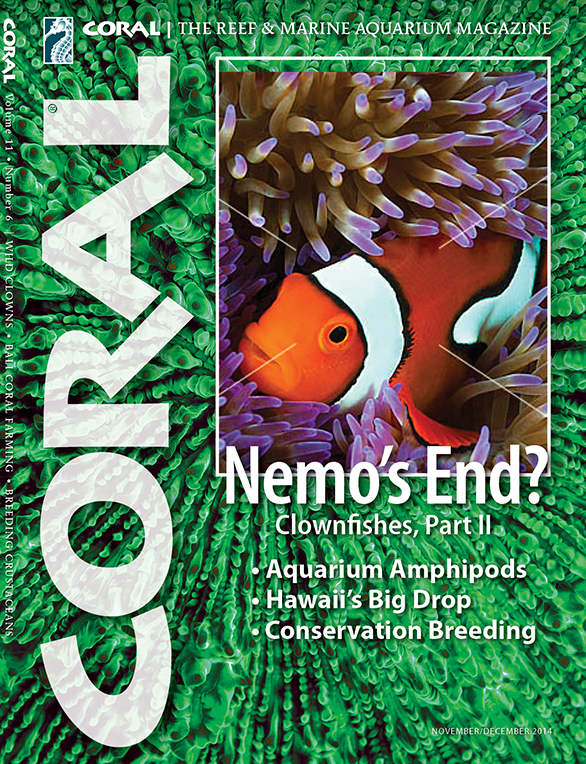 DEADLINE for materials to be included in this issue: Friday October 10, 15th.
The issue will reach homes and stores in the first week November, 2014.

Imagine the marine aquarium hobby and trade without its most popular and iconic fish species: Amphiprion percula and Amphiprion ocellaris. That is a future now within the realm of possibility as political activists are moving to have the fish known as Nemo protected under the U.S. Endangered Species Act.

In the much-anticipated Second Part of CORAL’s Clownfishes Special Issues, Senior Editor Ret Talbot looks at what is happening with moves to have certain clownfishes and stony corals listed as threatened or endangered, and what it could mean to the aquarium trade and the right of marine aquarists to buy, keep, and propagate these species in their home aquariums.

Also forthcoming with be Scott Michael’s field guide to the wild anemonefishes, must-keep maps of species ranges, Matt Pedersen’s look at the arking of natural strains and rare variant clownfishes, and a portfolio of unforgettable underwater clownfish images from the Red Sea to the Great Barrier Reef.

• Perplexing Polyps
What to call those wonderful stony corals whose polyps are neither large nor small? Coral farmer and importer Than Thein reviews some of highly desirable “in-between” species and talks about why coral biologists would rather we all forget about “SPS corals.”

• Crustacean Breeding
Further adventures in the pioneering attempts at captive reproduction of aquarium shrimps, a new frontier for marine breeders.

• Hawaii’s Big Drop
Divers and fish collectors in the Hawaiian Islands are reporting a reef fish spawning season unknown in human memory, with shoals of juvenile butterflyfishes, tangs, and others appearing in “Biblical Proportions.” Underwater photographer Pauline Fiene has documented the event, and Ret Talbot interviews Hawaii’s marine biologists, aquarium collectors and lifelong fishermen about what is happening and what it means.

DEADLINE for materials to be included in this issue: Friday October 10, 15th.
The issue will reach homes and stores in the first week November, 2014.