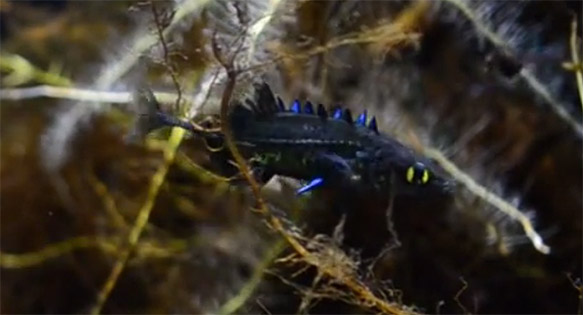 For all the privacy invading worries that social media like Facebook has to offer, the random connections and unexpected discoveries that can be made perhaps balance things out a little. For example, consider this random Friday night surprise.

I’m minding my own business, wading through my Facebook news feed when this black fish with several bright blue dorsal spines and a bright yellow eye stops me dead in my tracks. Turns out I owe Ted Judy for this random bit of excitement, and he in turn had found it from one of his presumably aquarium-oriented friends Christian Van Belle, and ultimate the image linked back to the random blog “Happy Water Life” which appears to be hosted on the German Blogspot service and apparently run by a Korean fish enthusiast whose name I can’t really discern.

I get the name of Pungitius kaibarae from the blog, but a bit of researching reveals that this particular species name might not be considered valid, being listed as a synonym for P. sinensis according to Fishbase, with a common name of Amur Stickleback (also the Short Ninespine Stickleback).  Turns out this is a pretty widespread species in Asia, and of course, one starts to wonder if we’d ever see it available in the aquarium trade.

Of course, the random nature of the internet doesn’t stop there, as back on Facebook yet another friend of Ted Judy, David Yoder, has to pile onto the conversation and share this really cool video of the species.

One video leads to another, and before you know it I’m looking at an entirely new video channel, run by YouTuber Narcinark, who clearly has a penchant for offbeat native Korean freshwater species…and I could be lost for hours watching this treasure trove of media. But that YouTube channel is by no means a dead end, before you know it I’m on “Narcinark’s” Blog, looking at some other stunning fish photos…presumably again some offbeat Asian natives. This fish, new to me, stops me in my tracks. It’s definitely reminiscent of a Bitterling, but I’ve not seen it before! 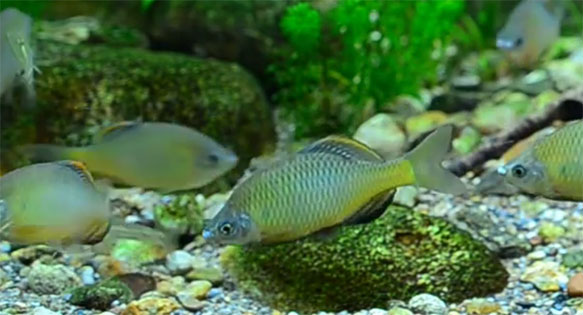 Then I circle back and find the video below which finally identifies them them as Acheilognathus koreensis, and with a little more insight I’m able to find their common name, the Korean Bitterling (aka Oily Bitterling). Sure enough, there’s more than one video back over on YouTube of this stunning fish!

And now I’ve stayed up an hour later than I had intended to, and  I want to go to fish collecting in Korea! Do these unusual fish grab you the way they grab me? Want to see more? Tell us in the comments below!