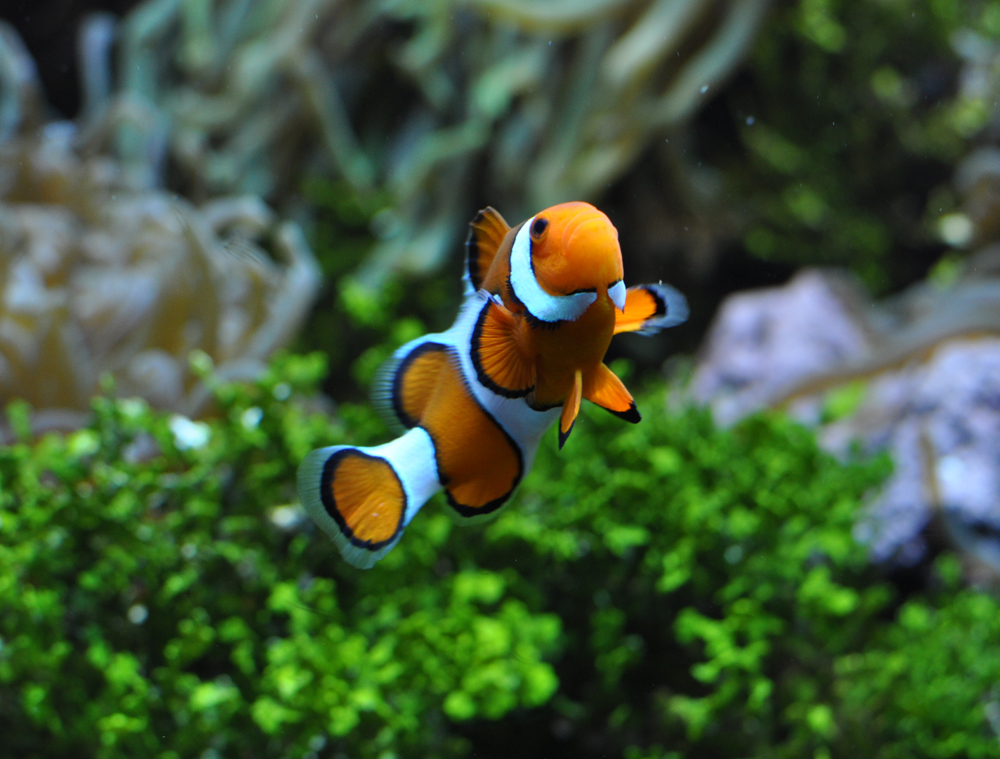 I’m approaching this topic with less recalcitrance than I have in my former blogging years for two, equally weighted reasons. This contentious outburst is to be my first official marine aquarium blog outside of my native, stiff-lipped shores. Declarations that I used to be able to make with impunity could be culturally debunked before they even get off of the ground. I’ll tread carefully.

The second reason is that in my heart of hearts, my own, relentlessly obstinate core has softened. Opinions I used to hold dear have softened. I’m just going to throw this topic out there, plant some seeds, see what comes back.

I used to visit a lot of stores, at least five or six in a different British county on a monthly basis. With that much aquarium exposure, it was hard to avoid the almost noisy glare of designer clowns leering out at me from various sale tanks. For the first few times, in my mind I was lining up the pedestal, ready to climb aboard and put the world to rights with vituperative outbursts. But I faltered. 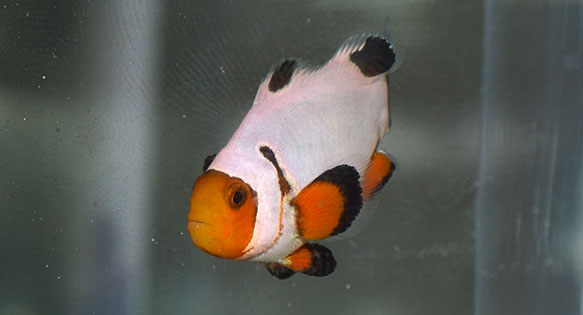 The counterpart to the “Platinum Percula”, this all is the all-white form of A. ocellaris, generally known as “Wyoming White” or simply “White” – image courtesy Matt Pedersen

As I scowled at the tanks, trying to find something wrong with the garish, platinum inhabitants, I found that I had no quarrel with them. So I went away to think about it.

I should take a moment to digress, and highlight perceived differences between the American and the English hobby, though I can only speak with any measure of authority on the latter. The mindsets between our two nations are, I think, wider than the ocean that separates us. This is important stuff, and hopefully it needn’t distract us for too long.

From what I can deduce from this end, the American hobby falls broadly in to two camps. Remember, this is only how it is perceived here, so don’t bat me down too early on. The first camp is low end freshwater. I’m talking jumbled tanks with bits of everything, and a cavalier attitude to hybrids like Parrots or Flowerhorns. The second camp is high end marine, with as much money spent on a skimmer as on one year’s groceries. When it comes to caring for your corals, we Brits have to admire your willingness to splash out to the point of selling kidneys to fund your passion. It’s as though the two aspects of the hobby are opposing ends of the same magnet. Then, of course, there are the specialist hobbyists and biotopers, of which we can’t help but notice is either a small or unusually quiet contingent. I know they’re there, I’ve seen their tanks. And they’re great.

In the UK, the camps pan out differently. There are the low to low middling freshwater keepers, and the low to low middling marine aquarists. This is a generalisation, of course, and I’m well aware of those very few exquisite marine and freshwater tanks in my neighbourhood. I’m talking about the majority numbers here; the trade drivers. Feel free to call me a snob, by this point.

However, the major difference between us is our opposing views to the ‘rights’ or otherwise of fish. Rights, welfare, ethics; choose your name. In the UK, punches have been thrown over the live feeding of fish. There have been legal repercussions, widely circulated in tabloids, over perceived cruelty to goldfish. You could accuse us of being tightly strung, and in some cases I’d agree. Some of our arguments over the rights of animals reach such high pitch that only dogs can hear them. I’m going to unashamedly take the stance of being on the side of the fish defenders. That’s not a holier than thou attitude, I should add, but one I’ve been driven to after years of ethical study.

Culturally, the American market seems much more liberal when it comes to animal rights, although maybe anthropocentrism is the driving force. I won’t lie, I’m flying blind when it comes to popular American ethics. The fact is, you guys don’t get as hung up about things like an Oscar nailing its way through a shoal of runt platies as we do. I know people who’d go as far as to light candles and hold vigils in the wake of such a tragedy…

If I can come back to the basis of this blog, you’ll recall I was talking about designer clownfish, and I’m keen to hear the opinions of Americans on these fish. Is it in any way ‘wrong’ to tailor the colours of fish like this as we see fit?

Before you baulk, there are a couple of factors I want to introduce. The first is the slippery slope principle. Maybe there’s nothing wrong at all with simply altering a colour. We’ve been doing it for years with multiple domestic species. But therein lies the problem. We know, for example, that different colour strains of guppy, for example, can have compromised immune systems on the basis of their enhanced colouration. But we also know that it doesn’t stop at colour. We humans love a novelty, and we love to embrace anything that’s a little bit different. What starts as an extra shade of blue in a fish ends up – generations later – as a balloon fish with compressed organs, missing vertebrae, long fins, impossible posture and congenital woes. Don’t believe me? Go look at an import list for Rams out of the far East.

So what? You’d be fair to ask, but this is what I’m keen to investigate. Does the welfare of the fish not register as worthy of any kind of moral inclusion? We know now, courtesy of the likes of researchers like Culum Brown and Lynne Sneddon, that fish have some sense of pain, be that analogous to our own, or directly comparative. And I’m not sure about everyone else, but it’s the empathic concern brought by suffering that makes me worry about the wellbeing of others.

Anyway, breeding a clownfish with more white in it is hardly the same as tweaking its internal structure, though it is the first step on that ladder. The colours are market driven, with designer clowns commanding (frankly) extortionate prices. Would a long finned clown command more? How about a humphead, or balloon variant? I’m not sure, but I think the UK market would reject them.

That said, we never drew a line under fancy goldfish variants. To date, bubble-eyes, celestials, pearlscales and more are still readily available, though they are much harder to sell today than they were twenty years back. Scrub my last point; given the right price point, a goggle-eyed, long-finned clown would probably fly in the right circles. I’m well aware that clown colours are the process of selective breeding rather than inbreeding, but I’m also painfully aware that unscrupulous breeders, sensing a fast buck, might be happy to forego a few moral quandries to make some cold, hard dollars. Money talks, and ethics don’t put food on the table.

My other worry concerns escapees; bright clowns escaping in to the wild and spawning with indigenous clowns around the world. Whenever I raise this point, I get the same unqualified answer. ‘They’d never survive’ I get told. ‘They’d be picked off by predators.’ Well, that’s great and all, now back that up with some data. We don’t know if they’d get picked off en masse, because we lack the observations to confirm it. We don’t even know the actual rate at which anomalous clowns appear in the wild, and what happens to them. Bright colours aren’t always a disadvantage, either. Look at studies with things like White Cloud minnows. A lot of female fish take a shine to bright, artificially coloured impostors over their natural counterparts. Many female fish have more of a Peacock/Peahen mentality than it would first appear. And we know escapees happen, as well as deliberate releases. Just look at Lionfish. And yeah, nobody is going to release a £150 pair of quality clowns into a local rockpool, but what happens when that price plummets? Give it time…

Have I really got a basis of concern in all of this? Probably not, but the purpose of this blog is to be prescient more than pragmatic. It’s early days for designer clown breeding, and I tip my hat to those who are currently doing it. You’re doing a marvelous job, turning out fish of impeccable health – at least where I’m seeing them. All I’m asking is that we consider at this time where it’s all going to head. If we can keep that price high so that the fish don’t become disposable, then great. And if you could open hand slap anyone who tosses out the idea that a balloon variant might be worth ‘engineering’ then that’d be just swell. Film it happening and I’ll buy you a beer in to the bargain.

Either way, I’m keen to hear what people think of designer clowns, on both sides of the ocean. Are they going to slip down that goldfish route, or are we better than that? Have we learnt? Did we even do anything wrong in the first place?

Nathan is the Editor of Practical Fishkeeping magazine. He has previously worked as a public aquarist, retail manager, livestock manager, lecturer and writer, and has kept more fish than he can honestly remember. His background is as philosophical as it is aquatic, and he frequently writes on animal ethics for a range of sources.