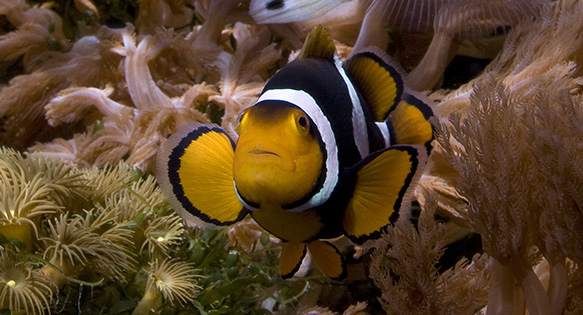 The “Onyx” variant of the Orange Clownfish, A. percula, a species whose ESA Listing is up for debate.

As we reported last week, the Percula or Orange Clownfish (Amphiprion percula) is now in status review with the National Oceanic and Atmospheric Administration’s (NOAA) National Marine Fisheries Service (NMFS) for possible Endangered Species Act (ESA) listing. The move from a petitioned species to a species under status review is, in and of itself, not very significant. Nonetheless, the fact remains that this iconic aquarium fish is one step closer to being listed, and that’s got a lot of people talking. Talk is cheap, though, and amongst all the talk, the data commonly get the short end of the stick. We thought it might be useful to cut through the hyperbole and spend a moment looking at what the data actually say about the marine aquarium trade’s effects on wild populations of Orange Clownfish (the common name being used in NOAA discussions).

So what data are out there now? Before we ask that question, we need to understand the context of the data currently being discussed as a result of NMFS’s 90-Day Finding document. When a species is petitioned for listing, NMFS scientists are only allowed to look at data and information submitted by the petitioner or already in NMFS files. In other words, if the petitioner writes a compelling petition that appears supported by data, then NMFS announces in a document called a “90-Day finding” (which is supposed to be published within 90-days of the original petition, hence the name) that they intend to take a closer look.

This closer look is called a “status review” and is far more comprehensive then the initial review of the petition. During the status review, NMFS scientists will fact-check the data and other information submitted in the petition, and they will go far beyond those data, seeking out the best available science and reaching out to anyone who may be considered well informed about the species or the threats it faces. Therefore, since we’re just at the beginning of the status review, the data and information currently being discussed are very preliminary.

Another important fact to keep in mind before looking at the data is that, as is the case in the 20 species of coral recently listed as threatened under the ESA, the marine aquarium trade is neither the primary focus of the petitioning organization nor the primary focus of NMFS. In the original petition filed by the Center for Biological Diversity, the word aquarium is used less than 50 times, whereas acidified and acidification are used more than three times as much. In short, the petition to list the orange clownfish is chiefly about threats like ocean acidification to anemones upon which clownfish depend.

Unlike the recent coral listings, where NMFS states in its final rule that the aquarium trade poses a “low” threat for extinction, in the case of the Percula or Orange Clownfish, NMFS says it doesn’t have enough data at this point to assess the effects of wild harvest on the species. What NMFS says it does know is that the number of A. percula imported for the aquarium trade in 2005 was absolutely less than 200,000. Unfortunately, in the popular media, the story often became, “the aquarium trade takes 200,000 Orange Clownfish annually,” a statement that is not supported by the data and was not included in the NMFS’s press release or the CBD’s press release announcing the status review.

“In reality, we’re probably talking closer to 50,000 imported to the U.S. in 2005,” says Dr. Andrew Rhyne of Roger Williams University and the New England Aquarium. Rhyne, who has been working with trade data for the past several years, says the number of Percula Clownfish imported to the U.S. in 2011 was probably somewhere closer to 30,000 or so. Those data remain unpublished and have not been rigorously peer-reviewed yet. Nonetheless, they remain a pretty far shot off the 200,000 claimed by some media outlets.

The error seems to have arisen from a blogger’s misreading of the NMFS 90-Day Finding document, although aquarium trade advocates also cite CBD for “attacking the trade” and publishing wildly inaccurate data in the petition. In the 90-Day Finding document, NMFS states, “We also know…that within the range of A. percula, at least 255 different species of reef fish, totaling just over 200,000 individuals, were exported to the U.S in 2005.” NMFS goes on to explain that, for the countries within the orange clownfish’s range, the data do not suggest the numbers were skewed heavily toward one or even a few species. “Given the above information,” they conclude, “we can only infer that total A. percula imports to the U.S. were less than 200,000 individuals.” The CBD petition makes no mention of the 200,000 statistic.

Rhyne reaches his estimate of somewhere around 30,000 Amphiprion percula imported to the United States in 2011 by looking at preliminary estimates of imports of all species of clownfishes. That number, he says, is probably somewhere around 300,000 in 2011, which is down from the published 2005 number of closer to half a million. Rhyne says that while there has been a steady decrease in clownfish imports over the past 15 years as more aquarium clownfishes are bred in captivity, the percentage of those clownfishes that are Orange Clownfish has likely remained consistent at s ballpark figure of around 10 percent. Rhyne believes the trend of decreasing imports of clownfishes will continue, but it’s important to remember that his are unpublished estimates based on preliminary calculations. While they are grounded in intimate familiarity with both the data and the trade, these numbers may change when they are published, perhaps as soon as later this year.

The other major factor when considering the marine aquarium trade’s effect on wild clownfish populations is how many wild harvested clownfishes are going to other countries, especially China, which is home to a rapidly expanding marine aquarium hobby. Because of a lack of fishery data and trade transparency in many source countries, this question is difficult to answer. Of course, also knowing what the wild population of Orange Clownfish actually is would be a critical piece of information. To this latter question, NMFS says in its 90-Day Finding, “The petition did not present any information on the global population size or trends of A. percula and we do not have any information on A. percula’s global population size in our files.”

It will be interesting to see what data come to light as the status review moves forward. All information and comments should be submitted to NMFS by 3 November 2014. You can submit commentary here.