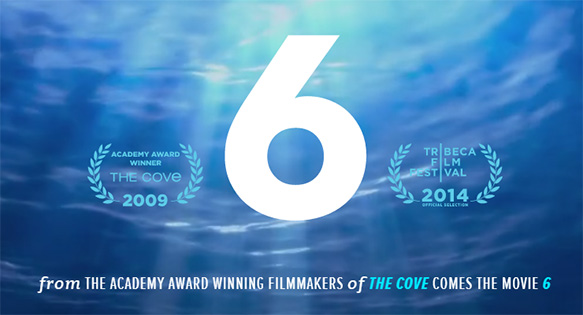 Screenshot of the website for the Ocean Preservation Society’s forthcoming film, “6”.

Update: As of 9-12-2014, this film’s name was changed to “Racing Extinction” and with it, a new round of media, including trailers and a new website, were released.  For more information, visit http://www.racingextinction.com/. Our story below, remains as was updated through 9-11-2014.

This trailer for the forthcoming movie, “6”, crossed our desks this week and has our attention. The trailer above was originally published earlier this spring, April 25th, 2014. The new film was put together by the filmmakers who produced “The Cove”, the award winning documentary covering the Taiji dolphin hunt in Japan. Rich visuals and a compelling soundtrack accompany startling footage and soundbites in this trailer, which has been viewed over 179,000 times since being published. [Update, as of 9-11-2014, 6 PM, it appears that the trailer for this film has been made private on Youtube; it is no longer embedded on the film’s website as well. It remains available for viewing via the Cove Facebook page, at https://www.facebook.com/video.php?v=10152905925739616]

I don’t know the full story or narrative behind this film, but we can guess. From the film’s website:

“In this ground-breaking film a team of artists and activists exposes the hidden world of extinction in never-before-seen images that will change the way you view the world.”

A bit more digging revealed what is apparently a fundraising video, currently only viewed by less than 1,200 times,  from January 15th, 2013, which alludes to the “heist” being talked about in the trailer.

An unbaised documentary, presumably this is not. It becomes clear that the filmmakers have a goal to push for social change.

Of course, with all the recent attention placed on the aquarium trade, particularly by organizations including Sea Shepherd and, to a lesser extent, the Center for Biological Diversity, we have to wonder if the marine aquarium trade is mentioned in this film at all, and if so, in what context.  Our interest, as aquarists, is often portrayed by outsiders as one in opposition to conservation goals (I’ve said the aquarium trade is an unquestionable luxury, and therefore, makes an easy scapegoat). Most veteran aquarists would strongly disagree with the way the act of keeping aquariums is portrayed to the public in recent times, particularly since it’s fairly demonstrable that in many cases, it is the aquarists themselves who are the only ones truly concerned with the preservation of small, often unknown fishes, that mean little to the greater global community.

The topic of “6” is is timely, and one that we believe most aquarists are interested in. I assume that, once released (reportedly this fall), “6” is a film that fish and reef lovers will want to watch, and for better or worse, will certainly discuss and debate.

I’d love to write more and investigate more, but we’ll have to leave it here for today. Check out an interview from earlier this year with the film’s director (and Executive Director of the Ocean Preservation Society), Louie Psihoyos at Ecorazzi.com