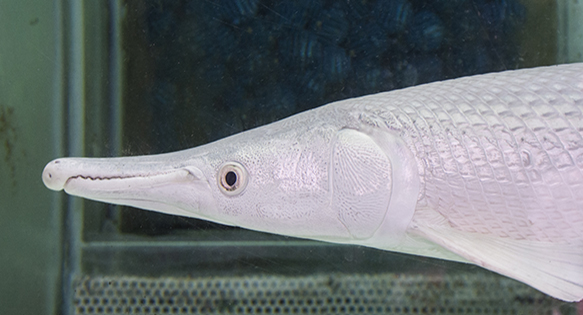 Bangkok, Thailand. The city is difficult to categorize, its skyline seemingly more the product of spontaneous generation than urban planning, with centuries-old teak houses melding into faded concrete blockhouses giving way to impossibly bright and ornate Buddhist temples—and all of this overshadowed by towering modern skyscrapers.

Bangkok is also the epicenter of Thailand’s close cultural affinity for tropical fish keeping and breeding. Not only are freshwater aquarium fish a major export from the region, but the keeping of aquarium fish is also extraordinarily popular and widespread here. From the pair of massive giant gourami (O. goramy) swimming placidly around a decorative fountain on my street corner to the aquariums (usually housing arowana or hybrid cichlids) proudly displayed in the entrances of many restaurants, tropical fish are everywhere in this city. And the best of them can be found in the famed Jatujak (often spelled Chatuchak) weekend market, which is why I found myself in a tuk tuk careening through multiple lanes of traffic on my way to the market shortly after my arrival in Bangkok. 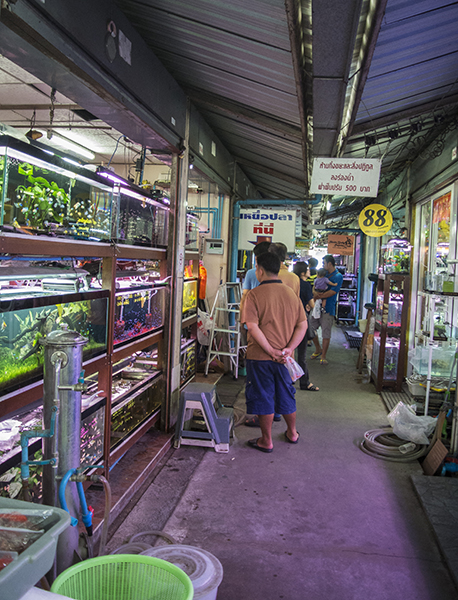 This sprawling market, the largest in the world, contains thousands of stalls arrayed across 35 acres and full to bursting with shoppers on any given weekend day. After an exhausting hike through the labyrinth of stalls selling everything from kitschy souvenirs to knockoff designer clothes (but no fish!), I finally asked for directions and learned the fish market is set just outside the main cluster of the weekend market. 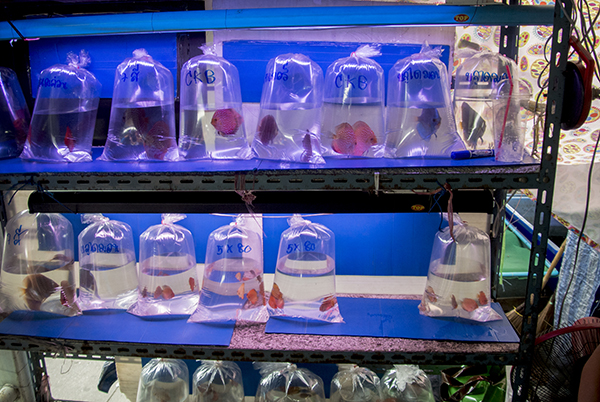 As I made my way over to the fish market, the first stalls to greet me along the outside were koi sellers, with everything from pre-bagged juvenile fish no more than 8cm to huge 80cm+ specimens set up in collapsible pools. On entering the market itself, I found it to be no less bewildering than its larger counterpart across the street. An incredibly diverse array of fish were on display in all manner of tanks, bags, tubs, and even bottles. Almost immediately I realized that this was vastly different from any aquarium shop I had visited in the US—and that these were some expensive fish. 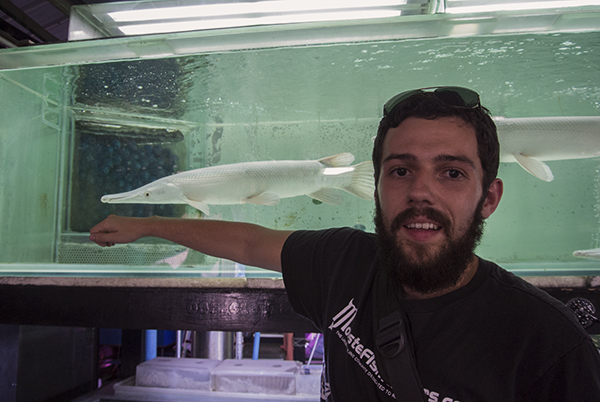 So called “monster fish” dominated the dozens of individual stalls inside the corrugated-tin roofed structure, with mind-blowing freshwater rays, bichirs, knifefish, snakeheads, and catfish all well represented. Inside the first stall I visited (where I unfortunately was asked not to take pictures), there were dozens of paroon sharks (Pangasius sanitwongsei) swimming circles around several monstrous Datnioides and in a tank by itself, a 25cm mormyrid was playing with several ping pong balls, pushing them back and forth along the bare bottom of the aquarium. This shop also had some very interesting (and of dubious legal origin) reptiles and amphibians available, including mata mata turtles and what appeared to be juvenile Chinese giant salamanders (Andrias davidianus)—the world’s largest amphibian, capable of growing to almost 2 meters in length. 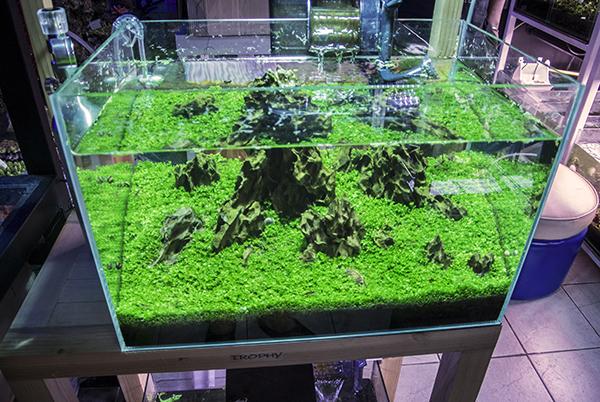 Aside from the wide variety of tankbusters on display, there were also a number of shops dedicated to nano aquaria, usually featuring truly impressive fully planted aquascapes. Although their fish offerings were sparser than some other stalls, the selection of aquatic plants and mosses was staggering, encompassing everything from enormous “mother” Anubias plants in terra cotta pots to perfect little spheres of pellia (both Monoselenium and “round leaf”) perfect for nano scapes. 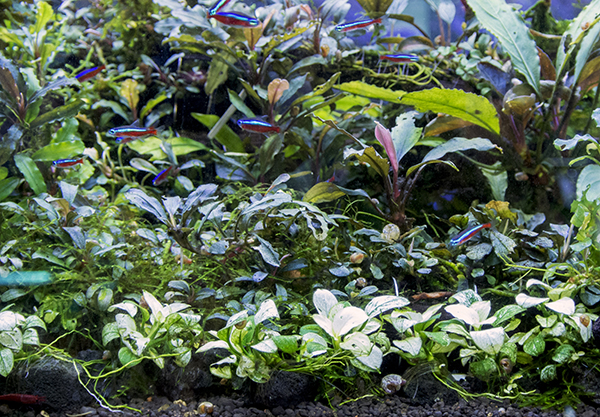 Foreground plants, including a ‘platinum’ variant of Anubias minima 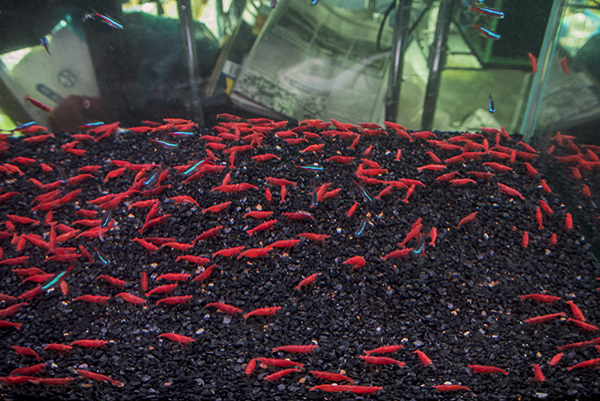 What was perhaps most striking feature of all the stalls I visited was the prevalence (and, I assume, desirability) of fish exhibiting unusual genetic mutations. Not the simple albino or gold forms of fish common in the US trade (although those were popular as well), but balloon, short body, or other physical abnormalities. I know there are plenty in the hobby both in the US and Europe who would view such fish as disgusting or profane, but I try to remain fairly neutral in the ongoing debate over wild versus line bred forms. So rather than pontificate on the horrors of these “deformed” and often hybridized fish, I will merely note that they were quite common throughout the market and often commanded a very high price. It’s also worth mentioning that as the region of the world responsible for developing the comet goldfish into the hundreds of distinct breeds it is now available in, Asian cultures often have a very different perspective on line breeding to create new shapes and forms. 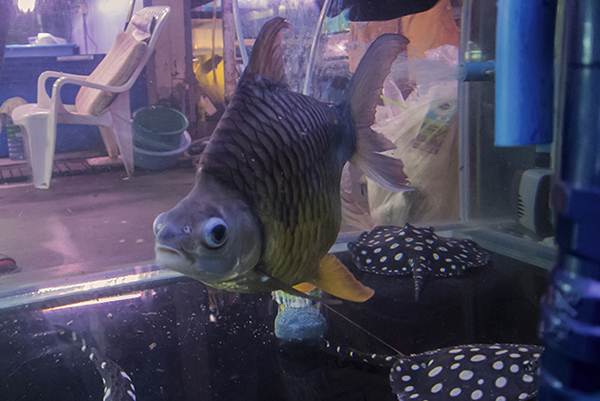 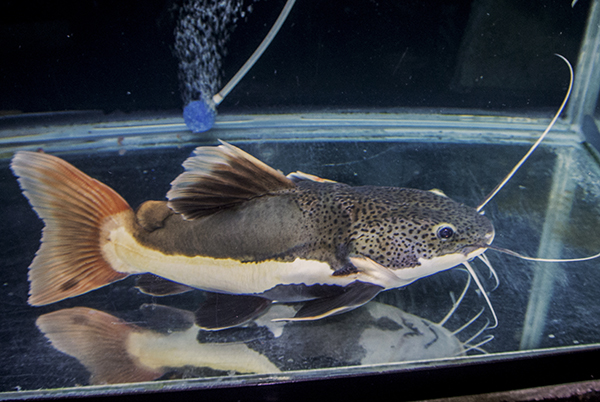 Short Body, but still a monster: the iconic Redtail Catfish

Short body tinfoil barbs, looking more like ryukin goldfish than barbs, along with short body Chinese algae eaters, short body clown knifefish, and even tiny balloon pearl gourami were all readily available. In addition to these interesting specimens, many of the higher end stalls had “batman” freshwater rays on display, with prices starting at $800+ USD. This unique condition is caused by a failure of the disc to fuse as an embryo, giving these rays their bizarre appearance, not too far off from the iconic batman logo. 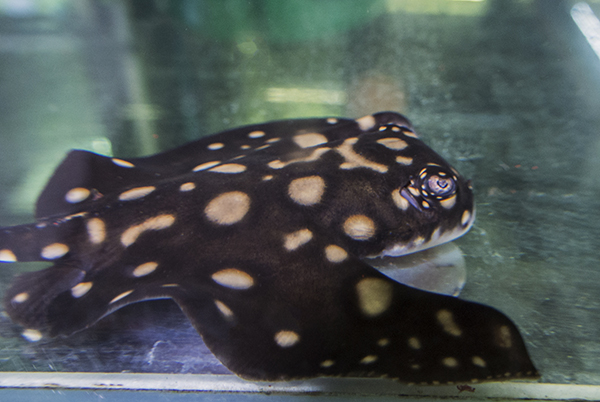 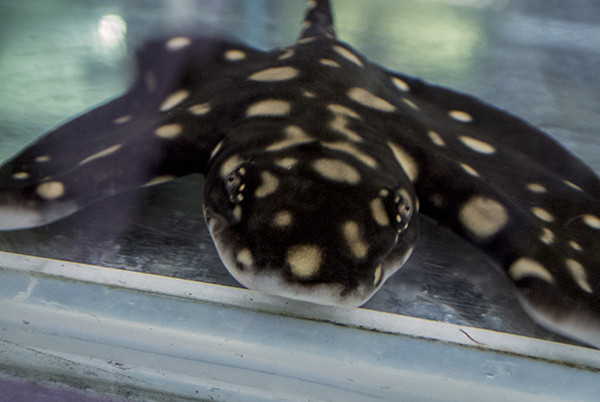 Flowerhorns of all shapes and sized were also well represented at the market, but I was told that the flowerhorn craze had peaked a few years ago in Bangkok and that their popularity here is in a bit of a decline. 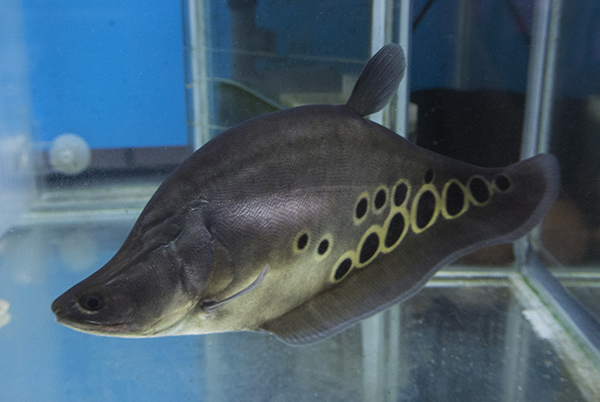 After making my way through the bulk of the stalls (difficult to tell what I might have missed, given the maze-like layout), I spotted one prominently featuring a wall of bettas. The woman who owned this shop was a local betta breeder specializing in fighters (pla kat) and she proceeded to enthusiastically show me some of her top specimens. Koi bettas, bred for color patterns resembling sanke or tricolor koi, are all the rage in Bangkok at the moment and even the few mid-grade fish she had for sale were around $40 USD each. After waiting out the daily monsoon rains (which had rolled in without much warning), I took leave of Jatujak market and headed back to my guesthouse, deeply impressed with the incredible variety of fish I had seen there. I’ll continue to post more updates from my travels as I have the time, but for now, enjoy the rest of the many photos I was able to take at what is perhaps the world’s most unique tropical fish market. 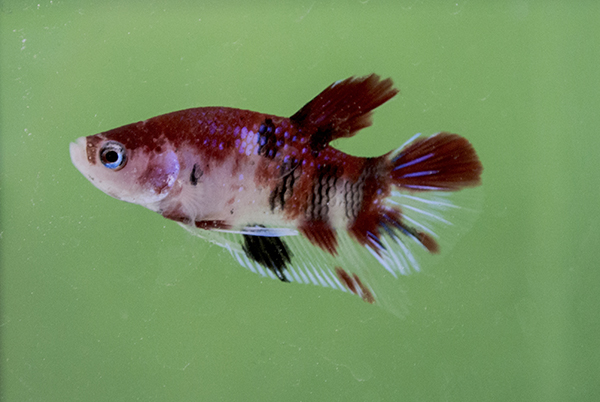 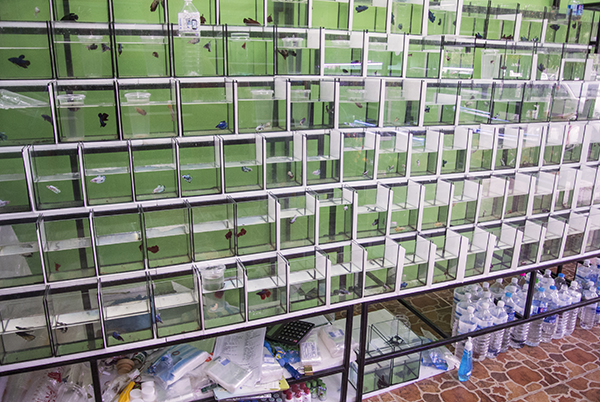 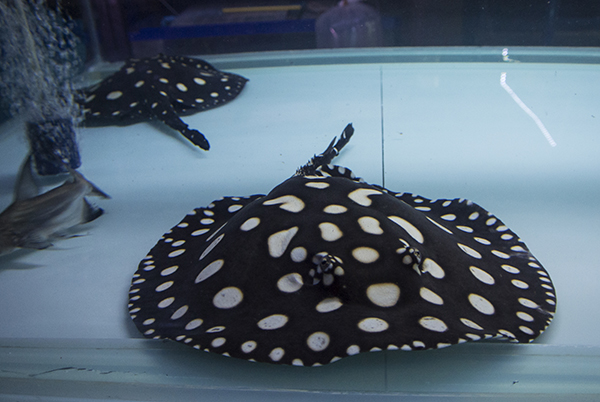 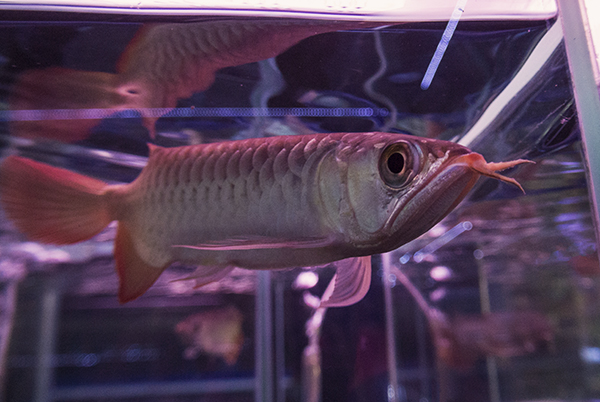 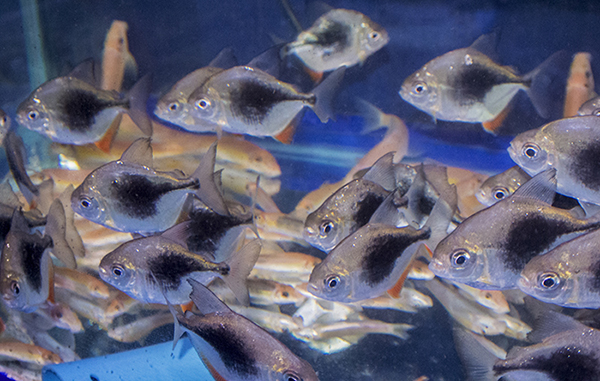 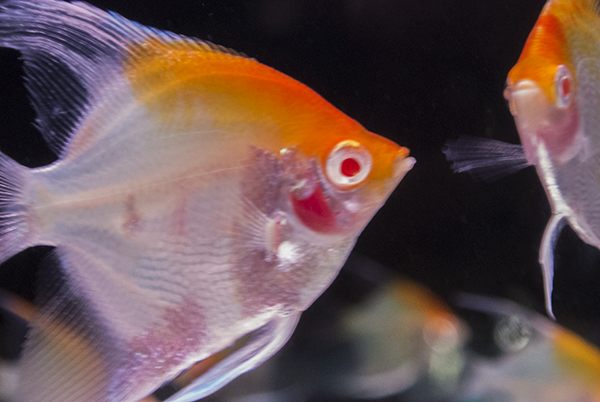 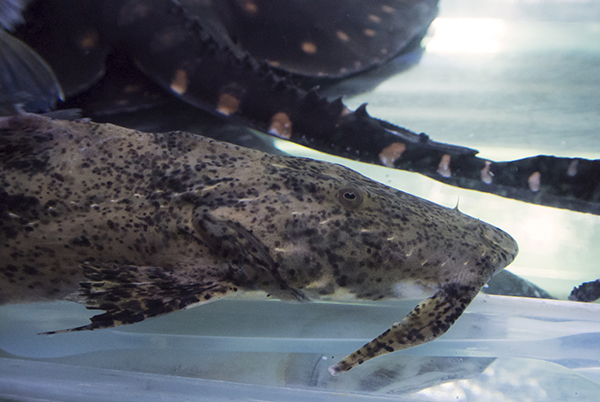 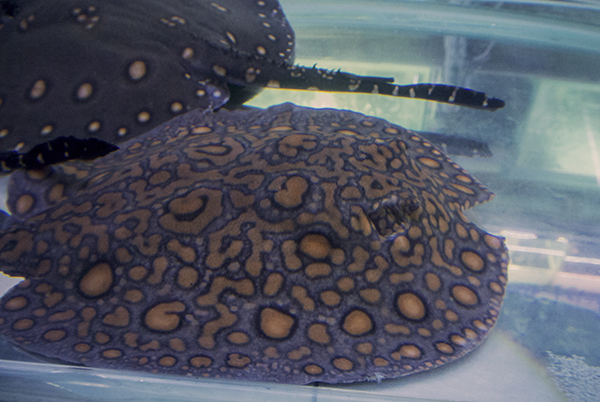