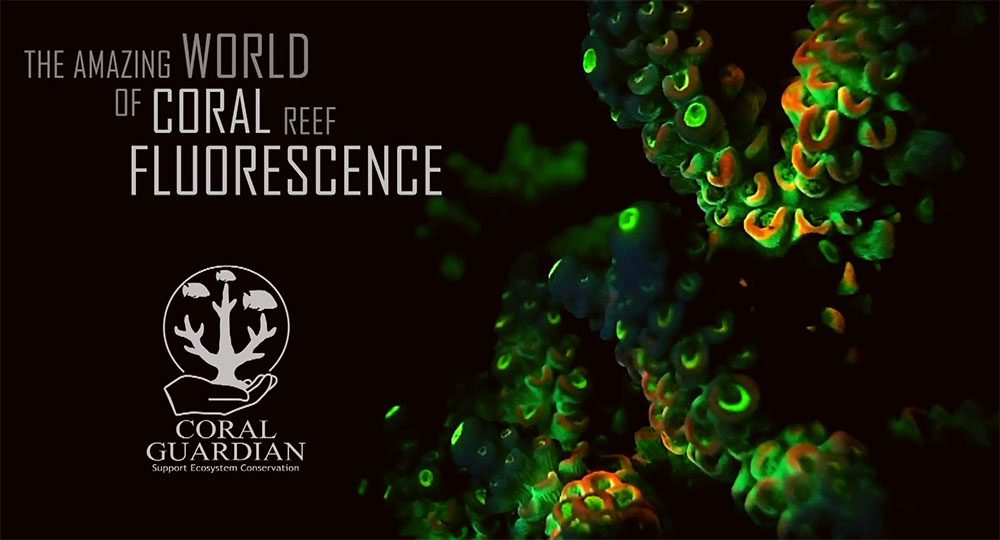 Coral Guardian seems to have embraced the concept of awareness leading to protection; to revisit and paraphrase the idea that we only conserve that which we know, understand, and cherish.

As most reef aquarists already understand, little in the natural world can hold a candle to the impressive visual impact of a fluorescing coral. Coral Guardian certainly builds on that with a currently 3-part series of videos released throughout 2013.

In April 2013, Coral Guardian released the first video with the following explanation:

“The ongoing study is part of a growing interest in coral fluorescence among the scientific community. Coral Fluorescence was recently found to be a strong indicator of coral health, and coral fluorescence can even be used to determine when coral larvae are ready to settle. The footage was captured using a super macro camera to study the biology of corals in question and microscopic fauna living among this mysterious ecosystem.

“Coral Guardian focus its research on coral reefs, marine ecosystems that protect coastlines, support tourism and provide nutrition to many island nations. The global deterioration in the quality of these ecosystems has been widely reported over the last 40 years, reflecting the complex interaction between climate change stressors (thermal anomalies, ocean acidification and storms) and chronic or acute local impacts (coastal development, pollution and over-fishing). But, some corals survive, and even thrive in the same conditions that rapidly kill others.”

The second video continued the series:

For those unfamiliar with Coral Guardian, they illuminated some of their  mission when describing this video series.

“Coral Guardian seeks to better understand the biological underpinnings of this variability by defining traits that associate with environmental sensitivity and resistance in corals, and with the resilience of reefs. Our goal in conducting this research is to contribute basic and applied scientific knowledge that expands understanding of how coral reefs function, and informs the management and conservation of these beautiful but threatened ecosystems.”

With the release of the third video, Coral Guardian added, “Many corals produce certain proteins that absorb higher energy blue and violet light. The absorbed light is the re-emitted at lower energy wavelengths such as the brilliant greens you see in this video.The exact function of these proteins is not yet known, but one theory is that they serve to protect the delicate coral tissues from potentially damaging light radiation (blue, violet, UV, etc.).”

I should of course mention that Coral Guardian is probably not the first or last group or individual to record and demonstrate the awe inspiring nature of coral fluorescence; I was instantly reminded of the breathtaking work done by Colin Foord / Coral Morphologic; one such example being this short “Preener” from 2010 (and their film Natural History Redux which was released earlier this year).

One thing is for sure – footage like this is certainly raising the bar for every at-home aspiring reef videographer!