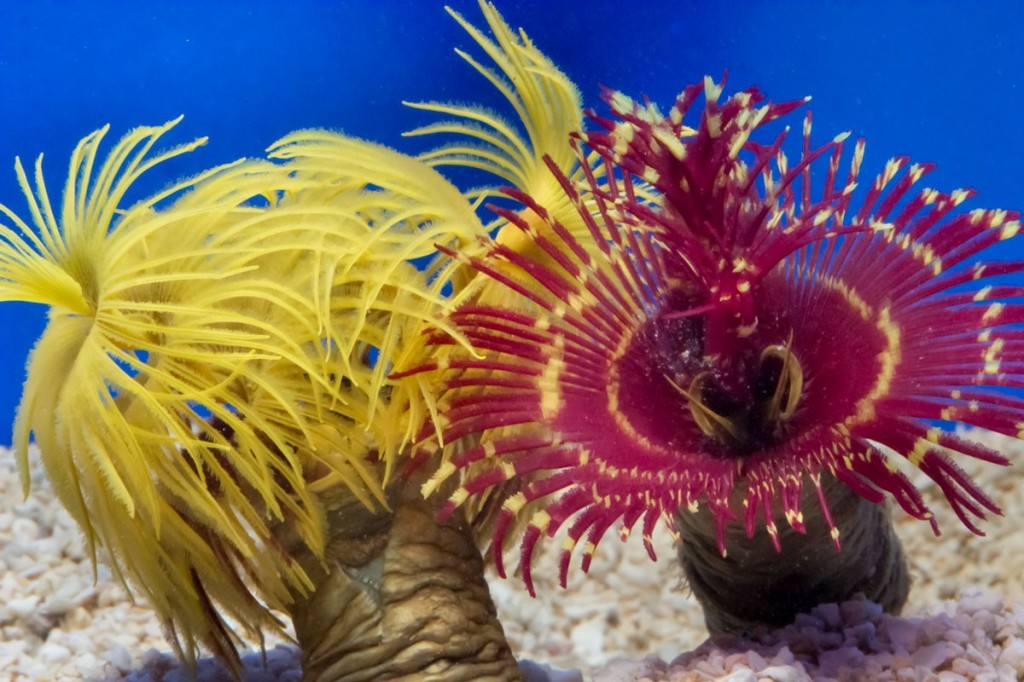 A Sabellastarte species (right) and another species of feather duster (left). Image by Ryan Shelander/A&M Aquatics.

Editor: This is Dr.Ron Shimek’s note about a image of feather dusters that recently arrived at A&M Aquatics in Lansing, Michigan, and were photographed by Ryan Shelander for a Rarities piece in the current issue of CORAL. Brian Wagner, also of A&M says these flamboyant worms are coming from Cebu, a busy collection center in the Philippines.

After examining the latest paper I could find on the Sabellastarte (Knight-Jones&Mackie, 2003), the red-crowned species is probably a Sabellastarte, and if so, the only species whose distribution includes Cebu is Sabellastarte spectabilis.   The spiral arrangement of the feeding crown on the yellow species indicates it is some other sabellid genus, perhaps, Bispira, but there are a couple others that it could be as well and without the specimens for examination, the determination of the species is impossible..

As regards feeding in feather dusters, it is now easier than it was ten or more years ago, in the sense that there are a lot of relatively good food sources around.  However, it never really has been hard to feed these worms, it just takes a LOT of phytoplankton, and hobbyists are generally loathe to buy as much as they need and even more they are loathe to feed it in the rather awesome amounts necessary.  These large feather dusters are not generally animals from clear water areas.

They most often live in green or turbid water with a lot of phytoplankton floating in it. They need to be in an aquarium that has a very evident green tint when viewed from a couple of feet away.  I’d suggest that keeping them in a nanotank of a few gallons where the water can be “greened-up” daily or more frequently is probably the only way they will get enough food to survive.

Mixing a few different types of phyto periodically will be good for them. Detritus in the water will not be. Any small detrital particles will be used to build their tubes, but they won’t be fed on. The typically live in sediments with the opening to the tube flush with the sediment surface, so implanted in an aquarium a deep sand bed is where they will do best, provided there are no hermit crabs, shrimps, or fish that would prey on the “feathers.” 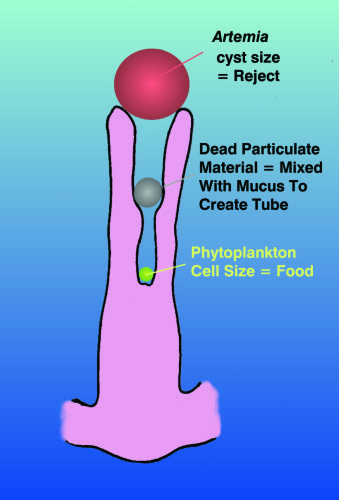 They filter the available food or those particles that get caught in the mucus of the feeding tentacles.  Here I have a simple diagram of a cross section through one of the fine tentacle branches, or radiole, showing the “V”-shaped upper surface of the branch, and showing how food sorting by size is done.

All of the particles are in a mucous layer and together with the morphology of the tentacle branch partitions, the particulate resource is sorted by size alone.  The composition of the particles doesn’t matter for feeding, they pretty much eat everything of the right size, but normally where the animals thrive, the only very tiny particles are phytoplankton.