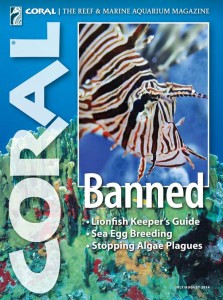 FEATURE ARTICLES
36     Lion tales – An aquarist’s guide to the genus Pterois and its kin by Scott W. Michael
48     Banned! New rules for Florida as it fights back against the worst marine invasion in state history by Ret Talbot
56     Origins of a biological calamity by Ret Talbot
66     Tracking an unprecedented invasion by Amy Benson
70     Eat Your Enemy — “Save a reef. Eat a lionfish.” by Ret Talbot
74     Bad news moves upstream by Ret Talbot
80     Breeding the West Indian sea egg: Tripneustes Ventricosus by Martin A. Moe, Jr.

AQUARIUM PORTRAIT
97     A reef wall in the living room – “It sounded impossible so I had to try it.”  by Dr. Annette Kotzur

BUY the July/August 2014 Back Issue of CORAL Magazine