In a very nice, easily understood, short paper , available online here, free of charge, L.Dougherty and collaborators examined the “disco flashing” seen in the edges of the mantle of the bivalve Ctenoides ales [commonly known as the “Electric Flame Scallop” in the aquarium trade; see disco flashing link, and video below – Ed].

Previously this glow was thought to be caused by bioluminescence, but they found that the clam is incapable of creating its own light, as it lacks the enzymes necessary for the process. Instead they discovered that the mantle edge contains two flap-like layers. One layer is filled with silica spheres averaging 0.30 µm ± 0.04 µm (mean ± s.d.) in diameter; the other layer does not have the spheres and is opaque to light.

They found that the silica spheres are nearly optimal reflectors for the blue light that predominates where the clam is found. These two flaps of the mantle act together to cause the brilliant flashing light that is characteristic of this clam. 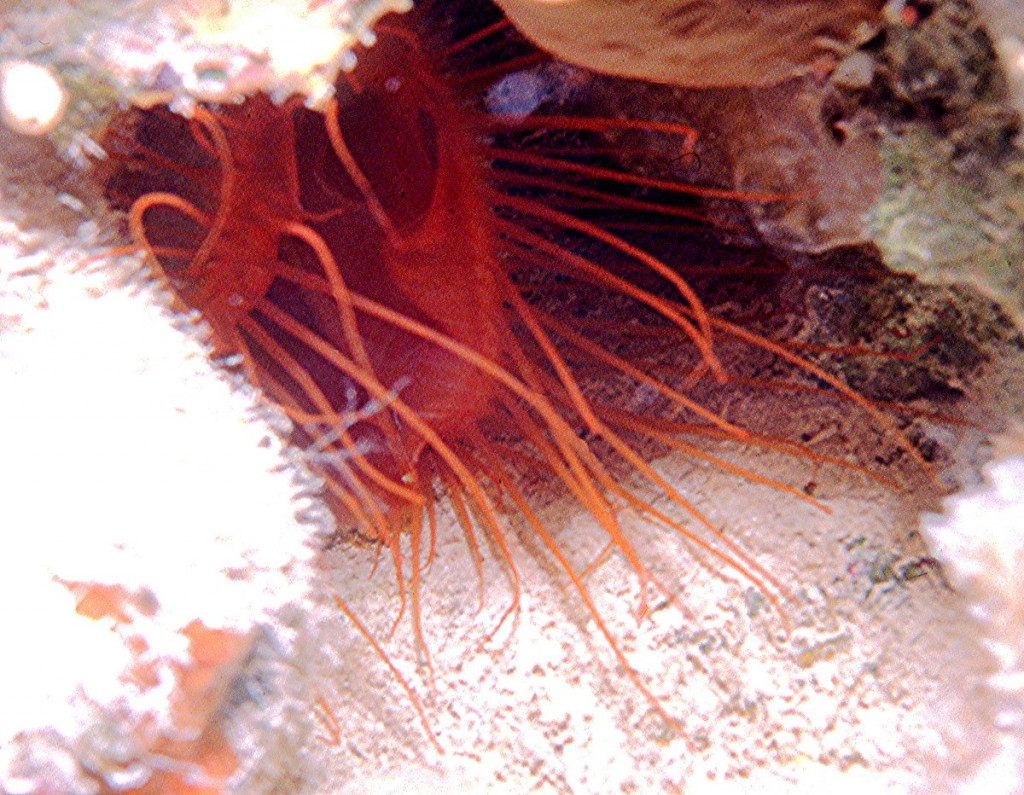 Ctenoides scaber (Born, 1778). Also known as Ctenoides scabra, and Lima scabra, this clam is sold to reef hobbyists as the “flame” scallop. They do not have the flashing light display, but otherwise appear identical to Ctenoides ales. Their survival in reef tanks is poor because of the lack of necessary phytoplankton.

This signaling process is unusual in a number of regards; very few animals other than sponges, some snails, pelagic copepods, and some weevils can metabolically manipulate and use silica. Additionally, the light flashing is a coordinated behavior between two tissue flaps of the clam, and produces specific flashing patterns.

The researchers are uncertain of the potential uses of the flashes. It is possible that the flashes of light could attract the swimming pediveliger larvae of this clam which would result in clusters of C. ales individuals. In field observations, they found the clams to be distributed in groups of two to four.  This might be a way to enhance reproductive success.

Additionally, the authors noted that quite a variety of marine animals could detect the flashing, including both sharp-eyed fish, cephalopods, and crustaceans as well as other animals that had less acute vision. The authors did some preliminary tests that showed as a stimulus was moved toward the clams, the flashing rate increased significantly, suggesting that the display might serve as an aposematic or warning or warning display.

The authors indicated that behavioral testing was underway to try to find out what is the function of  the flashing.

As with all filter-feeding bivalves lacking zooxanthellae, these clams would be very difficult to maintain in a clear water, semi-sterile, reef tank.  However, they might be rather easy to keep in a properly fed and filtered nano tank system.