Friday Photospread: After and Before – Diamond (Tetras) in the Rough

I’m making some changes in the fishroom; I’m thinking I’ll be doing some planted tank work, and with that, trying to breed some tetras just to see what I can do. To kick off these new projects,  two months ago I received a shipment of Diamond Tetras, Moenkhausia pittieri, from a regional source. The shipment was very well packed and arrived without incident.

I noted the condition of the fish upon arrival. They were small, thin, not terribly robust, but bright and active nevertheless. This didn’t strike me as unusual either; while it’s been a while since I’ve personally kept Diamond Tetras (probably 20 years), I always remembered them being a fish that came in a little rough around the edges, fish that had to grow on you (they are, for the record, one of my favorite tetra species).

It had been a few weeks since that first group, and ultimately I felt 15 wasn’t enough, so on a subsequent order I asked for another 15 to bring my school to 30. They arrived in pretty much the same condition as the first group, again, no big surprise and no complaints on my part. However, when I floated the bag and looked at the first 15 I had in the tank, that’s when the difference between the two groups hit me.

I’m kicking myself for not having taken photos of the first group so I could do proper before and afters. Instead, you’ll get the “after” photos from my first 15 from three weeks back, and then some “before” images from the second batch that arrived. You’ll have to take my word that the fish which arrived 3 weeks earlier were in comparable condition as the ones I photographed upon the second arrival. 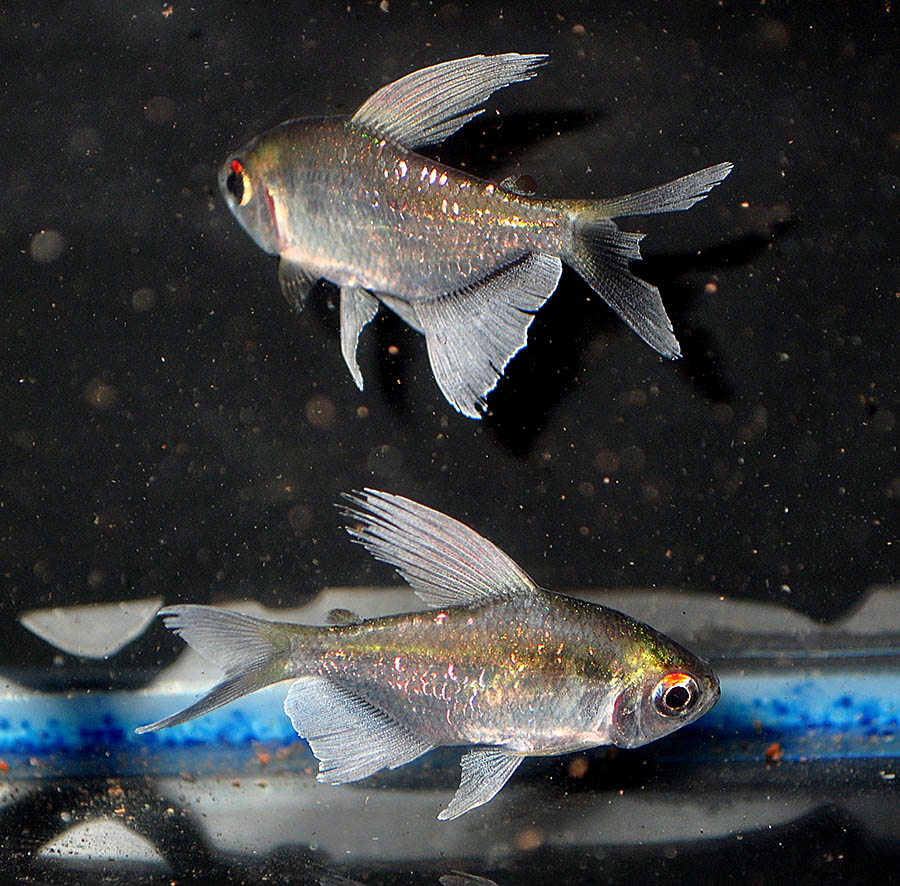 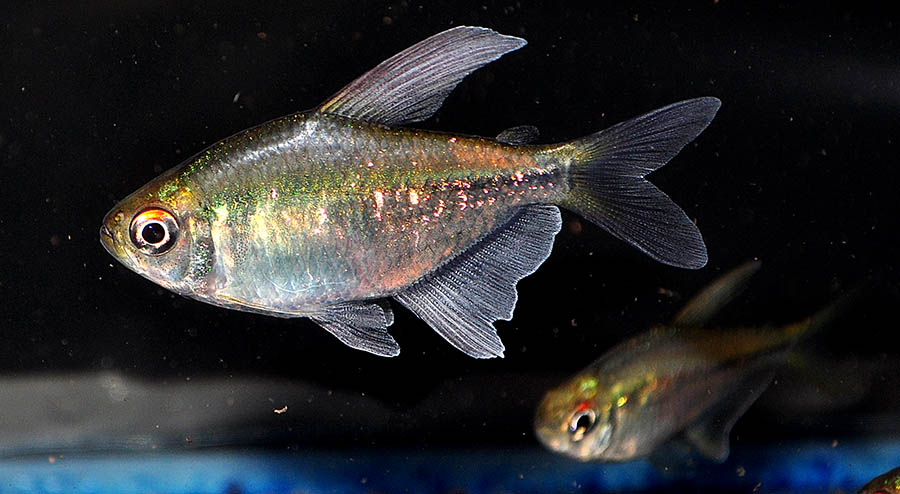 First and foremost, I’m not sharing this to brag, no sir. The Diamond Tetras in my care for the first 3 weeks did not receive any particularly pampered treatment; they were thrown in a 75 gallon aquarium with 8 Geophagus winemilleri, a pair of Peruvian “Altums”, and a half dozen Flash Plecos (Panaqolus albivermis, L204). Pellets and flake, pretty mainstain fare, is all they received. Anyone should be able to clean up and condition a fish in a similar timeframe. The differences are obvious and striking to me. Fin damage has healed, and the fish that were here for 3 weeks have completely restored their fat reserves and are filled out. The smaller females show the difference even more clearly. 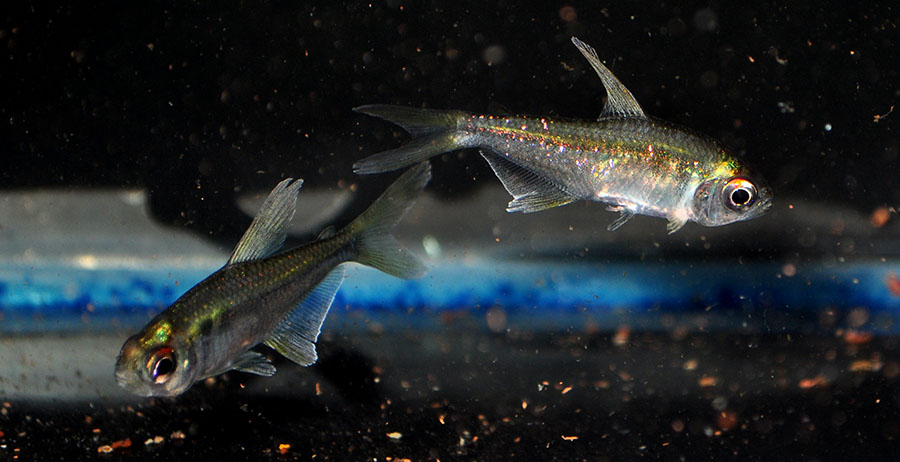 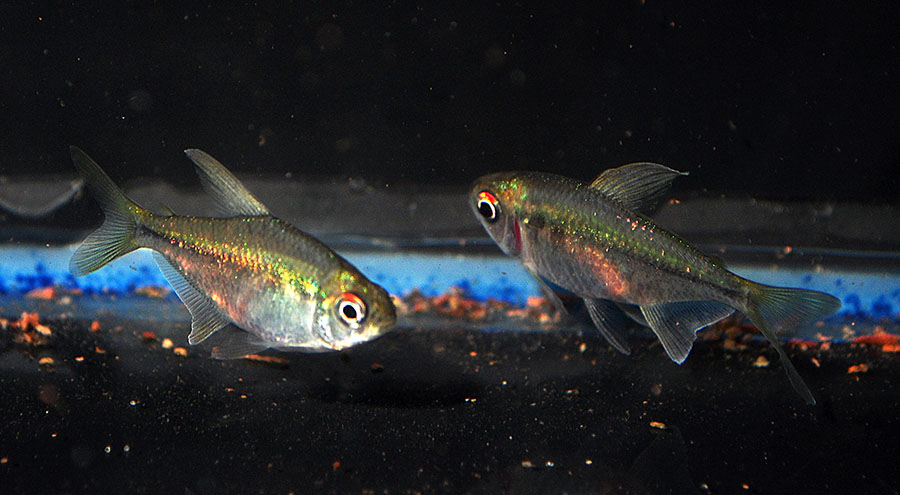 My mind was sent racing after seeing the stark differences of the fish’s condition when fresh the supplier, when compared to the ones I had received just three weeks prior. While an idea I already “knew”, this simply reaffirmed that the chain of custody is not the best long-term home for a fish.

We must remember that some fish (eg. marine fish) are routinely starved prior to shipment specifically to prevent defecation and waste buildup during shipment which would kill the fish. This might be even more prevalent in fish like a tetra, particularly if they are being sent on a long distance journey from a farm in Asia. Fasting fish prior to shipping is hardly an unique practice; I routinely fast my freshwater and saltwater fish for 24 to 48 hours before shipping.

When arriving at a wholesaler, fish perhaps live in a bit of a holding pattern as well. Since a wholesaler never knows when fish are going to be purchased and ship, multiple feedings throughout the day are probably out of the question; feeding is probably more of a maintenance mode. I don’t necessarily see the ‘wholesaler’ as the place where fish get comfortable. Not disparaging any wholesalers here, just acknowledging the realities of being in that business…tons of animals moving in and out routinely, with tremendous maintenance workloads and hectic shipping demands. Sick fish are certainly dealt with, but I feel it’s fair to say that fish are not given individual, pampered attention.

Of course, having worked in the retail side of the aquarium trade for some time during my youth, and again briefly in my mid twenties, I’m reminded of the care level often afforded to fish at a store. More importantly, I’m reminded of how quickly fish, particularly freshwater fish, may “turn over” at a shop, with new shipments of fish often arriving throughout the workweek in advance of the typical weekend retail rush. While the ratio of fish to caretaker is probably improved in the retailer setting, I think it’s still fair to say that most shop routines likely consist of a walk-through at the start and end of the day (not during shop hours), with a feeding in the morning as part of the walk through routine. A second feeding, and more importantly routine maintenance, gets squeezed in during the day when you’re not dealing with customers. Just like at the wholesale end of things, the retailer is hardly the place for someone to be staring endlessly at fish to assess their individual status. Unless a fish is something very unique, expensive, or was brought in knowing it had strict, demanding care requirements, the average fish at the shop is probably not coddled or babied much. 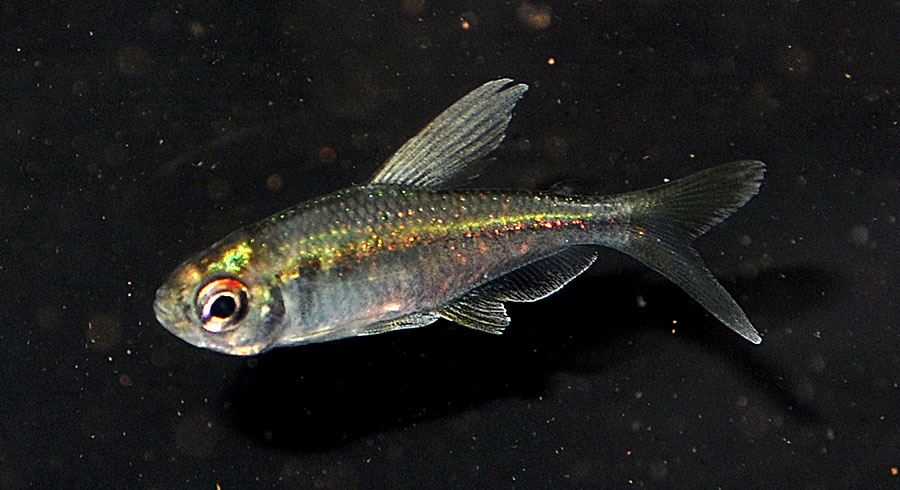 A small, freshly-arrived presumably female Diamond Tetra, from 5/22/2014 – this could have shown up at any retailer and been immediately offered for sale.

This means that in most every other shop, a Diamond Tetra like the above arrives at the store, goes into a tank, and 20 minutes, 2 days, a week later, if someone wants to buy it, the fish is sold. Generally the only time a fish isn’t offered for sale is when there is an obvious, outwardly detectable problem or unknown losses have been occurring in the aquarium.

I can’t really say I blame the retailers who work this way – for the most part the fish that come through the freshwater trade are healthy, without issues, and in the end the dice-roll of randomly selling a sick fish isn’t that risky. There are certainly problematic shops where issues seem rampant, but overall I’ve found most freshwater suppliers to ship healthy fish without issues, which suggests to me that the problems at the “box store” in town have a lot more to do with the “box store” than probably the company that supplies them.

But this is where the second revelation sinks in, and it’s somewhat “twofold” itself. I ask you – which of these fish would you rather buy? The ones that had just arrived, or the ones that I had  in my care for 3 weeks?

Resident Diamond Tetras, after 3 weeks in my care. Do you want these, or the ‘fresh’ ones I photographed?

Of course, if you were looking at these fish in two tanks, side by side, and the price was the same, you’d buy the ones I had for 3 weeks. Right?

Granted, if I told you that the 3 week ones would cost you 25% more, would you still buy them? At first glance I think a lot of folks might not, even though a 25% premium on a tetra might equate to $1-1.50 more per fish in this case. Then again, there is subset of the marine aquarium hobby that is more than willing to pay a premium price for well-conditioned marine fish, as evidenced by the success of LiveAquaria’s Diver’s Den.

While I don’t see many retailer’s looking at this side-by-side comparison and rushing out to build holding systems in the already jam-packed spaces behind their shops, there may be a lesson here for a new shop who is looking to break into a tough market. Having the ‘best fish in town’ might be the most easily accomplished not by finding some “secret supplier” that doesn’t exist, but rather by choosing to set up quarantine and conditioning aquariums where you hold new arrivals for a few weeks before putting your livestock on display for sale. No, you might not be able to charge a 25% premium, but you might get the reputation for having the better fish out there. In the aquarium world, word of mouth and reputation do go a long way.

In an ironic twist, as I sit here and type this, I’m reminded of the business model behind a new wholesaler that started up in the Midwest, who, seeing the exact same demonstration firsthand, established a business model of buy > hold and condition > sell. That extra ‘hold and condition’ step in there may be what pushes this new business beyond its competitors. To paraphrase, my father once told me that providing the best, to the people who demand the best, is a far better way to stay in business than trying to race to the bottom (now, he might not have said it quite like that, but that was his message).

Still there is another lesson to take away from this, and this lesson is for you, the consumer. Simply understand that the newly arrived fish in your shop’s tanks may very well not be at their best yet. That little gray nothing, or that young brown peacock, has a lot of hidden potential just waiting to be unlocked. Having the patience to make an investment in a fish, vs. simply looking for the instant gratification, may well save you some money and really show off your skills as an aquarist. But also keep in mind, that little gray nothing, that washed out fish in the corner of a retail display, may never see its potential if left in that environment.

In no way am I putting down the local fish shop when I say a fish may not rise to the occasion in their tanks, I’m just being realistic. Not every shop is feeding their fish 3-4 times per day, not every fish fairs well in the often sparsely decorated and crowded retailer’s tanks, and not every shop sits on their fish long enough to see generally good care come to fruition. Shops should of course do everything they can to improve their fish, but there are limitations.

Of course, I’m not encouraging our readers to accept substandard fish either, you have to know when a fish is simply tattered from the journey, and when a fish shouldn’t be bought (and “saving” a fish is always, ALWAYS a bad idea).

No, the lesson is squarely this: 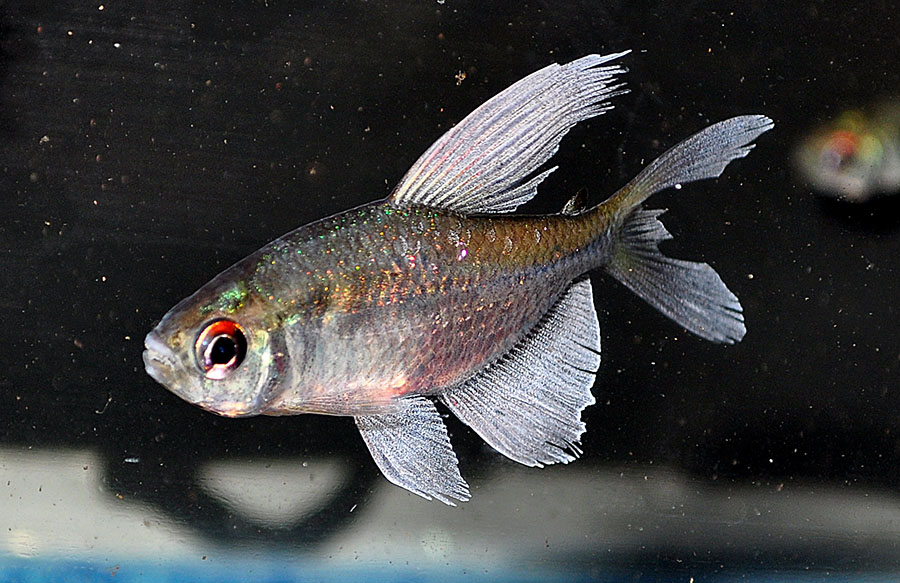 It may not be the best fish just yet, but with good care in you aquarium, it has loads of potential.

In case you didn’t read that caption, I’ll repeat – It may not be the best fish just yet, but with good care in you aquarium, it has loads of potential. It may have had a long, hard journey to get to you, and it may truly be a diamond (tetra) in the rough.

There’s one last lesson that I had already learned on the marine side of the aquarium hobby, and I’ve just now seen repeated on the freshwater side of things. Ultimately, the person in the best position to give your fish the best possible care will be you, the aquarist at the final destination for your fish. Provided you give your fish that best possible care, they will reward you in ways even I can only hint at.